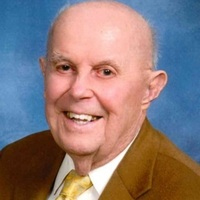 Robert Wittak Byerley, 105, of Wilmington, NC, passed away on August 21, 2020. Mr. Byerley was born in Humboldt, Kansas on the 29th of July, 1915. He served in the U.S. Army during WWII and was honorably discharged as Captain Robert W. Byerley. He attended Oklahoma State and Harvard School of Business for his Masters.

Mr. Byerley’s first wife, Ellen Flemming, had two children, Bert and Brenda Byerley. Ellen passed away on June 1st, 1960. At the time of Ellen’s death, Mr. Byerley was working for Standard Oil of NJ. He and his family were located in Lima, Peru. He moved his family back to the U.S. settling in Blytheville, AR, where he met and married Anne Mae Long. They moved to Garden City, NY shortly after. Mr. Byerley worked with the Exxon Corporation in Manhattan, NY until retirement. Then the Byerley’s moved to Pinehurst, NC. He became quite active in Sandhills Community College’s Computer Program. At the time, he was a Consultant with Aramco in Saudi Arabia. The Byerley’s spent the next 6 years traveling the world, coming and going from Saudi Arabia.

In 1995 they moved to Plantation Village, Wilmington, NC where retirement really kicked in. Golf, Bridge and socializing with new friends took most of their days. In 2005 Anna Mae passed away. The last years of his life were spent with friends and family. There were a few trips with help from his daughter, Brenda, to some of his beloved places. One being Vancouver Island, BC, and the other Pinehurst, NC. He attended the naming of the Byerley Auditorium at Sandhills Community College, an honor he greatly appreciated, from his years of contribution to the Computer Science Program.

His last move was from Plantation Village to Davis Nursing Home, where he passed away on August 21st, 2020.

He is preceded in death by his grandson, Robert Byerley; great-granddaughter, Alicia Rix; and great-grandson, Justin Smothermon.

He was well liked in all of his communities.

His family greatly loved him and he will be missed dearly.

A Memorial Service will be posted in the future due to the complications COVID-19 has presented us all.