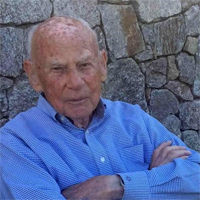 Richard Thorne Scully, a longtime resident of Garrison, passed away on October 25, 2022, aged 98.

Born on 15 April 1924, in New York City, Richard was a man of the world, with intellect and wit. He was a lover of classical music, animals and nature, and was singularly unimpressed with pretension or the trappings of success.

Richard was a Harvard educated international tax lawyer for Aramco and Phillips Petroleum, in Saudi Arabia, London and New York. In Saudi, he brewed liquor from a still (which he later used to make maple syrup with his daughter Caroline in rural NY state) for the raucous parties he and our mom threw on their boat, an Arab dhow- the Nefertiti, on Half Moon Bay, in the Persian Gulf. They laughed (after the fact) about once being chased for hours by the Saudi authorities across the open desert in a jeep when they skirted a border outpost on return from the United Arab Emirates.

He served our country, as a lieutenant in the Air Force during World War II, first as a weatherman and then as a navigator on a B-24 bomber, guiding the plane by reading the maps and the stars.

When his father died at a young age, his bohemian, adventurous mother moved with him and his ailing brother to France, first in Paris and then Six-Fours-les-Plages in the south. After moving back to New York City when he was six, they lived in Gramercy Park and he attended the Little Red Schoolhouse and later Friends Seminary, where he made lifelong friends.

Richard met his wife, Bernice, while he was at Harvard Law School and she was working on a study at Massachusetts General Hospital, where he was a participant. After a camping adventure in the Maine woods together, they were married soon afterwards, settling in New York City.

Always after adventure, within a few years, they moved to Dhahran, Saudi Arabia where he worked for Aramco for seven years and had their first child, Caroline. They then returned to New York City, where their son, Richard Alan, was born.

Richard's craving for exploring the world eventually resurfaced and, after he and Bernice lovingly restored "Rock-Hurst", a wonderful run-down Victorian house in the town of Garrison, NY, a hamlet with one general store on the shores of the Hudson River, they moved the family to London. While there, the family would embark to the New Forest on camping trips, navigate the winding streets to attend soccer games and rock concerts, and take road trips throughout the U.K and Europe.

Eventually, in 1978, they returned to their home in Garrison, where Richard volunteered with the Ambulance Corp and the Audubon Society and dabbled in options trading. Finally, Richard and Bernice moved to Washington DC in the 1990's, where Richard pursued residential real estate development.

Richard is predeceased by his parents, Raymond Scully and Ellen Kiely, his brother, Alan Scully, and his beloved wife, Bernice Scully (Joseph). He is survived by his son Richard Alan Scully, three grandchildren, Madeleine, Beckett, and Bridget, and his daughter, Caroline Scully and her partner, Jim Niedbalski.

He was a devoted husband, father and grandfather and we shall miss him terribly. He was loved deeply.

Funeral Arrangements are under the direction of Clinton Funeral Home- Cold Spring.