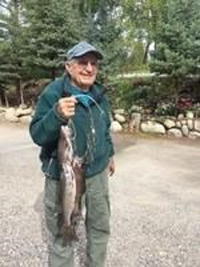 Bellingham, Washington - Reggie McClung was born on June 12, 1925 in West Monroe, Louisiana. He passed away at his home on Lake Samish on December 29th, 2020, on what would have been the 70th anniversary of his marriage with his beloved Betty. His parents were John Doyle (J.D.) and Ada Jannette Joiner McClung. His family moved from their 5-acre home in Clayburn, Louisiana to Pampa, and then to Dumas, Texas as his dad followed construction jobs. In his youth Reggie was a featherweight boxer, captain of his football team and tore up the dance floor, winning many Jitterbug competitions.

In 1943 Reggie joined the US Army. The night before his unit was to be shipped out he fell down some stairs after a night of partying. He ended up in the hospital, missing the disembarkment. Later Reggie found out that his unit went straight to France to participate in the Normandy invasion. Reggie said that even though he was very close to the men in his unit he never heard from them again. He assumes that most of his buddies were killed in that invasion. On December 29, 1950 Reggie married his life-long love, Betty Cator of Morse, Texas in Eunice, New Mexico. In 1953 Reggie & Betty moved to Lake Stevens, WA as they followed construction. In 1955 Reggie and Betty bought an old summer cottage on Lake Samish where they lived until their deaths. Reggie helped build the Mobil refinery in Ferndale and the Texaco refinery in Anacortes. Reggie and Betty lived in Ras Tanura, Saudi Arabia from 1978-1980 when Reggie worked for Aramco. After retiring from Texaco in 1985, Reg and Betty spent their retirement years traveling between their home on Lake Samish, their park model in Sky Valley of Desert Hot Springs and their trailer at Lake Pearrygin. Betty & Reg were active members of Calvary Temple and then Hillcrest Chapel in more recent years. Reggie loved to hunt and fish throughout his long life.

The cornerstone of Reggie's life was his deep, abiding faith in the Lord Jesus. His love for God produced a man rich in wisdom, kindness, generosity and humor. His wife Betty, their family, and their many friends found inspiration, compassion, strength, and laughter in his presence. Walking with God and loving his family and friends were the hallmarks of his 95 years. Those he leaves behind to follow his path are his legacy.

Days before his beloved wife and best friend passed away, Reggie held her hand, kissed her gently on the lips, and said, "It looks like you're going to make it home before I do, but you save me a place. I won't be far behind." And five months later, just in time for their 70th anniversary, he kept his word. Reggie was preceded in death by his wife Betty earlier this year on July 28th and his older brother J.D. McClung. He is survived by his sister Naomi Garret and younger brother Mel (Tommie) both of Dallas, his son Steve McClung of Anchorage, Alaska, daughters Penny (Kim) Sherwood and Letha (John) Kerl, both of Bellingham. He is also survived by 10 grandchildren and 16 great-grandchildren.

Reggie's family would like to thank the Whatcom Hospice care team for their tender loving care of both Reggie and Betty during the last year of their lives and for their support of our family. Whatcom Hospice provides crucial emotional support to families who face the approaching death of a loved one. We are grateful for the service this amazing organization offers families in our community.