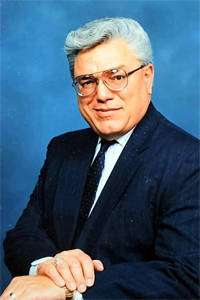 Phillip "Bud" Lyons Sr, 80, of Alvin, Texas passed away on Wednesday, October 26, 2022 at The Phoenix Post-Acute in Texas City, Texas. Bud was born November 22, 1941, in Gueydan, LA to Joseph Bosman and Elder Marie (née Richard) Lyons. He graduated from Sulphur High School in 1959. In 1962, he married the late, Wynona Meyers, also of Sulphur. Later that year, they had a son, Phillip, followed by a second son, Wilton, in 1970.

Following a stint as a roughneck for the Grady Roper Drilling Company in Gueydan, Bud embarked upon a career in the insurance and benefits industries, working for the American National Insurance Company in Galveston and Aramco Services in Houston. Along the way, he earned his bachelor’s degree in business administration (1997) from the University of Houston and his CPA certification.

In 1991, Bud married Regina (Gina) Johnson (née Malloy) and, in doing so, became father to Jennifer Johnson and Tracey Escamilla (née Johnson). In addition to being an active and supportive father, husband, and, later, grandfather; he was active in his community, serving in the Jaycees, Knights of Columbus, Masonic Lodge, Order of Eastern Star, and Arabia Shrine. He was particularly good with small children, who were inevitably drawn to him.

A Celebration of Bud's life will be held at Hixson Sulphur Memorial Funeral Home on Tuesday, November 1, 2022, at 10:00am, with Deacon Patrick Lapoint officiating. Visitation will be at Hixson Sulphur Memorial Funeral Home on Monday, October 31, 2022, from 5:00 pm until 8:00 pm. Visitation will resume at the funeral home on Tuesday, from 8:00 am until the time of the service. Burial will follow at Roselawn Cemetery in Sulphur, Louisiana.