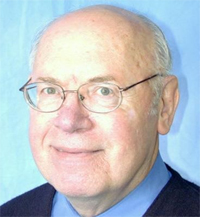 Kaukauna - Rev. Paul Yaroch, OFM Capuchin friar and priest, died on 7 November at the age of 84. Paul was the son of Paul and Stella (nee Nadolski) of Port Austin, Michigan.

Paul was invested in the Capuchin habit in 1955, perpetually professed in 1959, and ordained a priest in 1964. His ministries included pastoral service at St. Benedict and the former St. Elizabeth parishes in Milwaukee. He also served as a half-way house director in Milwaukee. While here he also worked as a cab driver. For two years he did pastoral ministry ARAMCO in the Middle East. He did ministry in Warren, Baraga and Detroit, Michigan, as well as hospital chaplaincies in Michigan and Wisconsin. His last ministry was as chaplain at the Boyle Apostolic Center in Fond du Lac, Wisconsin. He retired in 2004.

He is survived by his brother Irvin (Bonnie) Washington MI; and his sister Mary Davis (Sterling Hts. MI), as well as nieces & nephews and his many Capuchin brothers with whom he lived, prayed and ministered for over 65 years.

Besides his parents, Paul was preceded in death by his sister Bridget Smukola (& Kenneth), and his brother Melvin (& Susie); and brother-in-law Lawrence Davis.

Visitation will be on Tuesday, November 10, at 12:30 pm, Holy Cross Church, Mt. Calvary WI, with the Liturgy of Christian Burial at 1:30 pm.