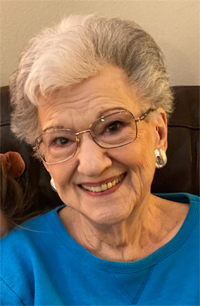 Martha Irene Brush Moore was born in Emsworth, PA on March 30, 1924. She and her parents moved to Houston when she was eight years old which is also when she got her first piano. She is survived by her two daughters and Son-in-laws, Marty Moore Sosa (Lenny), Lucy Moore Turner (Edward), her three grandchildren James Clinton Hughes (Kristina), Lauren Turner Gooler (Bill), Allyson Turner Doherty (Joe) and her three great grandchildren Abby, Will and Emmy Gooler. Her husband of 62 years, Clinton Sykes Moore preceded her in death in 2007. His employer, Exxon, sent them to Saudi Arabia where they lived for five years, making wonderful memories and lasting friendships while there.

Martha attended the University of Houston where she studied music and drama. In fact, in her sophomore year, she was voted one of the ten outstanding students! Church was always a big part of her life. Singing in the choir, and being active in her Sunday school classes including St. Paul’s United Methodist Church in Houston, where she and her husband met and were married. Upon returning from Saudi Arabia, she and Clint attended First Methodist Church Downtown for over 20 years singing in the choir and enjoying the friendships developed in the Adelphi Sunday School class.

In 2010, Martha moved to Spokane to live with her daughter and son-in-law Lucy and Edward Turner and began attending Whitworth Church with her family where she made loving new-found friendships in the church and particularly her Bible study group. On numerous occasions she played the piano for the ladies’ monthly brunches. She always enjoyed sharing her gift of music and song with anyone who would listen. One year she even brought back her dramatic talents and participated in the Best Christmas Pageant Ever play at the church.

Martha lived a full and blessed life and while she will be missed, we are confident and grateful that she has found her forever home with Jesus and all those who have gone before her. In lieu of flowers donations can be made to Corbin Senior Center, 827 W. Cleveland, Spokane, WA 99205 Attn: Jessica Bockellie or Adelphi Class c/o Craig Lamb, 10605 Willowgrove Dr., Houston, Texas 77035.