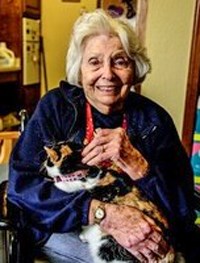 Marguerite Louise Kendall Owen, née Hones, passed away peacefully in her sleep on September 13, 2020. She was 96 years old. Known as ‘Sis’ to her immediate family and ‘Peg’ to her myriad of friends, she was predeceased by her parents Edward and Cornelia Hones, by her brother Edward Hones Jr, by her first husband Barry Kendall, and by her second husband Clyde Owen. She is survived by her children Philip (Virginia) Kendall of Minnesota, daughters Catherine Simkunas and Lisa Kendall both of Texas, and by her son Jonathan (Jeanne) Kendall of Texas. She is also survived by her nine grandchildren – Brian (Ligia) Kendall , Anneliese (Timothy) Wedin, Benjamin (Mari) Kendall, Quentin Kendall, Robert (Cheavla) Simkunas, Jonathan Kendall Jr., Amelia Kendall, Katelyn Kendall, and Kimberly Kendall – and five great-grandchildren (Alexandria, Cassandra, Tomio, Eri, and Nora.)

Peg was born and raised in Roscoe, NY. Upon graduating from Roscoe Central she went on to Duke University and then to Duquesne University to study nursing during the war years.

She left school to marry Barry in February of 1946, and they moved to Indiana for Barry’s studies. Here Phil was born. Upon Barry’s graduation they moved to California where daughter Cathy joined her family. There medical issues left Peg and Barry in financial straits and they decided to solve the problem by his taking a position with Aramco in Saudi Arabia. Moving overseas was her first step to becoming a ‘woman of the world’, traveling internationally to and fro and during vacations. It was in Arabia where she welcomed Lisa to the clan. Leaving Aramco in 1959, Peg and Barry became truly itinerate, moving every several months from California (where Jon came into the picture) to Texas to Illinois – and on and on. Peg doted on this lifestyle, enjoying each location and the new friends. They temporarily established roots in New Jersey for seven years in the sixties, where Peg completed her B.A. in Social Work, but she admitted later to being restless. That was resolved by going on the move again to Illinois, Mexico, Texas, and back to Saudi Arabia. Retirement in the early eighties left her and Barry in Nacogdoches, Texas with an empty nest and time to travel around the country visiting friends and family while participating in art shows.

Barry’s death in 1991 left Peg adrift for several years, but she reestablished a friendship with Clyde (‘Slim”) Owen and she moved to Harlingen, Texas where she and Slim ultimately married. She enjoyed many fine years with Slim, and felt blessed to now have inherited a second family to include Slim’s son Clay (Gloria), his daughter Judy (Burton) Davis, his son ‘Mike’ (Mary Dell) and his daughter Caron (Greg) Sowers. She continued her travelling with Slim (but not relocating!) with trips to Alaska, Cuba, Kenya, and New Zealand as well as extensively touring around the continental U.S. She made her final move in 2015 when she lost Slim and decided to go back to Nacogdoches to be close to her daughters Cathy and Lisa. She initially thrived in her assisted living facility, but her situation worsened with falls, surgery, and Alzheimer’s. Extra attention and loving care by her private attendant Donna Humphries alleviated the trauma but couldn’t halt the progression.

It was in her first stint in Saudi Arabia that Peg took up a ‘hobby’ that was to become a passion for the remainder of her life – art. There she took painting lessons from a local artist and enrolled in a correspondence school for drawing/painting. Her primary medium was oil, but she also did many works in pastel, watercolor, and charcoal. Her favorite subjects were people, doing portraits or scenes based on photographs taken in Saudi Arabia, Mexico, the American west, and other locales. She was active in art leagues and organizations as she moved from town to town, especially the ‘Texas Wild Bunch and the Harlingen Art Forum and its D’Arte Centre Gallery.

Peg’s request was to be cremated, like both of her husbands before her. In view of the current pandemic, no memorial service is planned in the near term. Peg was a religious person, active in many churches as she moved around the world, and she was a tolerant, generous person. Those who feel so inclined might thus honor her memory with a contribution to your local church, synagogue, mosque, etc. or to your local animal shelter, veteran’s organization, or food shelf.