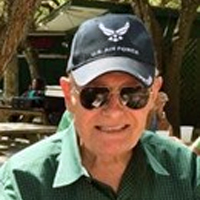 Major Lloyd D. Herman Jr., (USAF Ret.) age 91, took his last flight home to be with Jesus on Wednesday, May 15th. He was at his Sarasota home surrounded by his loving family.

In June 1947, Lloyd joined the Air Force serving his country with courage and devotion to duty while earning the Distinguished Flying Cross for his skillful flying and many other marks of honor for his military heroism. After retiring from the Air Force in 1968, Lloyd owned and operated an aviation business, Venice Airpark. He spent another 30 years working abroad in the Middle East for Saudi Aramco in Dhahran. His numerous years abroad led to him leaving his everlasting mark on many people around the globe.

After retiring in 2007, Lloyd loved spending time with his loving family, flying, and sharing the countless stories he had collected throughout his life. Lloyd is survived by his beloved wife, Betty Herman; sister: Dorothy Masters; son: Steve Herman; daughters: Susan Svadlenak (Larry), Debbie Hasty (Brad); seven grandchildren; three great grandchildren; and many nieces and nephews. Lloyd is dearly loved and will be missed by all who knew him. Service with Military Honors will be held on Friday, June 21, 2019 at 10:00 A.M., Sarasota National Cemetery. A light luncheon at South Trail Church of Christ will be served after the service.