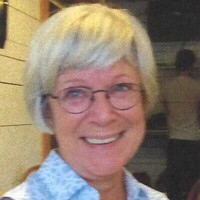 Linda was born in Ringgold, Georgia and passed away in an assisted living facility in Zephyrhills, Florida.

She is survived by her husband of 55 years Barry, daughter Veronica, son Gregory, three grandchildren, one great granddaughter, two sisters and a brother.

Linda joined the Army after high school where she was trained as a practical nurse. When she returned to the bay area, she worked as a Laboratory Tech. at Mount Park and Tampa General Hospital. Barry and Linda were married in 1967. She used her military benefits to go back to school eventually receiving a BS degree in Business. She worked various jobs until Barry accepted a job with ARAMCO in Saudi Arabia in 1985. They spent 10 years in Saudi and traveled the world, returning to the U.S. in 1995. Linda eventually took a job with Home Shopping Network managing their telecommunications. In 2006, Linda and Barry retired and moved to Mexico, where they lived for 11 years. They returned to the U.S. when Linda's mental condition began to deteriorate.