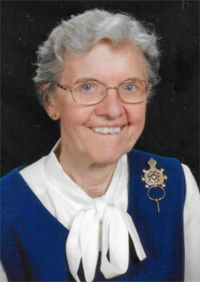 Katherine Gurney Crawford, known as Kate, passed away after a short illness on October 4, 2020 in Boulder, Colorado, surrounded by her children. Kate was born in Resht, Iran to F. Taylor Gurney and Henrietta Pritchard Gurney on January 19, 1928. Her father had moved to Tehran in the 1920's to teach at the former Alborz College, and the family was associated with the Presbyterian Mission and the US Embassy. The Gurneys were known for their love of the Iranian people, language and culture. She received a BA in French in 1950 from Wooster College in Wooster, Ohio and then worked in Tehran and New York City with several cultural and educational institutions. In 1956, she met John Pickard Crawford "Crif," a geologist whose family had been educators in Lebanon since 1857. They were married from July 1957 until his death in December 2019. They lived in Illinois, where son John (Jay) was born, and then spent ten years in Libya with Esso, now with daughters Laura and Lydia.

In 1970, the family returned to the US where Crif spent two years working in New York City with Standard Oil (Exxon). In 1972, they moved to Dhahran, Saudi Arabia with ARAMCO (now Saudi ARAMCO). Kate served as a Brownie and Girl Scout leader, Sunday School teacher, and Women's Club volunteer, and sang in a number of choirs and choruses. She was a gifted seamstress. In Dhahran, she worked in the school library and as ARAMCO's first registrar for the University of Indiana Distance Learning MBA program. She was a survivor of breast cancer.

Crif and Kate retired to Boulder, Colorado in 1993 where Kate led a life filled with book groups, hosting visitors from near and far, volunteering at the Boulder and University Libraries, as a local elementary school Reading Buddy, and as a newborn hearing screener at Boulder Community Hospital. In 2007, Kate and Crif moved into Frasier Meadows Retirement Community, where she continued her volunteering in the gift shop and proffering books from a lending cart in the Skilled Nursing Facility. She was an active member of the Atonement Lutheran Church congregation, singing in the choir, volunteering in the church office and baking bread for communion. Kate provided a quiet balance to Crif's vocal activism.

Most recently, Kate was a resident in the Assisted Living/Memory Care Unit at Frasier Meadows, and her family is very grateful for the loving care and attention she received from its dedicated staff members. She will be greatly missed by Jay, Hilary and Madison Crawford of Midland, Texas; Laura Crawford and Chip, Archie, Kate and Grace Adams of Madison, Connecticut; and Lydia Crawford and Phil, Owen and Vivian Davies of St Paul, Minnesota; and younger siblings, Frank Gurney of Naples, Florida, Anne (Jonnie) Dungan of Knoxville, Tennessee and Margaret (Margy) Liske of Hudson, Ohio, and their families. She was predeceased by her older brother Clifford. Donations in her memory can be made to the Boulder Library Foundation at https://boulderlibrary foundation.org/donate-to-blf/. A celebration of her life will be held at a later date.