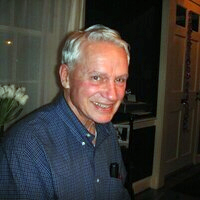 Born in 1939 in Long Beach, California, the son of the late Henry Gorski of Vineland, New Jersey, and Virginia deLuca of Westchester, Pennsylvania, John was raised by his grandmothers, Ethel Sibert and Stella (Janicki) Gorski, and his aunt, Ellen V. Gorski, in Haverford, Pennsylvania, and Newport, Rhode Island. After high school, John served in the U.S. Army with distinction and then attended Drexel University, receiving a degree in Civil Engineering. John and Kathryn met in Philadelphia, while she was in nursing school and he was at Drexel. They started their family in New Jersey, but after a brief stint in Upper St. Clair, Pennsylvania, settled in Saudi Arabia in 1977, when John started a long career with Saudi Aramco.

John and Kathryn stayed with Saudi Aramco for the next 22 years, making many lifelong friends while living in a variety of cities, including: Abqaiq and Dhahran, Saudi Arabia; Pasadena, California; London, England; Calgary, Alberta, Canada; and Kansas City, Kansas. John and Kathryn’s adventurous spirit took them on global travels, allowing John to indulge his enjoyment of the outdoors and his skills as an avid athlete. While enjoying annual family ski vacations, John – always looking for the next challenge – took up mountaineering, and climbed in Austria, France, Tanzania (summiting Mt. Kilimanjaro), and fulfilled a dream of scaling a portion of Mt. Everest. Frequently, friends would see the Gorski family playing tennis, hiking, biking, running, skiing, and scuba-diving together, and the family joke was: “the family that [insert an activity] together, stays together.”

Although John enjoyed new challenges, his unwavering passion was sailing, with John and Kathryn taking their family out on the water at every opportunity. When in Saudi Arabia, John sailed his catamaran and windsurfed in the Arabian Sea, while vacations had him sailing in his home port of Newport, Rhode Island, the Seychelles, Turkey, and the Caribbean. John and Kathryn retired from Saudi Aramco in 1999, settling in Merchantville, New Jersey, to be near family and friends. Unable to stay retired for long, John convinced Kathryn to move to Annapolis, Maryland, so as to sail their boat as often as possible, while he continued consulting as an engineer. While living in Annapolis, John was able to fulfill another dream of completing the Newport Bermuda Race. He sailed with many family and friends over the years, some of whom were lifelong sailors like him and others who were more passengers than crew, but he always enjoyed sharing his passion with them.

Relatives and friends are invited to attend his visitation on Saturday, July 2, 10 to 11 AM at the FOSTER-WARNE FUNERAL HOME, 820 Haddon Ave., Collingswood, NJ 08108. Memorial service will follow at 11 AM. Inurnment Calvary Cemetery, Cherry Hill, NJ.
In lieu of flowers, please consider donating to the Chesapeake Bay Maritime Museum, located at 213 North Talbot Street, St. Michaels, MD, 21663.