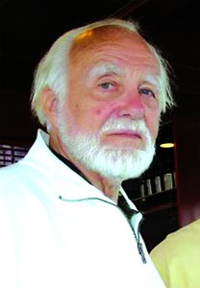 Johannes J. van de Graaf died peacefully on Tuesday, November 30, 2021, at his home in Lynchburg, Virginia. He was 94. Born in Vriezenveen, the Netherlands on January 10, 1927, he was the third of three sons born to Jacob van de Graaf and Susanna Maliepaard van de Graaf. He was predeceased by his parents and also by his brothers, Simon and Jan.

Hans was known for his brilliant creative mind and keen wit, intellectual interests, mastery of language, and as a lover of classical music and jazz. He was a voracious reader, a tinkerer and a dedicated family man.

His childhood in the Hague was marred by the untimely death of his father and by the Nazi occupation of Holland. Severe food shortages and other deprivations led him to develop creative solutions to problems and aroused in him a compassion for those in need. During night time blackout he honed his English language skills by listening to the BBC on a clandestine radio. In his youth his adventurous spirit led him to explore Europe and England on his bicycle and to skate long distances on the frozen canals of Holland.

Hans received a meritorious scholarship to Delft Technical University, the Netherlands, graduating with a Master of Science Degree in Electronics Engineering in 1950. He then served his obligatory two years military service as an officer in the Royal Netherlands Army Signal Corps. While home on leave, Hans met the love of his life and future wife, Ann Rushby, of Tanzania, East Africa. The couple married in the Hague in December 1953.

Following military service, Hans worked in the Netherlands for a short period doing research for the Dutch PT&T and Siemens before accepting a position with ARAMCO (Tapline) in Beirut, Lebanon. For two years he worked securing communications along the oil pipeline from Arabia to the coast, occasionally taking opportunities to travel with Ann throughout the Middle East and Egypt. The experience of working for an American Company and making American friends encouraged him to emigrate to the United States.

In 1956, after the birth of a son, the young family settled in Syracuse, N.Y. where Hans worked for General Electric as a principal design engineer. It was the time of the Cold War, and he worked on secret communication systems for the distant early warning DEW line. In 1959 GE moved the division to Lynchburg where Hans worked on equipment essential to manned spaceflight and cryptography - making frequent trips to Cape Canaveral in Florida. During the summers he took his growing family on memorable camping trips.

After the close of the Advanced Telecommunication Systems Division in 1972, Hans remained in Lynchburg working as a senior design engineer for GE's Mobile Radio Division and ultimately as Senior Scientist of Ericcson/GE, retiring in 1997 at age 70. He was the principal author of many U.S. patents which remain the foundations of today's modern telecommunications world.

Hans became a naturalized United States citizen in 1979 and never missed an opportunity to vote. He was also known for writing succinct letters to the editor of the Lynchburg News and Advance.

Upon his retirement, Hans enjoyed traveling, both international and domestic, experimenting with sculpture, tuning his sports cars and motorcycles, and tinkering in his basement. He was perhaps happiest exploring area backroads on his mid-size motorcycle.

The family would like to thank Centra Hospice and Generation Solutions for their loving care and support during the past year.

A memorial service will be held at St. John's Episcopal Church at 1 p.m. on Saturday, December 18, 2021, followed by a reception in Magill Hall. In lieu of flowers, please consider contributions to the Salvation Army, 2215 Park Ave., Lynchburg, VA 24501, Lynchburg Public Library, and local Public Television and Radio Stations.