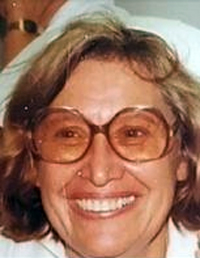 N. Jean Leamy, 94, died on April 2, 2020 at Aspen Rehabilitation Center in Meridian, Idaho, while recovering from a broken hip.

Jean was born on a beautiful spring day, April 23, 1925, in Massillon, Ohio. She was the daughter of the late Helen Ringlab and Ralph Beechy.

Jean graduated from Nursing School in Massillon and took a nursing position in New York City.

There she met the love of her life, Michael Leamy. They were married in December 30, 1950; their marriage, sadly, was short. Michael died January 7, 1961; they had 3 daughters: Michaeleen, Moira, and Cathleen.

After Michael's death, Jean moved her family to Fremont, Ohio. After her girls graduated, Jean decided it was time for her to see the world. In 1973, she accepted a nursing job with Indian Health Services and moved to Winslow, Arizona. Over the next 10+ years, she enjoyed working with the Navajo, Hopi and Shoshone tribes, learning their culture, religion, and foods. These years she worked in the southwest gave her a lifetime love of the Native American culture.

Jean furthered her world travels by accepting a job with Aramco Oil Co. in Saudi Arabia. While in Ras Tanura, she met many other traveling medical people with whom she became lifelong friends while traveling all over the Middle East and Europe.

After her retirement, Jean volunteered with Hospice in Fremont, Ohio prior to her move to Boise, ID in 2001. While in Idaho, she enjoyed her grandkids and great grandkids as well as being an active member of Sacred Heart Church. She was always happy to volunteer for anything that was needed. Her favorite volunteer organizations were St. Vincent de Paul and Jesse Tree of Idaho.

During her long life, her love for family was immeasurable. Along with helping people and traveling, she also enjoyed planning and attending family events, cooking, gardening, and playing games. She was blessed with a life filled with love, faith, trust, and travel.

Mom will be forever remembered as a loving and supportive mother, grandmother, great grandmother and cherished friend. She was preceded in death by her daughter, Moira, husband Michael, and her parents, Helen and Walter Huberty. Her spirit lives on in her many friends and surviving family, Michaeleen (Richard) Rogers of Fremont, Ohio and Cathleen Leamy of Boise, Idaho, grandchildren Jaime (Michelle) Liwo, Allyn (Tanya) Spanfellner, Carrie (Chris) Meza,

Ryan Thielges. Along with 4 great grandchildren.

A mass will be held at Sacred Heart Church in Boise at a later date when we can socially gather.

A notice will be placed in the Idaho Statesman prior to the service.