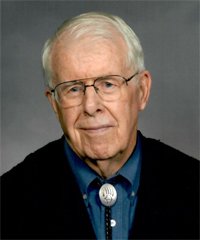 James W. (Jim) Young, Ed.D. passed into the presence of the Lord on January 15, 2021 in Chippewa Falls, Wisconsin just short of his 93rd birthday. He was born February 2, 1928, to William L. Young and Marguerite Nuesse Young in Indianapolis. He grew up in several small Wisconsin towns as his father pastored several churches. He lived briefly in New Jersey when his father enlisted as an Army chaplain in 1942.

When his parents ministered at New Auburn Evangelical United Brethren Church, Jim attended New Auburn High School, graduating in 1946. He served in the Army in Korea between 1946 and 1948 as a clerk. After returning, he met Virginia Coldren, in Santa Cruz, NM, who was a nurse at an EspaÃ±ola hospital. They married in 1950 and he earned his MS in Industrial Education at the University of Wisconsin Stout, in Menomonie. He taught high school in Allen Park, MI then after moving to Eau Claire, he was a chief draftsman at Paul, Hallbeck, and Anderson where he was part of the North High School project. He and his family moved to Ft. Collins, CO where he taught Industrial Construction Management at Colorado State University from 1962 - 1975, as an Associate Professor. Along with several faculty from CSU and other schools, he helped organize the Associated Schools of Construction. The CSU ICM program became one of the best in the country. He also taught construction management at the U. of Southern Mississippi and directed the department from 1975-1981. During his time there he completed his Ed.D. initiated several years before at U. of Northern Colorado. His work contributed to the setting of standards for construction management schools in the U.S. Earlier international experiences in construction training programs gave him interest in a position in technical training in Saudi Arabia with Aramco, from 1981 - 1986. In 1986 he returned to the Construction Management program at CSU, retiring in 1992. His gifts and talents are well displayed in so many accomplishments in the world of construction management education.

Jim and Virginia bought land at Long Lake near New Auburn to be close to many longtime friends from high school days, and built a house which he designed. They attended New Auburn United Methodist Church, where Jim served the church he knew since high school in several ways, as an expression of his faith, including several woodworking projects to beautify the church. They volunteered at the high school, he served on the Citizens Telephone Cooperative as board member and president, and he was a part of the New Auburn American Legion #267. All of these activities displayed a generous heart, ready to help. Jim loved hunting, fishing, and camping. So many cherished family memories revolve around camping and fishing in the Rocky Mountains, and summer visits to Wisconsin and Michigan. He also loved his wood shop, where he created many projects for family and friends, and for the New Auburn High School, including several flag cases. From boyhood he was also an avid model airplane builder. He loved to create, and he loved to have his family visit and take grandchildren fishing.

He was preceded and greeted in death by Virginia, his wife of 70 years, his parents, and his siblings, Betty Rothenberger (Young); Virginia Hilton (Young); John Young; son in law, Don Hatten; granddaughter, DeAnna; great-granddaughter Hope.

A celebration of Jim and Virginia's life is will take place at a later date. Olson Funeral Home in Bloomer is assisting the family.