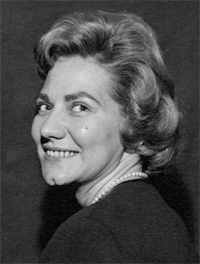 Jacqueline Gambill Hearn entered into eternal rest on May 26, 2022. She was born October 13, 1930 in a small mining community in Eastern Kentucky to Millard and Dixie Gambill. Born the fifth of nine children, the family moved to Louisville when she was a young girl. Jackie excelled in academics, received a full scholarship to Urseline College, and graduated with her Bachelor of Science in Chemistry in 1953. Jackie worked as a medical technologist in Louisville and then took a job at ARAMCO and met the love of her life Bob Hearn, a USAF fighter pilot in Saudi Arabia in 1961. They were married in England where daughter Amy was born. In 1964, they were assigned to Luke AFB and decided to make Phoenix their permanent home when Bob retired in 1970.

After retiring from County Hospital in 1991, Jackie stayed active with many activities including Phoenix Art Museum docents, Christ Church of the Ascension Altar Guild, the theatre, and volunteering at various organizations. She loved and doted on her family, treasured her many friendships, adventurously explored the world, gave generously of her time, and had a way of making others feel valued and special. She has touched many hearts and will be greatly missed.