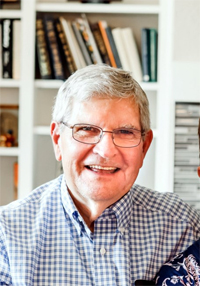 Frederick William Goff passed away on November 5, 2022, in Austin, Texas embraced by the family he so generously loved to the very end. Anchored in his faith, Fred was devoted to his family, generously served his community for decades, and gave much to this world as a gifted engineer and leader. While his was a life of many accomplishments, Fred’s genuine humility usually meant he was focused on serving the needs of others. He made it known that the greatest blessing in his life was the large tight-knit family that brought him so much joy including Martha, his wife of 62 years, his four children, 14 grandchildren, and 20 great-grandchildren. Whether he was family to you, a friend, or a colleague, to know Fred was to feel his warmth and respect for his character.

Fred was born June 22nd, 1940, in Houston, Texas to William Homer Goff and Mary Jane Merrell. After that marriage ended, Mary Jane and Fred were introduced to The Church of Jesus Christ of Latter-day Saints, the faith that so thoroughly influenced the rest of their lives. It was at church that Mary Jane met and then married Dr. Wayne Viehweg, giving Fred a stepfather who helped raise him and his three siblings in Houston. Fred attended Austin High School excelling in the band as a trumpet player. Always disciplined and organized, Fred prepared for a career in engineering in high school by working at his father’s manufacturing business and later as a draftsman in downtown Houston. It was in the summer before his senior year that he met Martha Kay McArthur, the woman who would be his wife and eternal companion.

Fred attended Rice University earning a degree in Mechanical Engineering. While at Rice he continued playing his trumpet in the Rice Marching Owl Band, serving as the president of the band as a senior. While at Rice, Fred and Martha married in 1960 in the Salt Lake City Temple, beginning a life together that would take them and their growing family across the country and the world.

After finishing his undergraduate studies, Fred earned an MBA at Purdue University in Indiana. Upon completing the master's, it was back to Houston where Fred began his engineering career working for oil companies. His early career took the family from Houston to Los Angeles, back to Houston, and to Tulsa, Oklahoma. In 1973, Fred and Martha made the life-altering decision to accept a job with the Arabian American Oil Company in Dhahran, Saudi Arabia. Now with four children, Fred and Martha moved 8,000 miles away to this exotic land with expectations of staying a few years. However, his career and family thrived in this unique setting and Saudi Arabia became their home for the next 27 years.

As an engineer and later in leadership roles, Fred’s work in Saudi Arabia was fulfilling as he participated in building and servicing critical petroleum infrastructure projects that still supply so much of the world’s energy today. He learned to work alongside his Saudi colleagues developing mutual respect professionally and culturally. Fred’s contribution extended beyond the office. He gave of his time and skills generously to benefit the community of ex-pats in Dhahran, including serving ten years on the school board and establishing the AAU Junior Olympics in Saudi Arabia. When Iraq invaded Kuwait and the Gulf War broke out, Fred and Martha made additional sacrifices. They felt compelled to stay in Saudi Arabia despite the very real dangers of war. Throughout this period, they hosted many soldiers in their home, eventually earning recognition from the US Army for their support.

Fred also contributed to his church community overseas. He had the unique opportunity to help establish a foundation for the LDS congregations across the middle east. He served as the Branch President in Dharan, Saudi Arabia, and later traveled to multiple countries as a member of the High Council in the Arabian Peninsula Stake. Fred adamantly respected the limits the Muslim host nations placed on Christian worship, but there were times that he was caught in the cultural conflict—even facing the possibility of deportation. His respect among local leadership was instrumental in building durable trust.

Over the years, Fred and Martha made Austin their US home base and retired to Bee Caves in 1999. Fred was not done serving, and quickly found a way to give to his new community. Within a few years, he was elected to the Lake Travis ISD School Board where he served for 12 years in a time of tremendous growth. He also served on local MUD and HOA boards. In addition, he continued serving his faith community, working as a temple ordinance worker in the San Antonio Temple. In his role as Grandad, Fred opened his home hosting hundreds of family gatherings, boating on Lake Travis, cooking legendary burgers, and serving notorious portions of Blue Bell Ice Cream.

The fruits of his life of service and faith are abundant. As he is welcomed into the arms of our Savior, his family honors Fred’s life for all that he has given us and for all his selfless sacrifice.

Visitation and services will be held at 10AM on Saturday, November 12 at the Church of Jesus Christ of Latter-day Saints at 12001 Bee Caves Road, Bee Cave, Texas. Graveside services will follow at Cook Walden/Forest Oaks Funeral Home and Memorial Park at 6300 West William Cannon Drive.