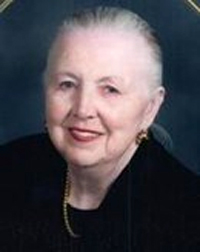 Eva Alice "Eve" Ingram, 94, of Victoria, Texas, passed away on June 19, 2019. She was born in Dorchester, Massachusetts, on October 22, 1924, and was the youngest of three children and only daughter born to George Henry Carroll and Eva Olivia Vincent Carroll.

During World War II, Eve supported the war effort as a welder at Raytheon Corporation. At the end of the war, she met a young Navy lieutenant, Raymond McLean Ingram, whom she married in Waltham, Massachusetts, on March 24, 1946. They had two children, Barbara and Jim.

She and her husband, who worked for Carter Oil Company, Creole Petroleum Corporation, ExxonMobil, and Aramco, lived many places around the world, including Texas, Oklahoma, Venezuela, New York, Connecticut, Saudi Arabia, and Australia before retiring in Houston. After the death of her beloved husband, Eve moved to live near family in Lakeway, Texas, and later to Victoria, Texas.

She was a beloved wife, mother, grandmother, and great-grandmother. Eve cherished her friends, loved all animals, took great pleasure in ice skating, old movies, theater, dancing, shopping, and travel. Most of all, she delighted in her "little family" as she lovingly referred to them.

All who met her were instantly drawn to the radiant joy and overwhelming kindness and gentleness which she exuded. She was a member of Holy Family Catholic Church in Victoria.

Eve was preceded in death by her parents, her husband Ray Ingram, their son James David Ingram, her brother Robert E. Carroll, and her sister-in-law Savilla Capriotti Carroll.

The family would like to extend deep gratitude to Elva, Denise Whipple, Lina Balderas, the caregivers of Caring Senior Services, and the staff of Hospice of South Texas for their love and care. Also, they wish to thank Holy Family Catholic Church's Father Gabriel Bentil for his visits and blessings and dedicated parishioners for bringing Holy Communion to Eve each week.

Interment will be 2:00 pm on Monday, June 24 at Forest Park Westheimer Funeral Home and Cemetery in Houston, TX. A memorial service will take place at 2:00 pm on Saturday, July 13 at Rosewood Funeral Home in Victoria, TX. Immediately following the service, the family invites all to remain at Rosewood to share memories in celebration of Eve.

In lieu of flowers, memorials may be made to Holy Family Catholic Church, 704 Mallette Dr., Victoria, TX 77904.