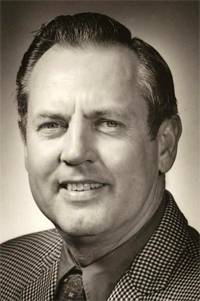 Earl Aubrey Holly passed away peacefully at the age of 93 in the early hours of Sunday, March 31, 2019 in Tulsa, OK. He was born in a Harmon County, OK farmhouse on January 29, 1926, the second of five children of Edd Terrell (E.T.) and Ruby Battles Holly. His first birth certificate listed his maternal aunt as his mother and had to be sent back for correction. "Well, I knew it was one of the Battles girls," responded the old doc who had been called out on a cold, January night.

Earl trudged the proverbial five miles to Arnett School as a child, later driving the school bus as a teenager. He had to balance school with hard farm work on the family's 160 acres of land. On Saturday nights, he was allowed to borrow the family Ford to drive into town (Hollis) to go to the movies and hang out with his buddies, who knew him as "Jiggs" and "Hoss". His love and deeply rooted connection to his Harmon County life remained steadfast, which he joyfully shared through rich, funny stories, and later with his wife and children on summer vacations at "the farm".

In June 1944, immediately after graduating from high school, Earl entered the U.S. Navy during WWII, serving on the U.S.S. Lake Champlain. Two years later after discharge, he went to college, graduating from Southwestern Oklahoma State University in 1950 with a B.S. in Business Administration. After one year as a high school principal in Granite, OK, Earl transitioned to teaching jet aircraft systems at Sheppard and Amarillo Air Force Bases, launching his 25-year career in the aeronautical industry where he lead testing, overhaul and repair, and installation of missile systems and components, most notably, the AGM-28A "Hound Dog" missile. A naturally gifted savant in engines and mechanics, Earl also found a talent in project control and scheduling, where he stayed in high demand managing contracts and high-profile projects in defense, biotech and petroleum industries, including a seven-year stint in Dhahran, Saudi Arabia (1978-1985) while working for Saudi Aramco, an opportunity that afforded him and his family to travel the world.

Earl met the love of his life and future spouse, Nancy Thatcher, in Amarillo, TX at a Christmas party hosted by his sister in December, 1963. After a mostly long-distance courtship in which he wooed Nancy with love letters and expensive steak dinners, they married on August 29, 1964 in Tulsa. They enjoyed a nearly 55-year marriage, staying forever devoted in their love for each other.

Earl was known for his quick wit, love of story-telling, the twinkle in his eyes when he said something funny, fascination with road maps and optimal driving routes, mad domino and bridge playing skills ("one peek is worth two finesses"), and his innate ability to look at anything mechanical and understand how it works. He could fix almost anything, a talent greatly appreciated by his less mechanically-inclined family members. He loved all kinds of music, often singing or whistling many of his favorite tunes. A gentleman with the highest of integrity, he was honest, conscientious, and never left a project half done. He always looked out for his family, whether by quietly paying for a tank of gas or performing a car or home repair, resolving a dispute with a seemingly implacable third party, bargaining for a better price, or just being there during a difficult time. Above all else, he loved his family.

A life celebration and service will be held on Friday, April 12, 2019, 10 a.m., at St. Patrick's Episcopal Church, in Broken Arrow, OK. In lieu of flowers, the family requests that donations be made to Honor Flight Network or a charity of your choice.