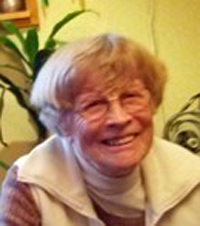 Dorothy Scott died peacefully in her Petaluma home surrounded by family on July 7, 2019. She was 93.

Born September 28, 1925 in Martinsburg, Nebraska to Walter and Grace Schultz; she was one of three children and was raised in this farm community. Her nickname was "Tommy" because she was athletic and active. Her baseball and tumbling skills were legendary. She graduated from high school in Allen, Nebraska. Soon after, during World War II, Dorothy migrated to Chicago to work at Aramco as a typist. She was one of the first employees in what is now an international conglomerate. During the war, she also worked at Western Union.

Dorothy and her Chicago roommates moved to San Francisco where she met her future husband Donald Scott Jr. They were married in 1946. She supported Donald as a typist while he earned his engineering degree at UC Berkeley. They moved around a lot with their growing family, while Donald oversaw construction of freeway overpasses and bridges throughout the Bay Area for the state of California.

As the family grew to five children they put down roots in Petaluma in 1953. Donald became City Engineer of Petaluma. Dorothy joined the Republican Women's Organization of Petaluma and was involved in many local campaigns. At the same time, Dorothy was a dedicated mother whose children spanned from elementary school through college all at the same time.

As her brood grew independent Dorothy became a global traveler. With her sister Jackie, she traveled to far corners of the US and Europe. With her friend Mayor Patty Hilligoss she traveled to mayoral conferences in the US and Canada. She also remained active taking walks around town and three-times-a-week circuit training at Curves - well into her 90's.

Dorothy is best known as a devoted and loyal friend and mother, and as a "second mom" to countless others. She is survived by her sons and daughters: Donald Scott III of Inglewood, Elizabeth Scott of Phoenix, Thomas Scott of Petaluma, Roy Scott of Petaluma, and Laura Scott of Corte Madera. She is also survived by grandchildren Jaime Brandeburg, Amanda Scott, Roy Scott Jr, Robert Schwartz, Helen Schwartz, and Slade Scott; as well as great-grandsons Scott Brandeburg and Tyler Steen-Larsen.