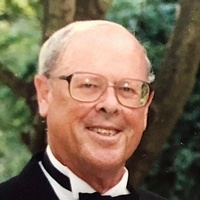 Donald Edward Marquardt, better known as "Don," passed away peacefully on September 16, 2018, at the age of 96.

Born in 1922 in Aberdeen, South Dakota, to Arthur and Ethel Marquardt, Don spent his childhood in Watertown, Wisconsin. Active in the Boy Scouts, he achieved the rank of Eagle Scout before graduating from Watertown High School in 1940.

Don was studying international economics at the University of Wisconsin, Madison, when World War II broke out. He enlisted with the US Army Air Corps – following in the footsteps of his father, a U.S. Army veteran who had served during World War I. After completing his air traffic control training, he was assigned to an air base in Blythe, Calif., for three years.

Following the war, he attended Harvard Law School. Upon graduation in 1948, he was offered a job with the Arabian American Oil Company (Aramco). This led to further study at the University of the Sorbonne in Paris, where he learned Arabic; and at Brasenose College, Oxford University, for an LLB degree in Islamic Law.

As luck would have it, it was in a mosque in Paris that Don met his future wife, Mary Eleanor Lindsay-Rea – who was herself studying at St. Anne’s College, Oxford. He and Mary were married on March 1, 1952, at All Souls Church in Marylebone, London.

Don and Mary then embarked on a 20-year tour of the Middle East – Saudi Arabia, Lebanon and Libya – punctuated by stays in Irvington, New York, and London, UK. It was during this time that they had their five children. In 1972 the family moved to Wilton, Connecticut, from where Don commuted to Mobil’s head office in Manhattan, ultimately becoming assistant general counsel.

Following his retirement, Don volunteered in a variety of organizations including the International Executive Service Corps (IESC), often traveling with Mary for site visits to Poland, Tunisia, Egypt and elsewhere. He was also a president of the Wilton Kiwanis Club; a 30-year member of Wilton Presbyterian Church, as both an elder and a deacon (as well as singing bass in the choir); a president of the Saugatuck Valley Audubon Society; a member of the Wilton Riding Club and Silvermine Golf Club; and a devoted grandfather. A singular achievement of his post-retirement life was working to get Wilton Commons, an affordable community in Wilton, established then built in 2006.

Moving to the Meadow Ridge Retirement Community in Redding, Connecticut in 2007, Don, always an avid gardener and organizer, was active in the beautification, concert and scholarship committees, and also continued his lifelong passion for bridge.

Don is survived by Mary, his wife of 66 years, as well as well as his five children -- Donald Jr. (married to Kathy), Robert (married to Melissa), Linda, Sandra (married to Hans) and Christopher -- and nine grandchildren.

A celebration of Don’s life will be held at 11:30 a.m. on Sunday, October 14, 2018, at the Wilton Presbyterian Church (48 New Canaan Rd, Wilton, CT) followed by a private interment service.