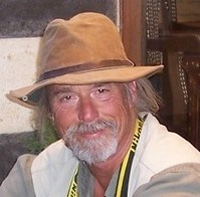 David Werner Tschanz, age 67 of Venice, FL, beloved partner of Julie McMahon passed peacefully on Sunday, August 23, 2020 surrounded by family. Born in Bridgeport, CT he was the son of the late Alfred and Frances Konecny Tschanz. Dave grew up in Stratford, CT where he graduated from Fairfield College Preparatory School in 1970. From there he studied at Saint Louis University, attaining a Bachelor's in Political Science. He later attained Master's Degrees in both History and Public Health from the University of Bridgeport and the University of South Carolina respectively, as well as a Doctorate in Archaeology from the University of Leicester. Dave worked as an infectious disease epidemiologist in South Carolina and Arizona, where he was chief of infectious disease epidemiology. In 1989 he moved with his family to Saudi Arabia to become chief of field epidemiology for Saudi Aramco. Dave worked in Saudi Arabia for over 20 years, retiring in 2012 as the Communications Officer for the Senior Vice President of Saudi Aramco Medical Services Organization. In his spare time, he would also take on the roles of web developer, lecturer, historian, freelance writer, and editor for whatever civic group needed them.

Dave enjoyed traveling and seeing the world he had learned about as a youth. In 2012 he moved to Venice, FL where he enjoyed his retirement until his passing.

An avid writer, David W. Tschanz has been a contributor to Command Magazine, Strategy & Tactics and Strategy Page.com, Against the Odds and Wild West among others for more than three decades. He has written over 1100 published articles and nine books on a variety of topics ranging from military history to designing Exchange Server infrastructure. He edited and published Cry "Havoc!" the journal of Mensa's Military History Special Interest Group. Dave won several awards for his writing both at the local and state level, as well as being internationally recognized.

His family remembers him as a loving and caring individual who always pushed for his children to excel academically as well as in any areas of interest. Enjoying many years of travel with his family, he left an indelible mark on their lives and a deep seeded appreciation for the unique cultures and countries throughout the world. He is survived by his two sons Karl and his wife Qian Liang Tschanz of Hampstead, MD, and Eric Tschanz of Gyeongnam, South Korea; two granddaughters, Jacqueline & Jocelyn Tschanz of Hampstead, MD, and a sister; Kathyann Tschanz Raiano and her husband William of Stratford, CT.

Friends and family are invited to attend his chapel visitation at Farley Funeral Home at 265 Nokomis Ave S, Venice, FL 34285 on Saturday, August 29th, 2020 from 2-5 pm. Please call ahead to schedule a 30 minute visitation time due to COVID-19 restrictions.

In lieu of flowers, the family requests donations be made to the Florida Lighthouse Association PO Box 1676, St Petersburg, FL 33731 in respectful memory of David.