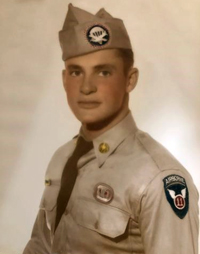 Dave was born and raised in Edwardsville, Illinois. He lived most of his adult life in Granite City and Glen Carbon. He was a general sports enthusiast and all-around athlete. Dave played various sports at Edwardsville High School, and later represented the Army in football, basketball and baseball during his military service. He served in the Army in the JAG office in Europe and later became a paratrooper.

He was employed as fire chief at the Dow Chemical Company in Madison, and then from 1965 to 1969 he worked as the Fire Chief to the ARAMCO owned oil refinery in Ras Tanura, Saudi Arabia. Dave then was employed and retired from The Hartford Insurance Company in St. Louis, MO, where he was a Safety Professional and Loss Control Consultant.

Together with his wife, Stella, Dave traveled extensively to dozens of countries all over the world, and visited most of the 50 states. After retirement, they spent many winters in Leesburg, Florida.

Dave was an avid dog lover. He also had a great sense of humor, he loved helping others, and he was generous with his time and money.

Dave was a devoted husband, father, relative and friend. He will be sorely missed.

A private celebration of life will be held at a later date.