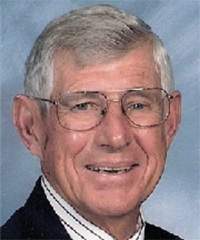 Darwin Otto Hemer, 90, passed away peacefully with his wife, Joan, at his side on 4/14/2020. Darwin was born on 3/18/1930 in New York City. He graduated from Styvesant High School and went to New York University as a pre-med student. After graduating he went into the Army and served as a Lieutenant for two years. After the service, he returned to NYU to get a PHD in geology and chemistry and worked in the micro-paleontology department at the Museum of Natural History in NY City. During this time, he also met the love of his life, Joan. While working at the museum he was offered a job as a micro-paleontologist with ARAMCO Oil in Saudi Arabia.

In 1958 Win moved to Saudi Arabia, but came back the next year to marry Joan. They lived in Saudi Arabia until 1970 where both of their daughters, Janine and Kirsten were born.

In 1970, Win moved the family to Princeton, NJ to begin a long career with Mobil Oil. They lived there for 12 years and then was transferred to Dallas where he worked as an adviser to Middle Eastern Exploration until he retired in 1992.

Win loved to travel for work and pleasure. Many of his trips with Mobil included Afghanistan, Pakistan, Iran, India, Dubai, Abu Dhabi, Iraq and Yemen. Win loved to play tennis and had a dry sense of humor. He loved his family and was proud of his children.

A small family service will be held when gatherings are recommended. Donations in lieu of flowers can be made to Literacy Achieves of Dallas or charity of your choice.