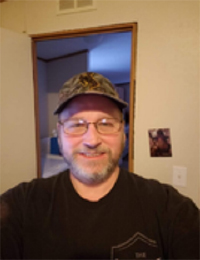 He died unexpectedly on April 17th, 2022 in Evanston, Wyoming.

Dantin was a loving son, brother, father, uncle, and friend. He enjoyed working on computers, cooking, camping, and playing games with his friends.

He proudly served in the National Guard for 8 years, and worked in the Mental Health field at MRSI for more than 10 years.

He is survived by his mother Sheila Hart, his children Nikishia, Shandril, and Sean Hart. His brothers Damon (Melissa), his twin brother Dustin, and Devin (Laura) Hart, his sister Merissa (Esgar) Ursino, along with many nieces, nephews, and friends all over.

He is preceded in death by his father, David Hart.

We will be holding a funeral service for him on Friday, April 22, 2022 at Saint Mary Magdalen’s

Catholic Church in Evanston, WY, at 11am to celebrate his life.

We love and miss him very much.