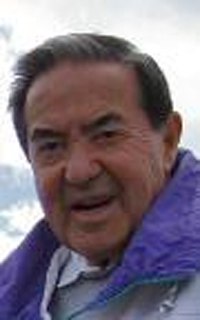 Cruz Carlos Castillo, 97, died November 25, in Sun City, Arizona. A native of Socorro, NM, he served in the Pacific theater with the US Navy during World War II. Following the war, he completed his education, earning degrees from the University of New Mexico, Columbia University (NY) and the Universidad de Madrid (Spain). He worked for several years for the Department of Defense at Air Force bases in England, Germany and Madrid, and then for three years in Saudi Arabia where he was employed with the Arabian American Oil Company (ARAMCO).

After settling in Santa Fe, Dr. Castillo worked for 25 years for the Santa Fe Public Schools and retired in 1986 after a lengthy tenure as principal of Gonzales Elementary School. He was a past president of the NM Elementary School Administrators' Association and served as a member of Governor David Cargo's task force to establish special education programs in New Mexico schools. He moved to Sun City in 1990. He is survived by his wife, Constance, of Sun City, his sons Miguel of Santa Fe, Paul and Estevan of Taos, stepson Ted Jones, 10 grandchildren, 7 great grandchildren. Private services will be held at a later date.