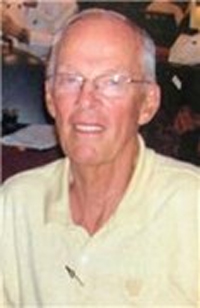 A 1950 graduate of Plymouth High School, he served four years in the United States Navy in Aviation Ordinance in the Philippines during the Korean War. In 1959 he earned a B.A. from DePauw University, where he was a member of the Delta Kappa Epsilon fraternity and served as its president in 1958. He was a self-employed real estate appraiser in Michiana for many years until taking his family to Saudi Arabia where he worked in contracting for the Arabian American Oil Company (Aramco). He returned to real estate for the Department of the Navy in Charleston, S.C. and Naples, Italy as well as for a private firm in Orlando, Fla.

In retirement, he volunteered at Waterman Hospital and was a member of Trinity Evangelical Free Church in Eustis, Fla.

He is survived by his wife of 58 years, Sue (Hughes) Keller and daughters Patricia (Keller) Gordon and Mary (Keller) O'Callaghan. He was blessed with five grandchildren: Mauricio and David Gordon, Julia and Amy Petrolawicz, and Emma O'Callaghan.

A memorial service will be held at his Eustis church and interment will be at New Oak Hill Cemetery in Plymouth.