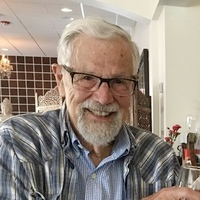 Despite his sarcastic comebacks and cutting remarks that earned him the family nickname “Grumps,” Tony was a strong, loving, and humorous character full of wit and charm, as evidenced by the deep sorrow the family feels at his passing.

He loved bird–watching, and all things animal; donating to many wildlife conservation efforts along with St. Jude Children's Research Hospital and various veteran charities.

Tony was an artisan of sorts, creating beaded wonders, intricate macramés and feather festooned dream catchers. He could build and fix ANYTHING and was often called upon to invent some much-needed gadget for ANYONE. A lover of music, his old Phillips reel-to-reel was never silent. He was an avid Mason, a Worshipful Master of the Grand Lodge of RI, a part of the RI Shriners. He served on the vestry of the local Episcopal Church.

After High School, Tony joined the USAFF as an airplane and engine mechanic and was discharged with the rank of corporal in 1945. He also possessed a courageous and adventurous spirit, leaving his insular home in Newport, RI to work in faraway Saudi Arabia. He and his wife, Barbara Elizabeth Young, his high school sweetheart, raised three daughters there and lived a rich life that included much travel and cultural exposure for 30+ years…The family still enjoys a loving relationship with the peoples and places of the middle east and counts it an extraordinary advantage that he afforded them.

Upon retirement from Saudi Aramco, he relocated back to RI, where his family was overcome with the tragic death of his wife to ALS. Over the years he moved homes from Florida to Charleston, South Carolina, and back to RI. He remarried, divorced, and drew around him a hybrid group of devoted grandchildren. He enjoyed family life with his daughters and grandkids, his hot dogs, “lobstah” rolls, new cars, the ocean and was still driving 93 …..His passing was peaceful after only 2 months of illness; and he went surrounded by his family, with ease.

He is survived by daughters Linda, Susan, and BJ, and grands Marcus, Alexa, Kyla, Aaron and Clayton.

AND he was tall dark and handsome. A true “hunk” in his time.

In lieu of flowers donations may be made in Tony’s name to the Born to be Wild Nature Center, 45 Vars Lane, Bradford R.I. 02808, or online at http://hawkri.org/donate.php

Memorial services will be announced at a future date.