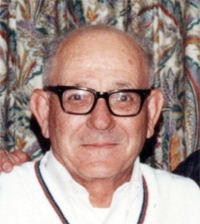 Anacletus (Ned) Renzi, named after the third Pope, was born in Veroli, FR, Italy, the son of Santo and Cristina Renzi, immigrated to the USA in 1927, and lived in Tuckahoe, New York until joining the United States Navy in 1942. He served as SeaBee in the 112th Naval Construction Battalion during World War II in Pearl Harbor, Tinian, and Okinawa. After the war he returned to New York where he worked on Wall Street before attending the College of William and Mary, joining the Sigma Pi fraternity and graduating in 1950.

Ned spent his professional career as an accountant at ARAMCO in Dhahran, Saudi Arabia until he retired to Salinas, California in 1969 where he worked as a realtor. He met a pretty blonde nurse in Saudi Arabia named Ida Gardoni, who he married in 1965.

Ned and Ida enjoyed traveling the world during their retirement years. Ned was a lifelong golfer, proud of his Italian heritage and Catholic faith as an active member of the Sons of Italy, Sacred Heart Parish in Salinas and 4th-degree honorary life member of the Knights of Columbus. He was predeceased by his wife Ida Renzi and his sister Mafalda (Mifi) Hantula. He is survived by his sister Susan Conte of Tamarac, Florida. Burial services were private.