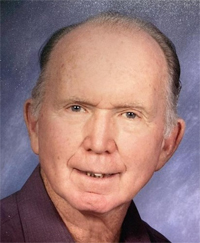 Pasco, Washington - Alan William McNichols was born in Nebraska City, NB on February 17, 1934 to Joseph and Lila McNichols, the fifth child out of seven. He graduated from the University of Washington with a degree in Mechanical Engineering after serving four years in the Navy. He accepted a job with Aramco Oil and worked for 12 years in Saudi Arabia. In 1973 he became a father to twins Kelly and Patrick. Upon returning to the United States he had various positions with his last being on the Hanford site.

In his retirement he loved making various stools, toys and benches for his children, step-grandchildren and friends. He continued to travel with trips to China, Thailand, Costa Rica, Belgium, Amsterdam, Italy and Alaska with his loving wife Arline. He was happiest when he was near the ocean.
Proceeding him in death are his parents, brothers Hugh, Bernard and Dick and his sister Lila. He is survived by his wife Arline, daughter Kelly, son Patrick (Laarnie) and granddaughter Madison. He also leaves stepchildren, Jerry (Lee Ann) Powers and Debbie (Doug) Hughes and their families who he dearly loved.

In lieu of a service there will be a private family gathering at the Oregon coast.