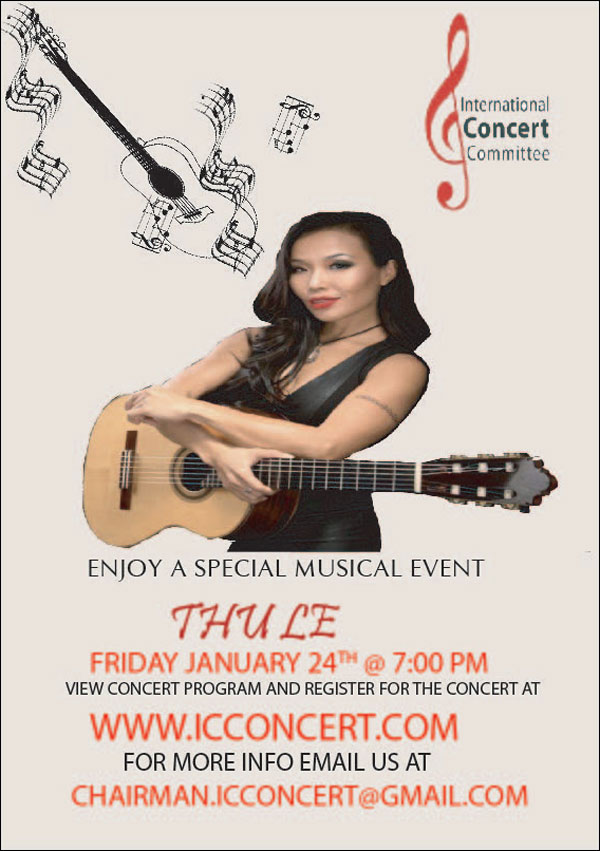 The International Concert Committee is proud to present its first concert of 2020. Thu Le is an International award winning classical guitarist and one of the world’s leading female proponents of her art.

When: January the 24th @ 7:00 pm.
Where: A location map will be sent to you after registering for the concert.

Soft drinks and small snacks are provided during a brief intermission.

Thu Le is an International award winning classical guitarist and one of the world’s leading female proponents of her art. The Hanoi born guitarist is currently living in Bahrain.

She brings to her mesmerizing performances a unique blend of passion, colour and personality which perfectly complements her undoubted musicality and technical prowess.

Thu Le’s love affair with the guitar began at the age of four thanks to her father, Le Hanh. At the age of five she gave her first public performance in Vietnam under his tutorship.

Thereafter, her relationship with her guitar blossomed and her journey continued at a relentless pace. She passed the entrance examination for the National Conservatory of Music, Hanoi at the age of only seven, making her the youngest ever student to be admitted to this prestigious establishment. Her teachers included Nguyen Hai Thoai, Vu Bao Lam, Nguyen Nhu Dung and Nguyen Quoc Vuong.

In 2018 Thu Le was selected to perform and hold master classes at the prestigious Guitar Federation of America convention held in Louisville, USA. Thu le is a jury member, she gives master classes and performances at many international guitar competitions and festivals.

Thu Le is a Savarez artist.

Besides her solo career she also collaborates and performs with orchestras, string quartets, vocalists, violinists and flutists.