‘Udhailiyah Looks to Care for its True Locals: Dhubs

by Maleeha A. Khan 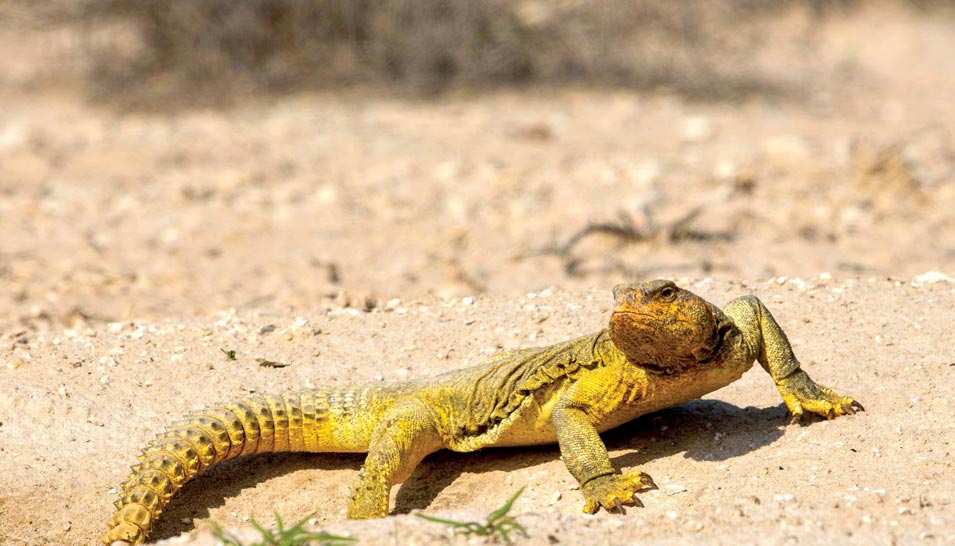 Hunted as food in parts of the Kingdom, dhubs enjoy a protected status in the ‘Udhailiyah community.

In recognition of the dhubs’ important history and prominence in ‘Udhailiyah, company officials have erected “Dhub Crossing” signs as part of an initiative to promote the spiny tailed lizards and their environment. (Photos: Mohammad Al Majed)

‘Udhailiyah — In the early 1970s, hundreds of thousands of gentle desert dhubs of ‘Udhailiyah were blissfully unaware that their stretch of untouched desert was actively being developed into a residential community for Aramco employees and their families.

The Uromastyx maliensis, or more commonly called the spiny tailed lizard, is primarily herbivorous, but occasionally they eat insects and other small animals, especially young lizards. They spend most of their waking hours basking in the sun, hiding in underground chambers at daytime or when danger appears, and tend to establish themselves in hilly, rocky areas with good shelter and accessible vegetation — like in ‘Udhailiyah.

Consumed as food by some peninsular Arabs — mainly those residing in the Kingdom’s interior regions — the desert dhubs in ‘Udhailiyah enjoy freedom from hunting and human consumption, holding a prestigious and protected status in the hearts and minds of those who live and work here.

In celebrating the dhubs’ significant status as the first and true local inhabitants of ‘Udhailiyah, as well as to raise awareness of this species, the ‘Udhailiyah Community Services Division installed six “Dhub Crossing” signs and launched an initiative to help educate ‘Udhailiyah residents to not only respect the dhub population, but to actively participate in their conservation and allow their species to thrive and flourish in their natural habitat.

The signs have been erected in key locations where a number of dhub burrows have been identified and multiple dhub crossings have been observed across pedestrian walkways as well as roadways. The signs advise motorists to proceed with caution in these areas, announcing that dhubs have the right of way throughout ‘Udhailiyah, and these marked areas particularly.

The Southern Area/Central Region Community Services Department diligently works to protect the environment and biodiversity of the company’s communities, including dhubs in ‘Udhailiyah and the Abqaiq Nature Reserve.