Tim Barger died Feb. 15 at his home in Vista, California, leaving a legacy of projects to promote an awareness and understanding of the Middle East that grew out of his own deep roots in the Kingdom.

The son of former Aramco president and CEO Tom Barger and his wife, Kathleen, Tim was born in Dhahran on Sept. 18, 1947 — the seventh child to be delivered at the Aramco hospital on King’s Road. 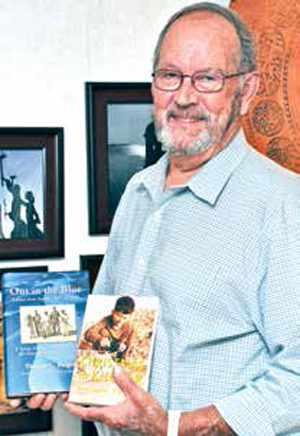 “Tim was unique,” said Steve Furman, who as a 9-year-old met Barger just a couple of days after he was born and remained a close friend for life.

Furman called him a “free spirit,” noting that as a kindergartener, he played hooky for a month. Tim befriended local gardeners and construction workers — freeloading lunches instead of going to school in the building that is now the Recreation Library.

When he was found out, “His mother was livid,” Furman said, and she escorted her son to kindergarten every day after that.

Tim recounted similar tales in Arabian Son, 21 Stories, a book published by his own Selwa Press in 2014. He also included recollections of the Saudi Arabia he saw through more mature eyes after returning from the U.S. in the mid-’70s to take an electronic communications job at King Faisal Specialist Hospital in Riyadh, and later establishing a video electronics company in Jiddah.

His sense of humor and history permeate his stories. Writing about his birthplace in what later became the Women’s Exchange, he said, “You can well imagine how my mother used to daydream about taking me back to the exchange for a Waring blender.”

Tom Lippman, a prizewinning author who was published by Selwa Press, said: “Tim didn’t get into the publishing business because he expected to make a ton of money. He did it because he loved Saudi Arabia, its history, its people and the American experience there, and he wanted his fellow Americans to know about it.” 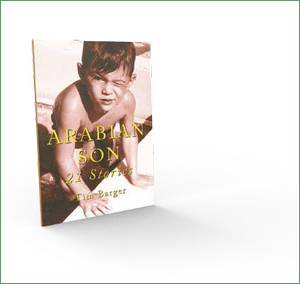 Tim graduated from boarding school in Wisconsin and then attended Santa Clara University in California, where he met his first wife, Janet MacDonald. The couple and their two children, Khamisah (named after Khamis ibn Rimthan, the famous Bedouin guide assigned by the government to assist the first oil prospectors), and Luke (later joined by a brother named Sam) lived in the Kingdom for several years. They returned to California, settling in Vista, where Janet died unexpectedly in 1982.

Tim later married Sydney Fate, the daughter of Aramco executive Don Fate, and they established Selwa Press. Its first book, Out in the Blue: Letters from Arabia 1937-1940, is a compilation of Tom Barger’s letters from the Kingdom to Kathleen, who’d remained in America when he came to Saudi Arabia. It was published in 2000.

giving back to the Kingdom

Tim appreciated the Kingdom’s culture in other ways, too. In 2001, he and his sister, Annie Hebert, were welcomed at the National Museum in Riyadh by HRH Prince Sultan ibn Salman, president of the Saudi Commission for Tourism and National Heritage, when they returned several important artifacts collected and preserved by their father before the country had established a museum infrastructure.

They returned to Riyadh in 2012 with a larger group of donors with company connections who had joined in Saudi Aramco’s Antiquities Homecoming Project.

Tim continued working along those lines into the months and weeks before he died. Late in 2017, he donated to Saudi Aramco his father’s photo archive, dating to the 1930s and including some never-before-published images.

Tim understood the unique position of the Americans who had been fortunate enough to know Saudi Arabia firsthand through Aramco, saying in Dhahran in 2008: “We’re not Saudi-Americans, nor are we American-Saudis; maybe we are Saudi Aramco-Americans.”

He was talking about the children, but he could have meant their parents and single employees, too.

That Saudi Aramco-American status gave him a special responsibility, he felt — one that he furthered by promoting intercultural understanding in word and in deed.

He is survived by his daughter, Khamisah, and her children, Beatrice, Theo, and Jack Lundell; his sons, Luke and Sam; his sisters, Annie Hebert, Mary Barger, Norah Barger, and Teresa Barger; and Tim’s brother, Michael.