The Tapline: A Legacy of Triumph 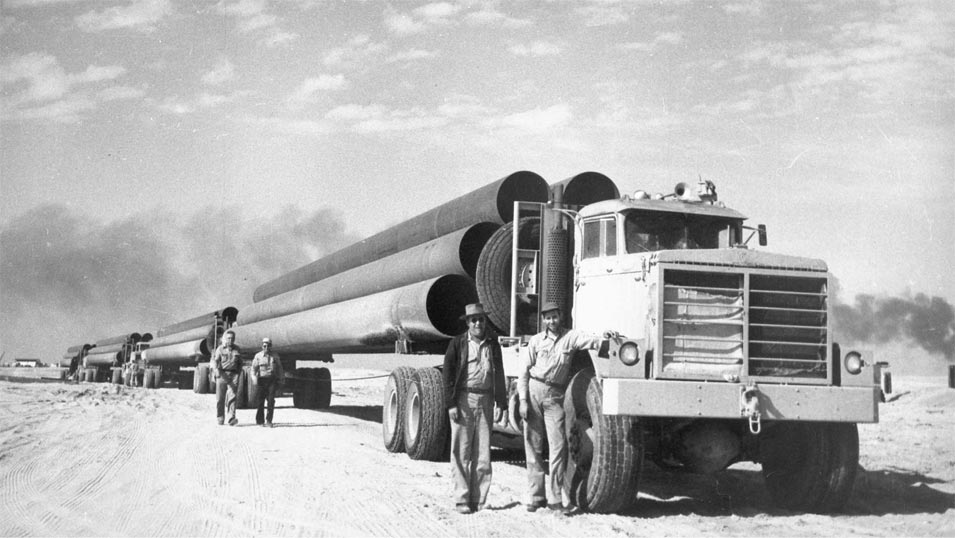 The Trans-Arabian Pipeline—or Tapline—has been officially recognized as Saudi Arabia’s first industrial heritage site. This is the story of how the 70-year-old oil pipeline won its place in history – and in the affections of those who worked on it. 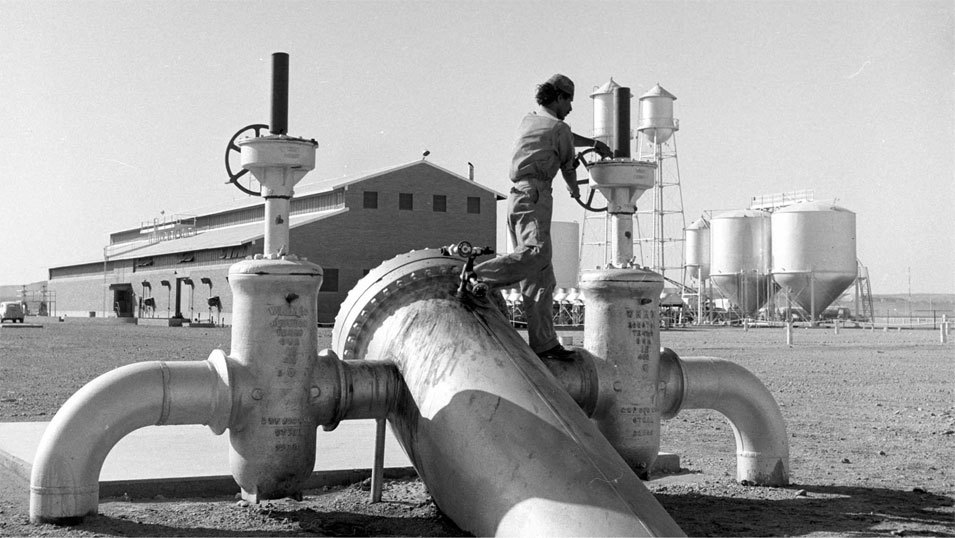 6 original pumping stations were built, five in Saudi Arabia, and one in Jordan, to pump oil along the Tapline.

The Trans-Arabian Pipeline, known as the Tapline, located in the northern Saudi Arabian desert, is considered a historical feat of engineering that brought energy to Europe in the aftermath of the Second World War.

When it began operations in 1950, it was the world’s largest oil pipeline system. It carried billions of barrels of crude oil 1,648 kilometers from Abqaiq on the Arabian Gulf to the Mediterranean port of Sidon in Lebanon, marking a pivotal moment for both the Kingdom and the legacy of Aramco.

But the Tapline was always much more than the sum of its physical parts – measured in tons of steel pipe, or the capacity of its oil. Its success was thanks to the dedication of an adventurous and resourceful team of engineers, mechanics, and technicians, drawn from all over the world.

Now, 31 years after it was decommissioned, it is to become the first officially-recognized industrial heritage site in Saudi Arabia, cementing its place in the history books. 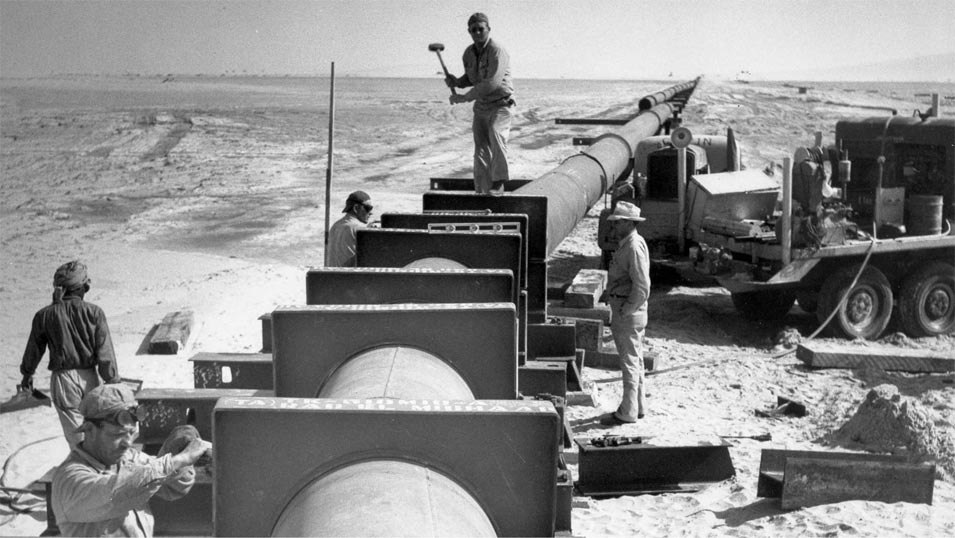 From Blueprint to Reality

As the Second World War approached its final days, it became clear that the reconstruction of Europe would need a steady and cost-effective supply of crude oil. Previously, it was a nine-day, 3,600-mile voyage by ship from Saudi Arabia through the Suez Canal to the Mediterranean; a long and costly journey that would not accommodate the expected surge in crude oil demand.

A new pipeline connecting the oilfields of eastern Saudi Arabia to the Mediterranean Sea would need to be built. 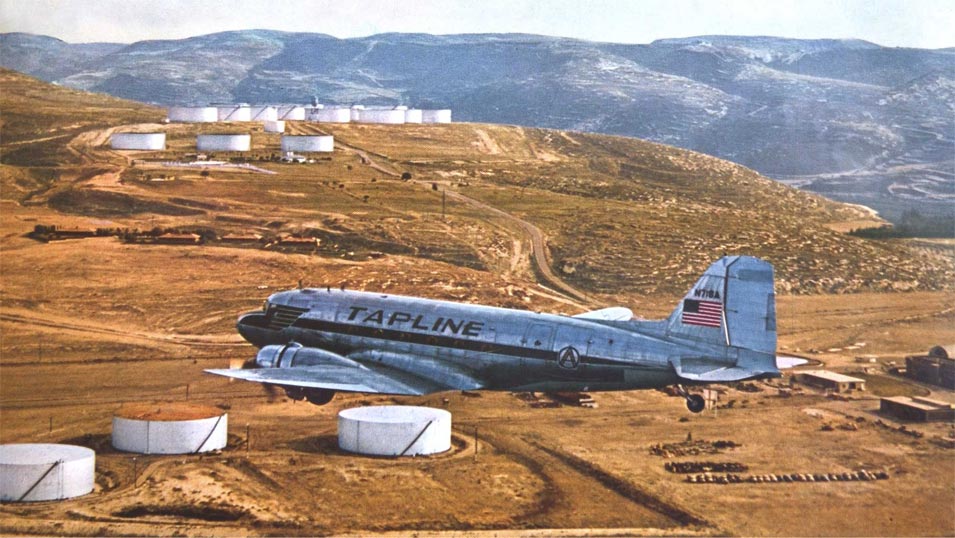 1,648 kilometers was the total length of the Tapline, which required a fleet of aircraft to move personnel and equipment around.

In 1944, Aramco founded the Trans-Arabian Pipeline Company as a joint venture between Aramco and other leading international oil companies, and so began an eighteen-month planning phase. It was to be hugely ambitious. The vast distances involved, the lack of facilities, and the extreme temperature and challenging terrain, meant building the Tapline was one of the biggest strategic decisions the Company would make during this time.

The Tapline would pass through Jordan, Lebanon, Syria and Saudi Arabia, and moved from engineering blueprint to reality when construction began in 1947. 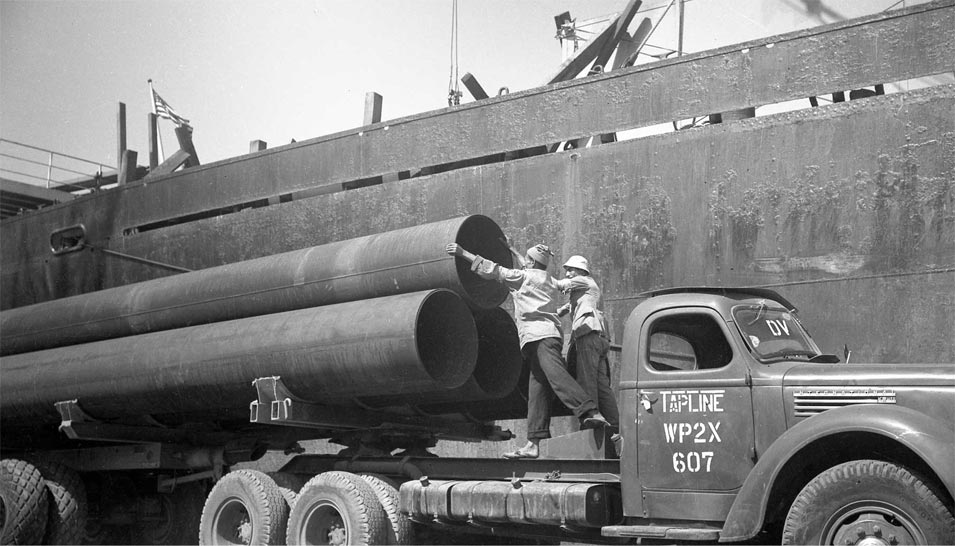 305,000 tons of steel pipes were transported to the Kingdom to build the Tapline.

The logistics of construction was immense. 305,000 tons of steel pipes were transported by ship. Six pumping stations were to be built along the 1,648 kilometer route, which also needed to be paved.

The pumping stations—at Nariya, Qaisumah, Rafha, Badanah, and Turaif in Saudi Arabia, and Qaryatain in Jordan — were designed to push the oil up to the pipeline’s maximum point of elevation, 907 meters above sea level. From there, the oil would flow downhill through northern Jordan, southern Syria and finally to the Lebanese port of Sidon on the Mediterranean coast.

After three years of construction by more than 16,000 workers, the final joint of the Tapline was welded on 25 September 1950. 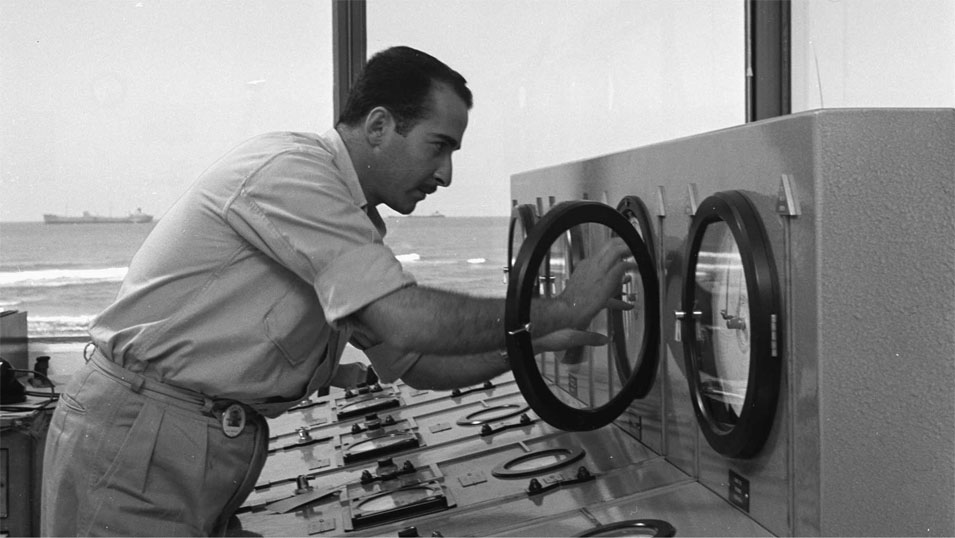 1951 was the year that the Tapline became operational.

The Tapline was a success. In 1950, Aramco produced 200 million barrels of oil. In 1951, the first full year in which the pipeline was operational, Aramco’s production rose to 278 million barrels, and more than one-third of it flowed through the Tapline.

It proved to be a long, steel, artery of energy to the Western markets, both accelerating Aramco’s development and growth during the 1950s, as well as fulfilling global post-war needs by providing a reliable, cost-effective source of crude oil. 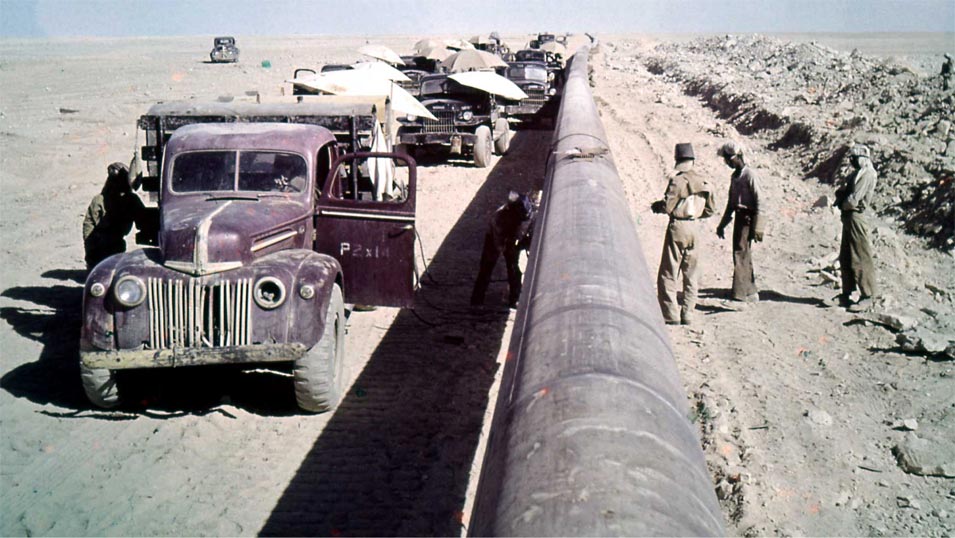 40 new water wells were drilled along the route to support workers.

The Tapline forever changed Saudi Arabia’s northern region, bringing facilities and prosperity along its route. Around the six original pumping stations, new communities sprang up, each with homes, schools and dining halls built for the families of people working on the Tapline. By the mid-1960s, these communities had expanded to include mosques, shops, leisure facilities, theatres, playgrounds—and together had become home to more than 5,000 people.

Although the Tapline has been out of service for decades, the towns they sparked still thrive today – Turaif, which did not exist in 1945, is now a port of entry into Saudi Arabia.

The pipeline also created an investment boom for small businesses and individual entrepreneurs: between 1947 and 1952, Aramco and the Tapline Company paid out more than $46.8 million to more than 10,000 independent contractors, providing new skills and training as part of this work. 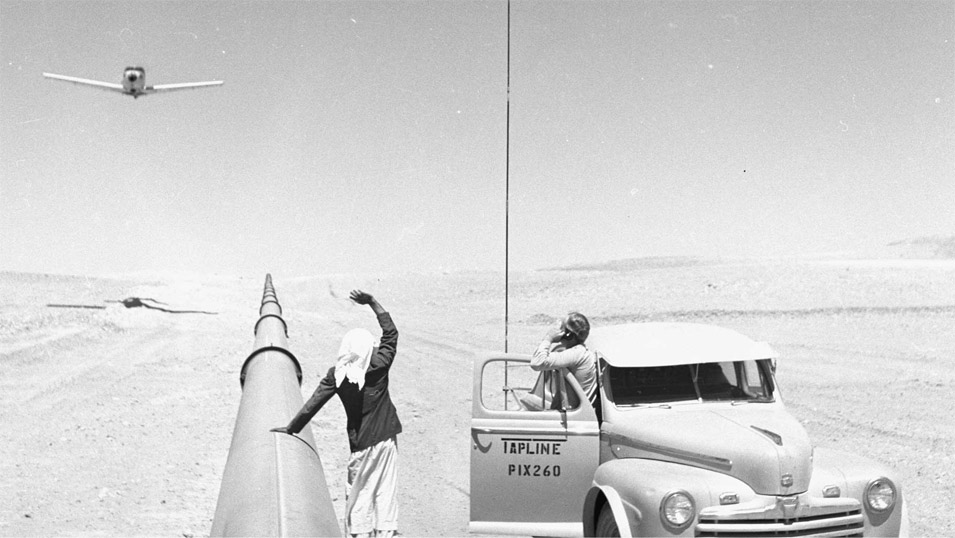 16 days was how long it took for one drop of oil to travel from one end of the Tapline to the other.

The Tapline remained a key component of Aramco’s oil delivery network for more than 40 years until a new generation of larger and more cost-effective supertankers reduced the Tapline’s economic advantages. Pumping was discontinued, but the pipeline continued to transport smaller quantities of oil up until 1990.

With new 500,000-ton supertankers now the preferred method of transporting oil around the world, the Tapline was completely decommissioned and finally ‘de-cruded,’ or cleaned out, in 2001.

Today, the story of the Tapline is known well to those who worked on it or live near it, with fondly shared memories of the challenges and unique experience of working on the then-longest pipeline in the world.

In December 2020, the Kingdom’s Ministry of Culture selected it as Saudi Arabia’s first industrial heritage site, while surveys are underway to propose it as a UNESCO World Heritage Site.

The physical pipeline still runs parallel to the highway in northern Saudi Arabia– aptly named the Tapline Road. In its current, unused state, the sheer size of the Tapline creates challenges for those working to preserve and celebrate it. But although the original main pumping stations have long been dismantled, the pipeline remains a monument to ingenuity, vision, and determination, and one of the milestones of Aramco’s legacy.