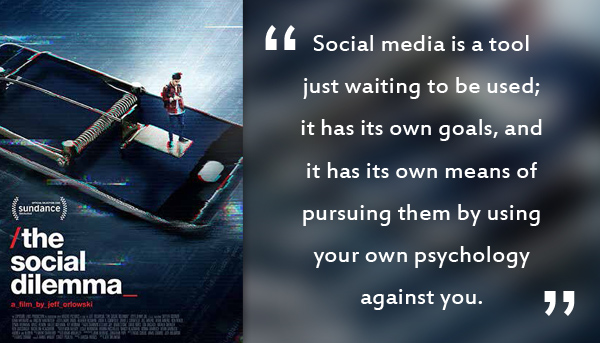 If social media were a book written by Jeff Orlowski, he just might open it in Dickensian fashion: “It was the best of tools, it was the worst of tools.” But make no mistake about it, the director of “/the social dilemma_,” has a message that leads watchers to trend to the latter.

The docudrama, currently showing on “Netflix,” sounds the alarm on social media’s growing impact on virtually all aspects of our lives — politics, family, economics, relationships, and current events. It does this by lining up an impressive cast of software developers talking about how the tools they helped popularize have been co-opted by forces who are far more interested in monetizing our attention than creating a form of healthy social interaction.

Early in the 94 minute production, a key point flashes across the screen: “If you are not paying for the product, you are the product.” And this is perhaps the most salient point of the production — that social media giants make their money by getting its users (a term they note is used primarily for two types of people: those who use software, and those who use illicit drugs) to consume more content on their tool.

While this is not exactly news (its Netflix predecessor “The Great Hack” detailed the Cambridge Analytica scandal and how it manipulated users), “/ the social dilemma_” works hard to bring a human element to the fore.

Rising political polarization, anxiety, depression, suicide rates, and a significant erosion in trust are traced back to tools that are driven by forms of artificial intelligence that are difficult for even the astute to completely recognize and defend themselves against.

Orlowski even steps away from the documentary formula and introduces an ongoing drama inside the film, following the lives of a family that deals with the growing demands of a culture that is plugged in round the clock to social media and digital communications.

At times, it proves difficult to watch, as a sense of foreboding doom seems to spill over into hopelessness in fighting something so significantly entrenched in our everyday life. However, it does offer some glimmers of hope.

One of the people featured most in the film, Tristan Harris, is seen touting a more reasonable route through his work at the “Center for Humane Technology” that he co-founded. Others who are featured call for increased regulation in a variety of ways — laws, taxes, reform — to help solve the problem.

But it’s the questions it raises that provide viewers the real meat, such as: How am I being manipulated by social media? Do I spend too much time on social media? Is that healthy? How does it affect me? And other than deleting my account, how else can that experience be improved?

In the end, the film’s most valuable message may be that the most important thing is to realize there is a problem in the first place, with one expert at one point asking rhetorically, “How do you wake up from the Matrix if you don’t know you’re in the Matrix?”

With “/the social dilemma_,” Orlowski is standing before us like Orpheus and urging us to take the red pill (i.e., to recognize the problem). How that problem is resolved, and how we answer those questions, may very well determine our future, as well as that of our children.