The Seven Natural Wonders of Arabia, Part III: The Edge of the World 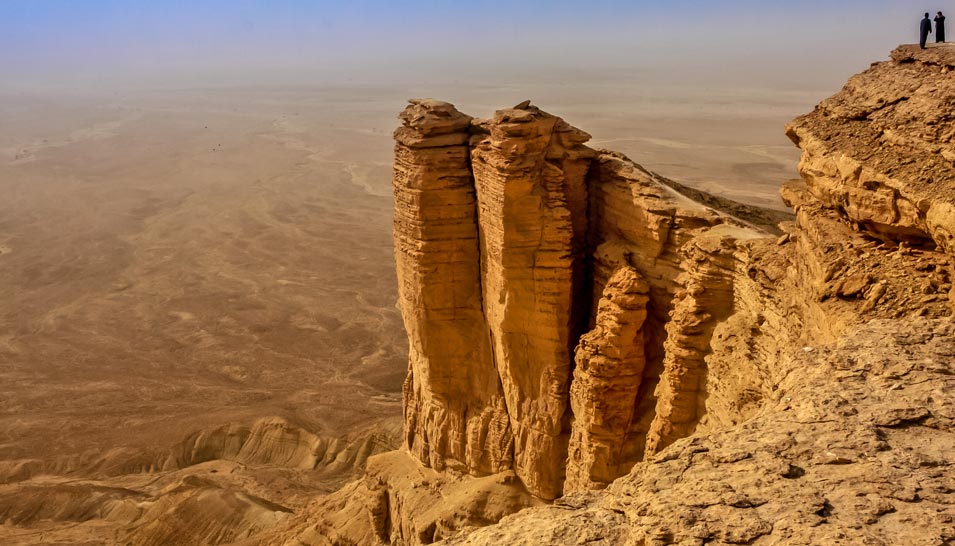 Nature is often in a playful mood when it comes time to determine the shape and character of Mother Earth. Take the example of the Arabian Peninsula, for instance. Few places on earth are as chock full of geologic surprises as the Kingdom. Jabal Fihrayn—popularly known as “the Edge of the World”—located in the desert northwest of Riyadh is ample proof of that. The Edge of the World is the third stop on our tour of the Natural Wonders of Arabia, following earlier stops at Elephant Rock and Jabal Abyad. Standing atop the 1,000-foot high escarpment at Jabal Fihrayn, you find stretching before you an uninterrupted view of the horizon in all directions, leaving you with the impression that you are, indeed, standing at the very edge of the world. The effect on one’s body and mind and soul is exhilarating.

Like many features of Arabian geology, the Edge of the World dates its birth from the dramatic tectonic forces that created the Red Sea to the west. It is part of a much longer geologic feature known as the Tuwaiq Escarpment. Tuwaiq’s cliffs were formed when the Arabian Plate shifted toward the northeast as the Red Sea Rift spread apart beginning in the Eocene Epoch 50 million years ago. Essentially, the same forces that created AXP’s second Natural Wonder of Arabia, Jabal Abayad, created Tuwaiq Escarpment and Jabal Fihrayn.

Several hiking trails offer adventurous souls a chance to explore the site’s wonders on foot. Understand that it takes some hiking to get to the actual Edge. There’s no other way to approach it but by good old-fashioned perambulation—what my father liked to call “riding haunch’s horses.”

There’s a slight cleft in the Tuwaiq Escarpment’s face near the Edge of the World that allows hikers to descend to the plateau 1,000 feet below. From the Edge’s aerie one can clearly identify the courses of dry river beds (wadis) and winding, narrow depressions in the desertscape marking the paths of ancient caravan routes. Use your imagination and you can almost see long strings of camels and donkeys bearing precious spices like pepper and cinnamon and highly-prized aromatics like frankincense and myrrh to Persia and markets in the Levant bordering the Mediterranean Sea.

Access to the Edge by vehicle can be challenging. A paved highway from Riyadh will take you half-way of the 55 or so miles it takes to make it there, at which point the going gets decidedly tougher. You are advised to be driving a desert-ready SUV, ideally one equipped with four-wheel drive and with sufficient clearance to traverse the second half of your journey over difficult terrain and pock-marked dirt roads. Some will tell you that four-wheel drive is optional, but it’s preferable in many people’s minds.

Allow yourself two hours of travel time each way. It’s not necessary to hire a guide or take part in an organized tour, but those are attractive options for visitors preferring to keep things simple and worry-free. Should your vehicle blow a tire somewhere along the way, it will be someone else’s responsibility to fix it, not yours. In any case, a visit to the Edge makes for a perfect day trip from the Kingdom’s bustling capital. A growing number of travel companies offer professionally-hosted group tours.

Be advised if you’re doing the driving yourself to never ever stop in the soft sand. Extricating your vehicle from its grasp without additional help is problematic at best, impossible at worst, and more likely to be the latter than the former. Exercising caution is always sage advice when traveling across the Kingdom’s deserts on back roads to any destination.

If you have the luxury of choosing in which season of the year to visit the Edge, sometime in the fall or winter months offers the best conditions. Temperatures are cooler then, and the skies generally clear. Challenging the scorching-hot temperatures of the Arabian summer in a desertscape offering virtually no shade is ill-advised, especially if your idea is to do so on your own without a professional guide. February, according to many, is an ideal time to visit. If you want to avoid crowds, your best option would be to visit on a weekday. The Edge has become increasingly popular and large influxes of visitors on weekends have been known to produce crowded conditions.

There’s a gate across the one access road into the Edge, and rangers close it at 6:00 p.m. sharp every evening. Make sure to be through the gate and on your way home by then. Otherwise, you and anyone with you will find yourselves spending a long night in the desert on your own—save for the stars above and assorted desert fauna like hyenas and jackals.

The night view of the heavens from deep in the Arabian desert is legendary, but not worth taking unwarranted risks to experience. Let your nighttime star-gazing excursions into the desert be orchestrated by experts who know the territory and challenges. If you’re a former Aramcon, however, and daring as many annuitants typically are (or once were, before maturity took control of their senses), you probably once upon a time organized a midnight trek or two of your own without outside help. But if you’re a desert tenderfoot like most new visitors to the Kingdom likely will be, you’d best leave the organizational details to others, whether for a trip to the Edge or for a star-gazing soirée. “Caution is the better part of valor,” as the old saying goes.

Exercise caution at all times. There are lots of loose rocks, and sudden rock slides are not unheard of. Fences and warning signs are non-existent. You need to be on the lookout for potential dangers at all times. Be alert! Lives have been lost owing to avoidable accidents and inattention to details.

If you are a dedicated outdoors-person who likes to camp, you may want to take along a tent, a sleeping bag, and other camping gear and spend the night sleeping in the great outdoors among the acacia trees growing in nearby Acacia valley. You needn’t bring an air mattress, though. The soft sand found everywhere adjusts to the contours of your body better than any air-filled plastic contrivance ever could.

Visitors sometimes compare Jebel Fihrayn, citing their shared dramatic grandeur. Perhaps you as an annuitant have seen the Edge of the World yourself. If not, you may want to add it to your bucket list of must-dos. And, should a friend ask about visiting Saudi Arabia, you will have no reason to hesitate to recommend a visit to the Edge and other sites in the Kingdom now that tourist visas are readily available on-line.