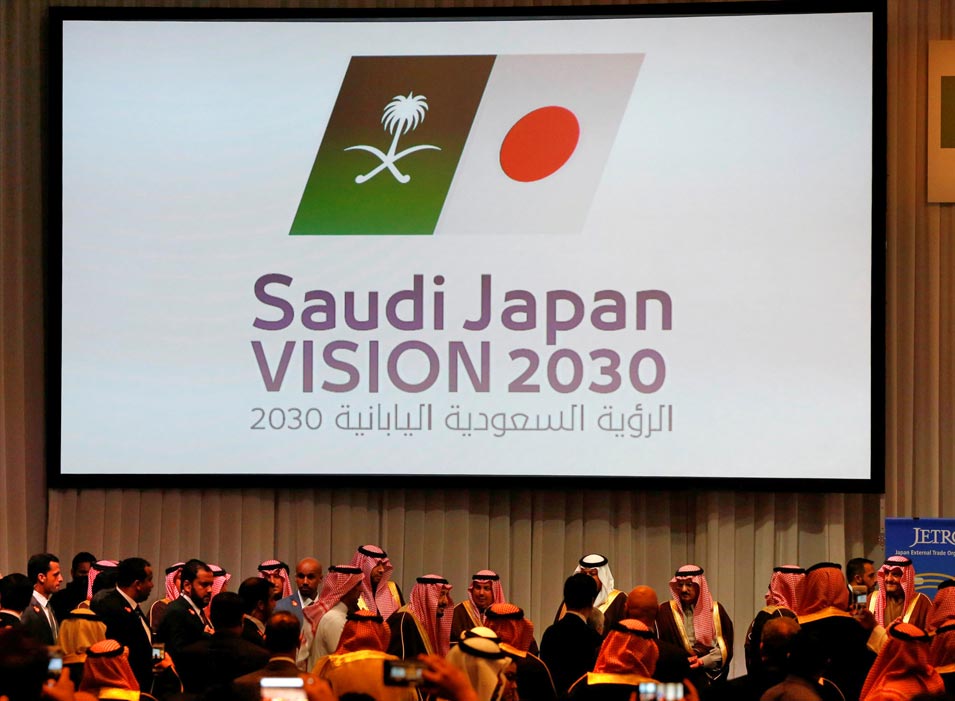 Aramco annuitant and current resident of Japan Eiichi Nakamura was recently featured in these pages. The highlight of that article was his account of a traditional tea ceremony performed at his home in Yokohama for top executives from Saudi Aramco and their key customers in Japan. Here we return to Naka and his professional and life adventures, focusing on his remarks regarding what he called “the merchant spirit.” Lessons in spirit and attitude Naka learned from his father’s example had a major influence on his approach to business and help explain his noteworthy success guiding Aramco’s marketing efforts in the Asian marketplace.

“While watching a baseball game televised from Jingu Stadium,” he told AXP, “I saw an ad by the Itochu Corporation that said, “Be a merchant instead of a corporate guy. Instantly, I recalled an email message I sent to Mr. Toyoshima of Itochu in April 2017.”

Naka had noticed al large front-page ad for Itochu running in that day’s Asahi Newspaper concerned about what he likes to call “the merchant spirit.” The ad read: “We wish to be a merchant instead of a corporate guy” and included comments from several Itochu employees. One such employee said, ‘I would rather go and see my client in person despite the fact that I can easily connect with him via email or phone. Another employee was quoted as saying, “There are ten billion markets if there are ten billion people. Isn’t it very encouraging?” Naka expressed to Mr. Toyoshima admiration for those comments, pointing to them as evidence of the remarkable progress Itochu had made in its approach to business by incorporating this spirit or attitude into its culture. Naka cited a similar example set for him by his father:

“My father was a real merchant through and through to his very core,” he wrote to Mr. Toyoshima. “He ran a large-scale consumer business on the famous Isezaki shopping street in Yokohama City. As such, he didn’t like the idea of me advancing to a university-level education, fearing that, in the end, as a result, I would end up taking a job in one corporation or another, where I would lose contact with the idea of the merchant spirit he so treasured. ”

Naka’s successful career with Aramco is conclusive proof that, lifelong, he succeeded in heeding his father’s example and putting his principles into action in his work. Even so, he demonstrated a distinct spirit of independence by attending a university anyway, despite his father’s expressed wishes. Upon completing his degree, he went to work for a succession of major oil companies—Exxon, Gulf Oil, GSK, and, ultimately, Saudi Aramco—focusing his work primarily in the areas of supply and marketing. At one point in his career, he oversaw corporate planning for a US/Japan joint venture. Throughout his long career, in honor of his father, he kept the merchant spirit he taught him as the central focus of and primary inspiration for his work.

In his email to the Itochu executive, Naka pointed out three central principles of the market spirit, namely a willingness to negotiate; using a client’s wish as the starting point for all negotiations; and implementing a well-thought-out plan that achieved his client's wishes while matching them to current market conditions.

He specifically cited as an example his work for Saudi Aramco. When the company opened an Asia-Pacific regional marketing office in Tokyo in1991, the existing market for Arabian crude was fairly limited—600 KBD in sales to major international oil companies and another 100 KBD in direct contact sales. Those were modest numbers at best, considering that Saudi Aramco’s list of potential customers included all refiners in Japan, Korea, China, along with all refiners from the various countries comprising Southeast Asia. A huge market opportunity was successfully met by Naka and his team based on the principles of the merchant spirit.

Naka described the breadth of the success resulting from their efforts:

“My typical business contacts consisted of four persons at each potential company, ranging from a department head all the way up to the company president. After a 15-year effort by myself and my team, Saudi Aramco’s aggregate sales to Japan, Korea, and Taiwan rose more than three-fold to2, 000 KBD. .... Those sales consisted of five different crudes and one condensate. During those years, Aramco opened a separate marketing office in Beijing to cover China, Singapore, and Southeast Asia.”

Naka and his team met with large-scale success despite the fact that, at the time, Aramco’s pricing in the Asia-Pacific region was at least $2 per barrel higher than the prices it was offering to the US and Europe. Corporate executives in Dhahran were delighted by the results delivered by Naka and his modest Tokyo-based staff: an average of $730 million a year for 10 years, amounting to $7.3 billion for the decade.

The key to their success, according to Naka, was his sales staff learning to handle their various responsibilities in the same “merchant spirit” his father had taught him. “Our people put those principles into action,” he wrote to Mr. Toyoshima, “while carrying out a wide range of critically-important responsibilities.” Those responsibilities included:

“It was essential,” Naka concluded, “that the regional office in Japan maintained close contacts with customers—as well as with Headquarters. That sometimes included karaoke sessions! Those close contacts allowed our office to play a key leadership role in educating and persuading customers to work with and depend on Saudi Aramco, especially in cases where a new customer was being courted. My diverse experience I gained working with Exxon and Gulf Oil helped me a great deal when I joined the Aramco family. The lessons in the merchant spirit I learned from my father were vitally important to our success as well. ”

Naka’s firm commitment to the merchant spirit was not without its challenges. There were times when his customer-focused approach came into conflict with directives from Headquarters in Arabia. Yet, at all times, he remained true to his principles.

“Large doses of the merchant spirit,” he wrote in conclusion, “are required to successfully influence, support, and show respect for customers—always with a firm resolve. ... I hope for Itochu’s further advancement.”

Globally, Saudi Aramco’s management team is made up of dedicated, hard-working, principled professionals. Naka is a perfect example of that fact. AXP is honored and pleased to have this opportunity to share his wisdom with our readers.