Since my gasping, near-death introduction to smoking a hubbly bubbly in Jeddah on my first camping trip in Kingdom in 1989, I had been on a mission to purchase one of these pipes - not to smoke, but for what they represented in the culture. Shisha café’s or parlors were places where friends gather, stories are told, and where friendships are cemented over a smoke and endless cups of coffee. Shisha, in short, was part of the mystique of Arabia.

I had become fascinated with the varying shapes and sizes of the shisha pipes. Depending on the country, they were also known as hookah or narguileh, but in Saudi Arabia, shisha was the most widely used term for the water pipe although western expats also frequently called them hubbly bubblys.” The tobacco smoked was also called shisha, or muʽassel, a heavily fruit-flavored syrupy concoction, with apple and mint being the most popular. The pipes were made from brass and wood, but you could also find glass pipes. Strolling through the souqs at night, my eye was often drawn to the hundreds of hubbly bubbly pipes with their beautiful hand etched designs on their brightly shining brass bowls. Like Aladdin’s lamp, they seemed to me the perfect symbol of Middle Eastern mystery, intrigue and adventure.

But I did not want a brand new shiny hubbly bubbly. I wanted an antique pipe, one that had the character and patina that comes with age and use. That, however, was like finding a needle in a haystack. Having had no success in locating a pipe in Dira souq in Riyadh, or anywhere else for that matter, one vendor suggested I try Al Haraj, the second-hand souq. 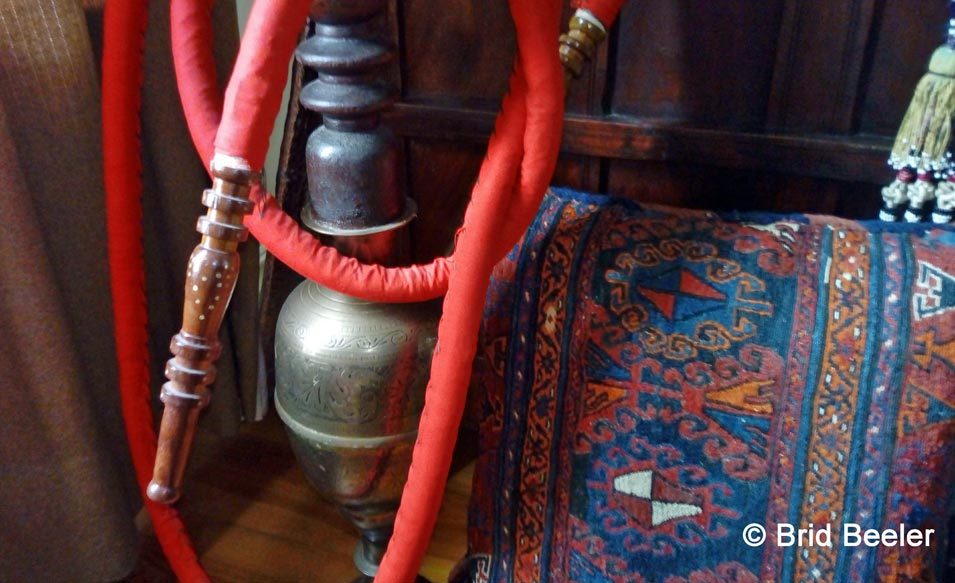 So, one Friday morning my husband and I headed for Al Haraj. Finding it was not straight forward as we overshot the exit and nearly ended up in Al Kharj. Al Haraj is situated south of Batha where all manner of artifacts could be purchased, from furniture to car parts, clothing to kitchen items and after a few hours of searching, we finally found a huge inventory of hubbly bubblys being sold. A shisha parlor was replacing its old stock and the discarded pipes had ended up in Al-Haraj.

We trolled through the pipes, looking carefully for dents or breaks in the brass bowls, or holes in the neck where the heat would have finally burnt a hole in the wood. We finally found one that looked like it was in fairly decent shape. The wooden pipe had burn wear at the top, which was to be expected from the years of use it had seen, but the brass bowl where the water is contained was in perfect condition.

Bargaining began in earnest and the Saudi merchant, who was amused by our presence, was thrilled to have two inexperienced westerners in his midst not having a clue what a second-hand hubbly bubbly should cost. We settled on the huge sum of 50 SAR the equivalent of $13 US! We were elated and left with our find. But our journey did not end there. We still had to find a hose and the hoses in Al Haraj were not what I had in mind. I was thinking of a bright decadent colored hose and it had to be new, not old and tattered. Thus, one night during the week we set forth once more, but, for the area where hoses were sold. Shop after shop selling new hoses and pipes. 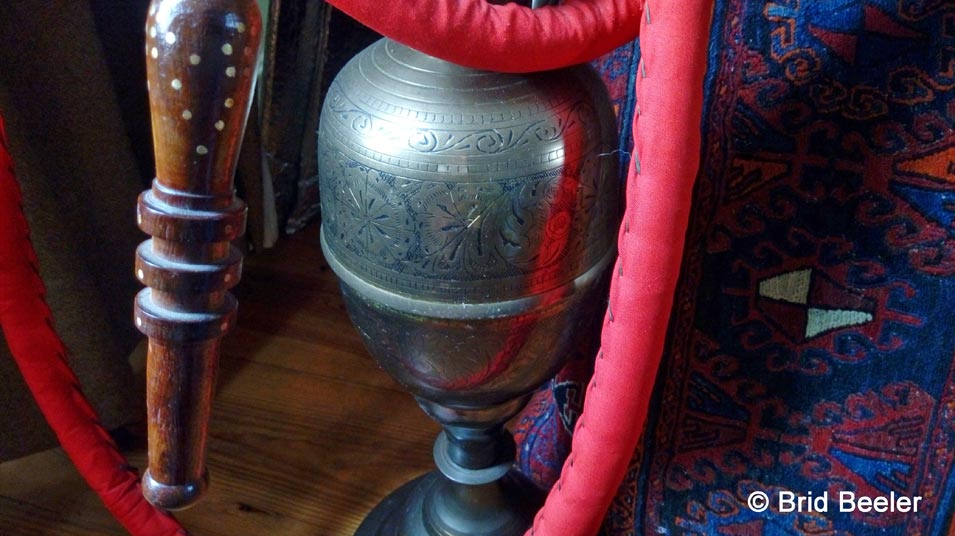 One of the most interesting aspects of living in the Middle East is the souqs, you want to buy gold, you go to where all the gold shops side by side sell in competition to each other. If you want to buy a mattress, the same applies, you go to the souq where all mattresses are sold in shops side by side. From kitchen to electronics, to car parts, spices etc., there are souqs for everything. Unlike the west, you do not have to drive all over town to another store. You go to a hardware souq, if an item is not available in one shop, then you simply walk into the store next door! Shopping is made simple and easy as you stroll back and forth between vendors making sure you leave with exactly what you want. Bargaining, of course, added hugely to the thrill of the hunt and was the key to success.

The shisha hoses came in a variety of colors, green, red, purple, and on and on. I decided on a bright red hose with a wooden mouthpiece. However, no matter how hard I bargained, the hose price was twice what the hubbly bubbly cost - 100 SAR or $26 US for the hose alone! Swallowing my bargaining pride, I paid and became the proud owner of an old, must-be-antique-by-now, hubbly bubbly.

The pipe has successfully traveled through our various household moves around the world and it continues to take pride of place in my home to this day, having never been smoked. Occasionally, a guest is keen to have a smoke, but I won’t let them, saying the heat might split the pipe’s old wooden neck. But secretly I have other reasons. A genie might be living down there in the bowl…and I’m not quite ready to let him out!