The Edge of the World - A View Unlike Any Other

Riyadh — About an hour’s drive from Riyadh begins an off-road route of the same duration. The path is marked, but it is not the classic sandy desert. And as the car begins to vibrate and the wheels struggle to navigate the rocky rubble, you begin to notice all around you umbrella acacias, hedgehogs, dromedaries, bees, and apiaries — the fruits of an uncontaminated desert. 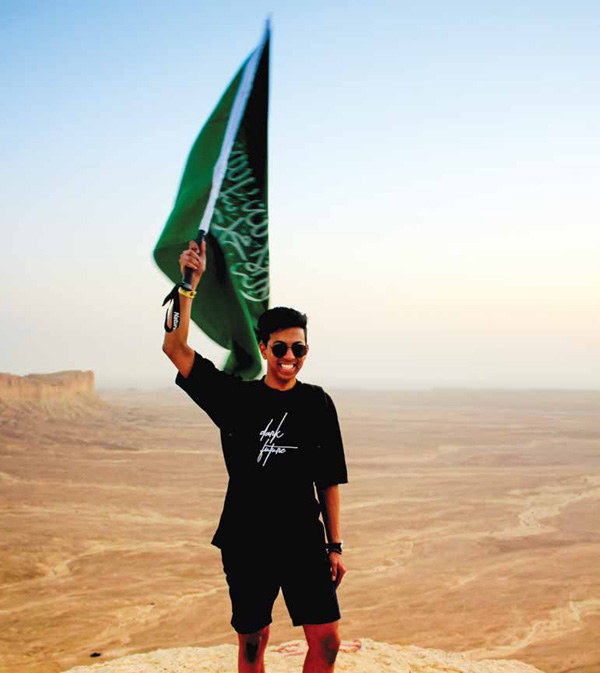 A young Saudi celebrates his ascension of the Jebel Fihrayn, some 300 meters above the valley floor, by taking his photo with the Kingdom’s flag.

On this flat dirt road, nothing suggests the spectacle that will soon be revealing itself. Gradually, on the sides of the road, steep walls rise — immense canyons of flaky rock — as if they were so many overlapping ochre plates. It is time to leave the car and venture out on foot.

This will be an exciting hiking experience. The desert is dark, brownish, and sometimes crossed by lighter segments that seem to create colored trails. It draws you into it, urging you to go up and down some ridges to discover the scenic views beyond. Though the cliffs prove a bit challenging, you eventually reach points where the view takes your breath away.

An immense valley, which extends to the horizon, opens up in front of you, surrounded by high rocky walls and interspersed with high spikes of rock with the most extravagant shapes. This geological landscape panorama that can be enjoyed from the hills is among the most beautiful in the world.

From the ancient ocean floor, old cliffs rise up from the desert to the sky and in the midst of this boundless view, two “columns” stand out, the remains of a cliff eroded by time. From the top, you get the impression of literally being on the “edge of the world.”

If you do the trekking in the afternoon, you can enjoy the sunset when the colors become even more vivid, joining more visitors as the Kingdom opens up to tourism in locations such as this. 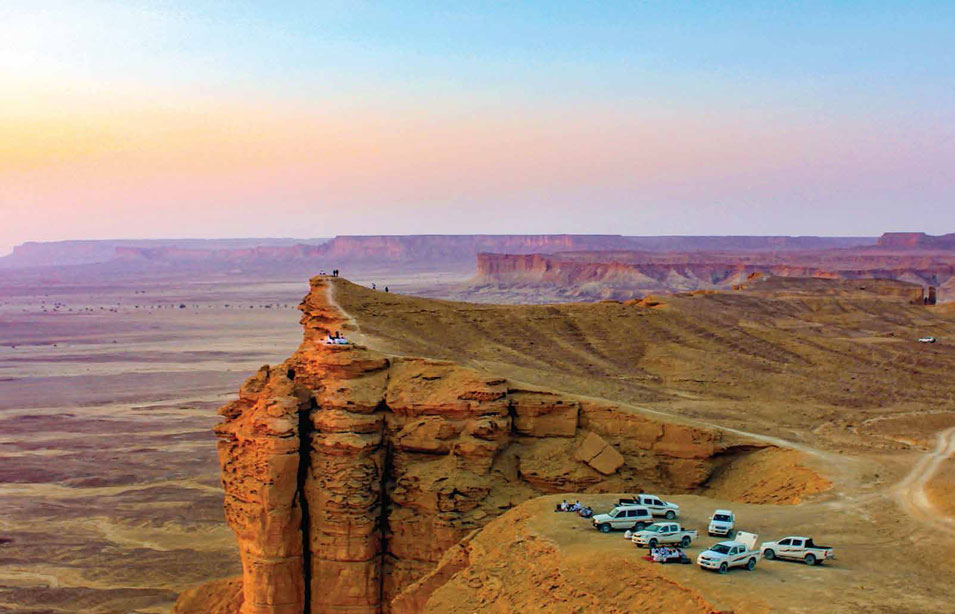 Vehicles gather near one of the scenic overlook areas. While cars, trucks, and SUVs can get you part of the way there, the real excitement of Jebel Fihrayn is exploring the area on foot. Once the base of an ancient caravan trade route that would cross the peninsula from Yemen into the Levant and Persia, the area today is one of the Kingdom’s most visited tourism sites. (Photos: Chiara Ciampricotti Iacoangeli)

The Edge of the World (whose real name is Jebel Fihrayn) in just a few years, has become one of the most popular destinations near Riyadh. This “nickname” was given because of its main attraction — the stunning viewpoints from the top of the 300-meter high cliffs overlooking the surrounding plain. This escarpment is part of the much longer Jibal Tuwaiq, which is one of the most prominent natural features of Saudi Arabia spreading more than 1,000 kilometers (km) from the province of Najran in the south up to Qassim in the north.

It even played an important role in Arabia’s history, as along its base was one of the ancient caravan trade routes that used to cross the peninsula from Yemen into the Levant and Persia.

The cliffs are the result of the tectonic movement of the Arabian plate toward the northeast because of the spread of the Red Sea rift located 1,000 km to the west of Tuwaiq. The clear cut it generated in the sedimentary grounds in the Riyadh area reveals the layers of sediments that accumulated there when the eastern part of the peninsula was a shallow tropical sea during the Jurassic Period 150 million years ago. This is why coral fossils are still visible today, both in the layers and scattered on the ground.

In recent times, some travelers have built trails along the cliffs, allowing access up and down the impressive escarpment. Some of those stone-made trails are still visible today like at the Khashm Zubaydah, 50 km southeast of the Edge of the World. 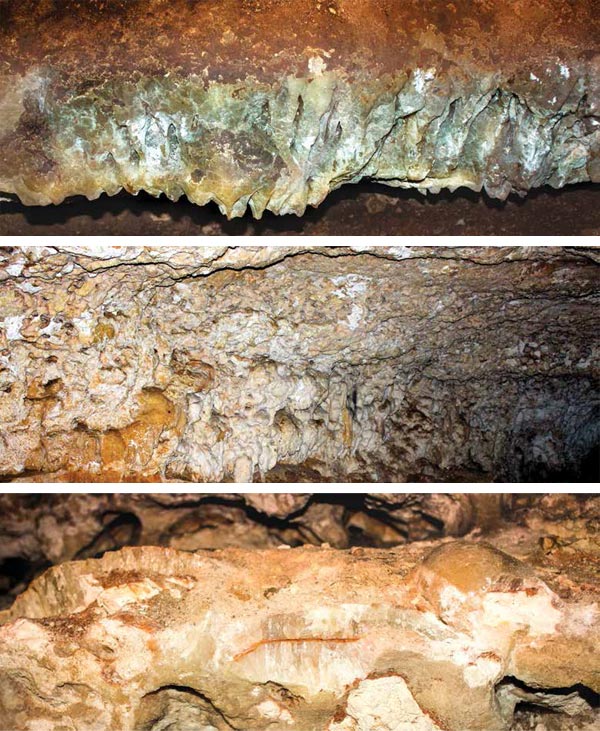 Rock formations in the caves that underly The Edge of the World’s steep outcroppings are as unique as the topography.

The Wonder by Night

As the evening continues, we move to a desert camp in the dark of the night, some small torches marking the way to the caves. Only a small hole in the ground can be seen, wide enough for just one person at a time to enter.

Accessed via a ladder and gradually descending into the deep, cramped cavern where you have to crouch over to visit, some walls are brilliant where the salt created crystallizations. In other places, stalactites of a vivid yellowish color have settled in the inhospitably hot and humid — but certainly ideal habitat for the many bats that flit around — underground.

Back at camp, large tents and immense carpets are spread out on the ground. Fires lit, the intensity of their scents wafts through the air — mint tea and cardamom coffee, the smoke of the shisha, and the meat on the grills. The telescope is ready to visually explore the starry sky and the craters of the moon. There are those who play, those who love to chat, and those who savor the traditional kebab barbecue.

A boy takes an oud out of its case. He will soon be surrounded by other young guys, the sound of his music and the accompanying singing become the perfect soundtrack for this evening.