The Art of Communication is the Language of Leadership - James Humes

Saudi Aramco Promotes the Development of Communication and Leadership Skills

I appreciate Saudi Aramco management for their continuous support of their employees' development towards achieving the required communication and leadership skills by allowing them to not only form a Toastmaster club within the company but also permitting them to attend its meetings during working hours. In addition to this, Toastmaster International membership fees were borne by the company for those who showed interest in it.

Based on the above scenario and motivational quotations, I joined the “Rastanura Toastmasters Club” (RTC).

By joining RTC, I made a wise decision. It has been a wonderful experience, an outstanding and marvelous journey throughout. The club environment was excellent; club meetings were full of energy and everyone was friendly. Meetings were multinational gatherings of cheerful, smiling faces that made you forget work stress and focus on learning communication and leadership skills. Later on, I came to know that in every club meeting an active member is assigned to welcome new members. At the end of the meeting, the visitor is encouraged to comment on the proceedings of the session; consideration is given to any suggestions.

The first speech one gives is titled an Ice Breaker. I recall a club member, a Saudi engineer, narrated that in his childhood he had a fight with his friend who was stronger than him. To exact revenge, he decided to learn Karate. He joined a Karate Club. Once he reached the peak of the sport and achieved his Black Belt, he decided rather than taking revenge, he would forgive and forget.

Giving a Humorous speech is an added value and is usually eagerly awaited. I recall a winning speech by a Saudi participant titled Four Seasons. It was the story of how, on his mother’s advice, he married four women with different age gaps. The consequences were hilarious and left each one of us in stitches.

Mr. Hussam Dashash was the founding member and the first President of the newly established Rastanura Refinery Club. He is always smiling, encouraging friends and colleagues to join the club. I appreciate his dedication to learning and teaching. During his assignment in the USA, in his leisure time, he used to attend the regional Toastmaster Club meetings, which shows his love for public speaking skills and its development.

Finally, my story will be incomplete if I do not mention the club's hospitality. Based on the time of the meeting, a variety of delicious items were served:

The following is the picture published in the Saudi Aramco’s Arabic Publication, showing the winners in the contest with Managers (Ali Naimi and Kunfar) of Rastanura Refinery in the year 2006. 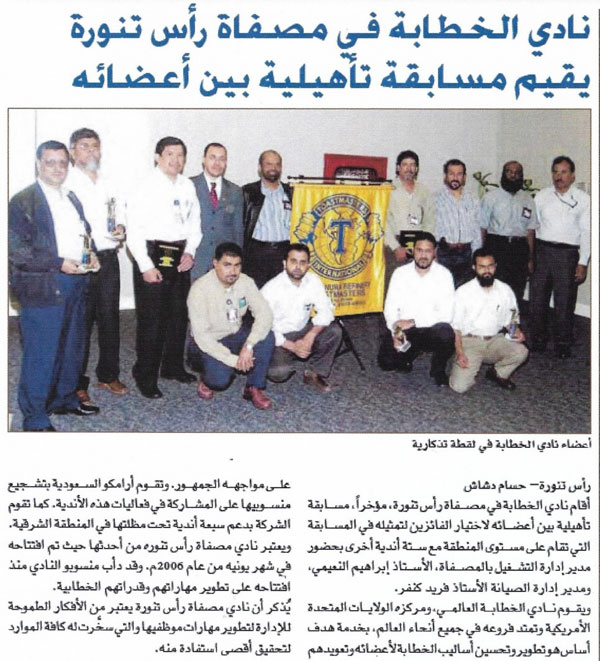 The following picture is the weekly meeting at the Ras Tanura Refinery Excellence centre: 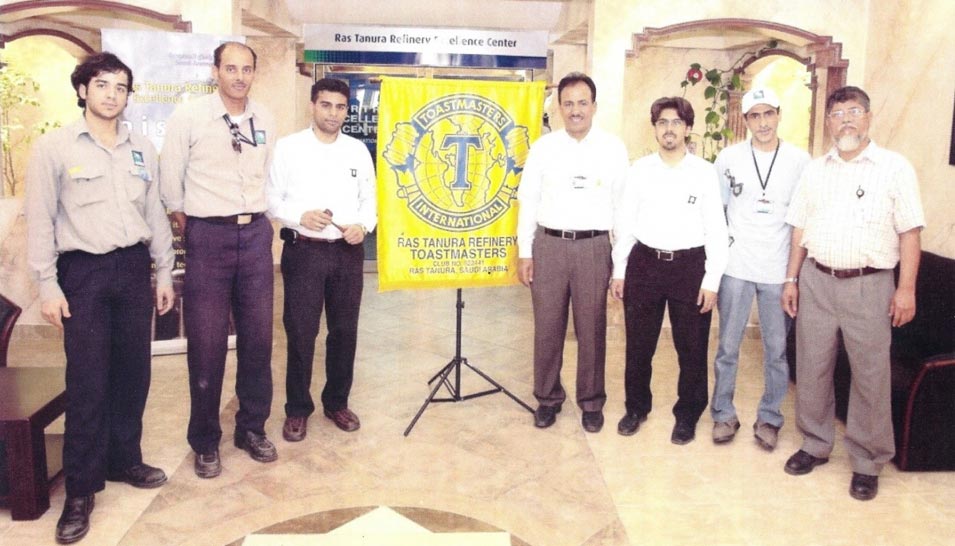 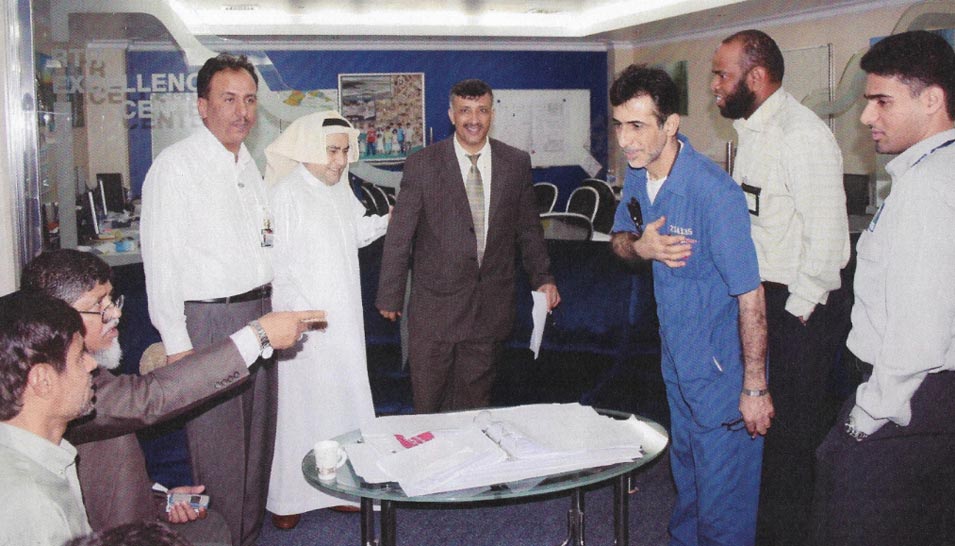 I am giving a prepared speech of seven minutes in the club meeting: 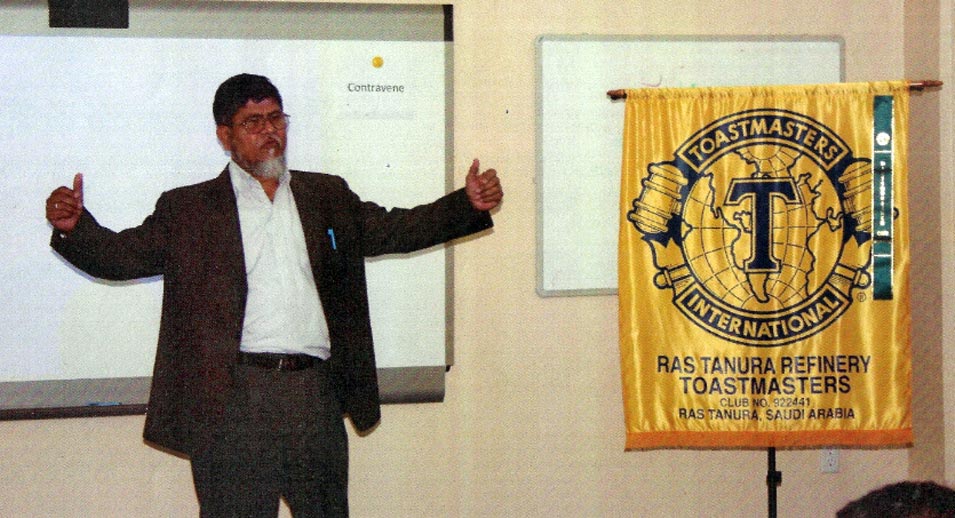 Every Toastmaster (participant), after completing and submitting evidence of successful delivery of ten prepared speeches, is awarded a certificate. 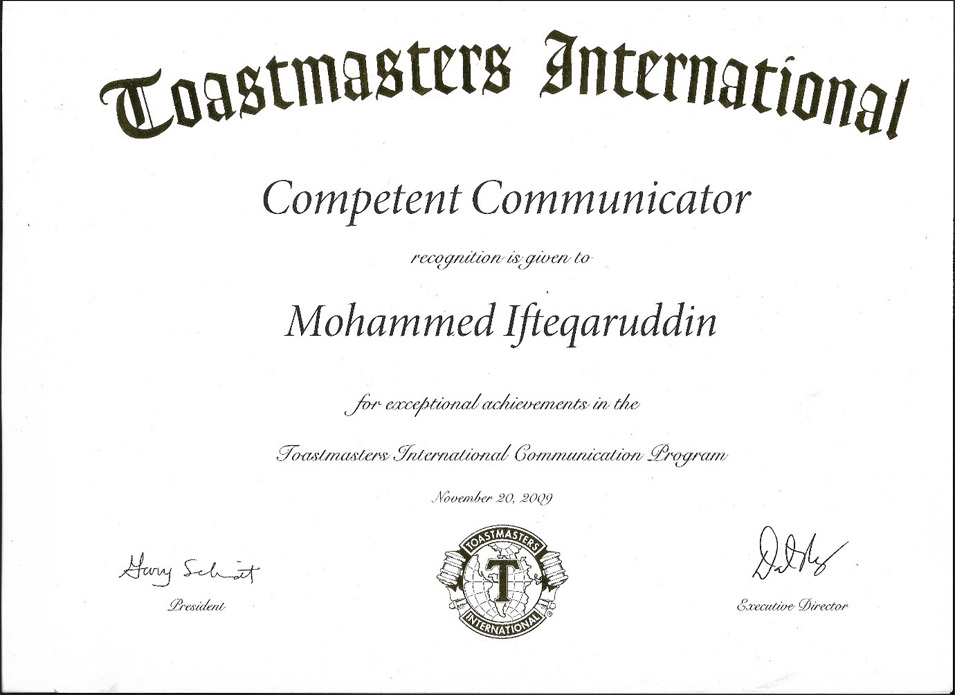 Every year club elections are conducted. I have held the following positions: 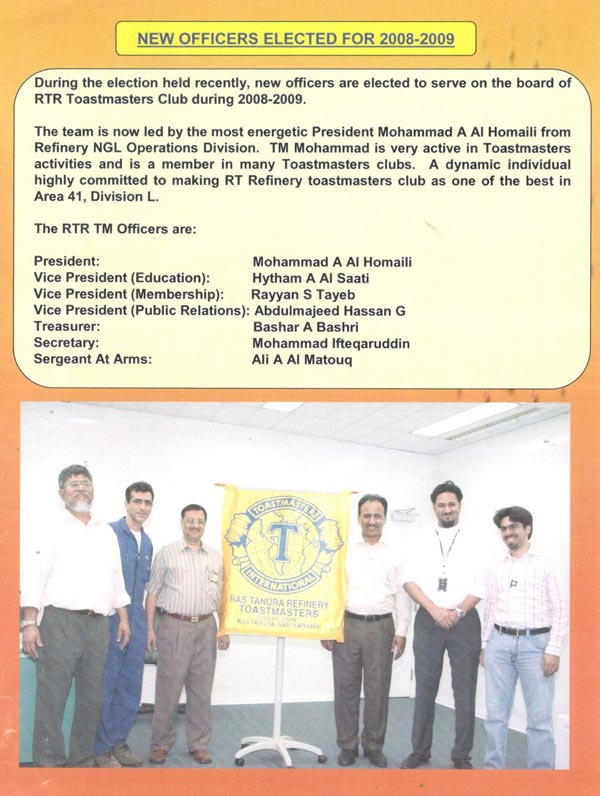 Toastmasters International is a US-headquartered, non-profit educational organization that operates clubs worldwide for the purpose of promoting communication, public speaking, and leadership.

During the meetings, the following roles are given to senior members, which is indirectly an education for self-learning:

The following is the certificate of participation at the Club level contest for Prepared Speech: 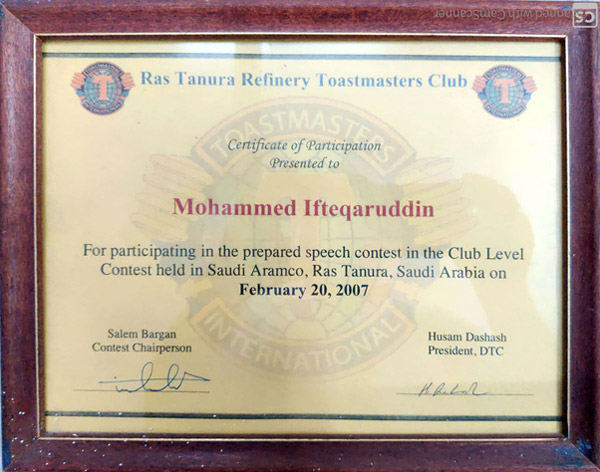 The following is the certificate of participation at the Area Level Contest which was held in Dhahran for Table Topic. 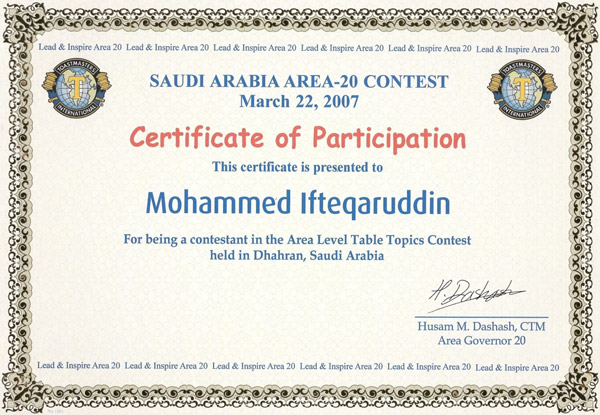 To support the coming generation, I recommend we promote excellent communication and leadership skills. I strongly suggest our global village community experts come forward and participate in similar activities which in turn gives us time to socialize as well as provide positive input to youngsters in the pipeline.

I conclude my article with the James Humes quote; “The art of Communication is the language of Leadership.”