Tales of the Bedouin – Part XVII: Roots of Thanoon

In this piece, Mark Lowey relates an alarming incident in the early childhood of Bakhait Al Marri, son of a Bedouin gentleman who Mark met in 1979.

Tales of the Bedouin – Part III Bathan the Well Digger and His Son, Bakhait

In the spring of 1969 Bakhait Al Marri was eleven years old. His people were pastoral nomads moving with their camel herds to find grazing as the seasons changed. Their territory stretched from Naeriyah in the north to the Empty Quarter in the south.

The family was encamped near the Hidbah water well around 220 kilometers southeast of Haradh. It was a familiar location – this particular well had been excavated by Bakhait’s father, Bathan, 24 years earlier. [1] 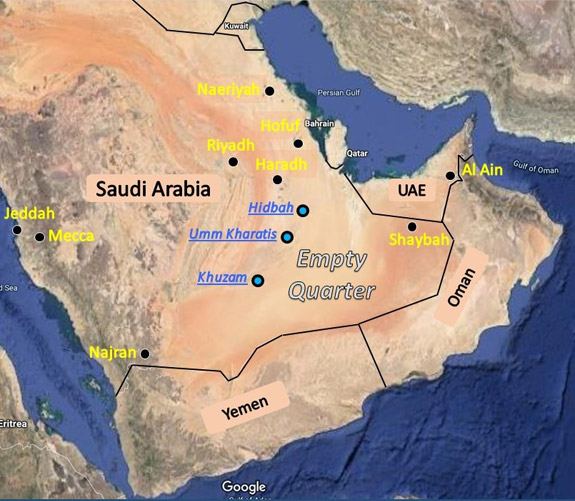 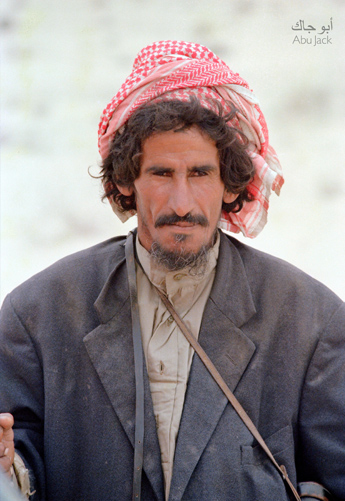 Bakhait and his elder sister were out tending the camel herd when, suddenly, a fierce sandstorm blew up. The high winds kicked sand into the air and there was no visibility. Young Bakhait lost contact with his sister and the camels. He knew he must find them and bring them back safely to the tent encampment. Disoriented by the lack of familiar landmarks, he went this way and that, calling for them. He heard nothing in response. He was now hopelessly lost.

He roamed until nightfall, found a protected spot next to some tall ghadh trees, and fell asleep. When he woke early the next morning his thirst was unbearable. Bakhait had brought no water. His father taught him that certain desert plants can provide lifesaving moisture in case of emergency. He tried to remember which plants could save him.

He searched and searched and then he saw a beautiful flower with a bloom of lavender and yellow. It looked succulent. Quickly he dug a hole around it and found its roots. They were white and plump. He pulled them up and bit into the root, sucking the moisture greedily. It tasted wonderful and he felt happy. But soon he fell ill, became dizzy and passed out, unconscious and alone in the desert.

Bakhait had consumed the juice from the Thanoon [2] root, mildly poisonous to humans. It must have been an allergic reaction. When very hungry, donkeys and camels sometimes nibble on its flowers, but they leave the roots alone.

At dawn the winds calmed, and visibility improved. His family began a desperate search on camelback – they had no vehicle. It wasn’t long before they came upon poor Bakhait. He was still breathing but unresponsive. They tried to revive him, and he started to regain consciousness. They tried to give him water. He couldn’t keep it down. Any milk or food, he would vomit immediately. He was severely dehydrated and semiconscious.

Bakhait’s mother and father tied him to the back of a camel, and they set off for Haradh, 220 kilometers north. It took two days to reach their friend there who had a car. They placed Bakhait in the back seat and traveled as quickly as possible to Al Hasa.

At that time, there were no paved roads between Haradh and Al Hasa, only well-worn desert tracks. Hours later they arrived at the hospital in Hofuf. Bakhait’s condition slowly stabilized with the help of intravenous fluid and injections. Bakhait began a one-year recovery period that required weekly hospital treatments. Luckily, Bakhait was able to stay in the home of a close cousin who lived in Hofuf. Alhamdullilah, Bakhait survived!

After the yearlong treatments, Bakhait fully recovered and returned to his family and the rhythm of Bedouin life, traveling with the family, and tending to the camels. He eventually married and had three sons, Muteb, Bathan, and Abdullah. He has two grandchildren, Abdul Aziz and Baina.

Nowadays, the 64-year-old Bakhait thinks back on that awful episode in his life. He is fortunate to have three very capable sons who expertly manage the family camel business. He watches young Abdul Aziz play with his older sister, Baina, as they tease the family’s saluki dog, chase their uncles’ pickup trucks, and hug their favorite camels. His are the simple joys of watching his family grow. His is the deep satisfaction of sharing with this next generation the ways of Bedouin life.

Bakhait still feels some discomfort from his childhood illness – he is always thirsty and keeps fresh water nearby at all times – constantly sipping.

And, now firmly embedded in his family’s lore is Bakhait’s wise admonition to avoid the roots of thanoon. 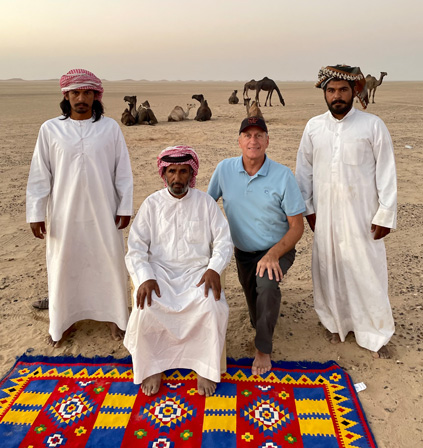 Bakhait (seated) and his sons Muteb and Abdullah with Abu Jack in 2021. 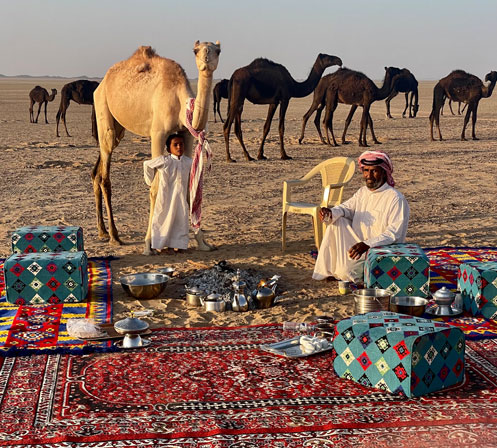 Bakhait and grandson Abdul Aziz relax before breakfast in 2021. 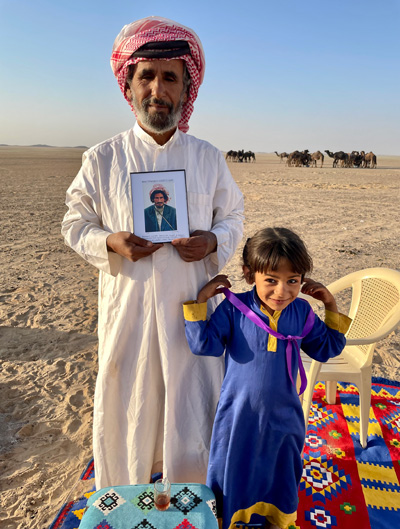 Bakhait and granddaughter Baina hold a photograph of the family patriarch, Bathan. 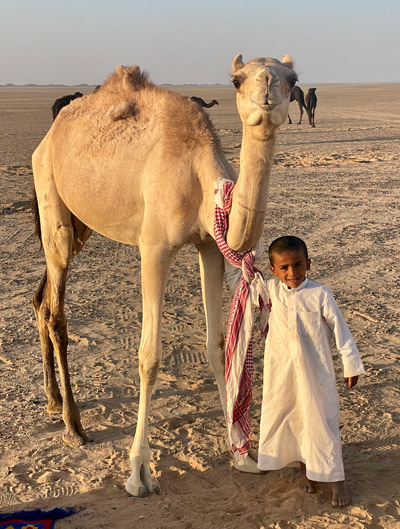 Abdul Aziz with his favorite camel, Shahin, in 2021. 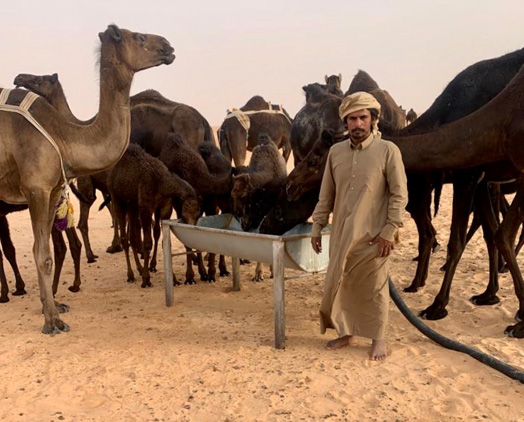 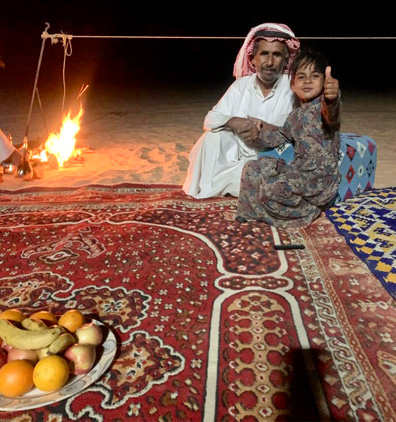 Hidbah, located 220 kilometers southeast of Haradh, was the first well excavated by Bathan Al Marri and his wife Dhamah, as newlyweds, in 1945. It is 45 meters deep. A 2011 expedition team, led by Quriyan Al Hajri, visited Hidbah on Day 2 of their journey into the Rub Al Khali (Empty Quarter). Bakhait and young Bathan accompanied Quriyan and provided the transport camels.

Members of the 2011 team are pictured extracting water for the camels before embarking on a long route through the sands. Quriyan, pictured center in the brown thobe, leans back as he holds one end of a rope on a pulley that has been dropped into the well. Instead of camel power, they used a pickup truck to lift the water from the depths. Concrete walls were placed in 1990 for stability and to prevent the well from caving in and from being covered with sand.

Desert hyacinth (Cistanche tubulosa), also known as Thanoon, Fox radish, and “Ginseng of the Desert.” It is a branchless, pyramid-shaped plant with bright yellow flowers, which bloom between the months of December to March. The reason the desert hyacinth isn’t green is because these plants have no chlorophyll (the pigment that makes plants green). Instead, the desert hyacinth lives off other plants, called a “host plant,” to obtain its nutrients, making them an all-flower bearing parasite plant. The most preferred host for this parasite is the “Miswak” or arak tree. The extract of this plant is used to enhance brain functionality and cognitive abilities such as learning and memory. It has also been traditionally valued for its anti-aging properties and to improve energy and stamina. Sadly, the desert hyacinth is threatened due to over-exploitation for its valuable medicinal properties. https://connectwithnature.ae/knowledge-hub/desert-hyacinth 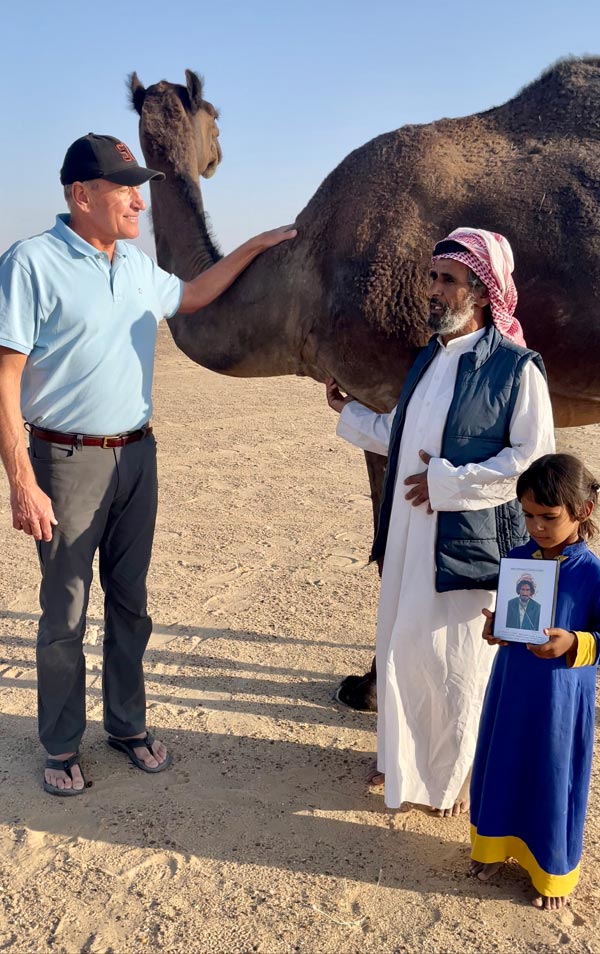 Abu Jack, Bakhait and Baina with Eida the camel in 2021.