Tales of the Bedouin–Part XV: The Water of Umm Al Abel

In this piece, Mark Lowey, “Abu Jack,” is escorted deep into the Rub Al Khali (Empty Quarter) and told the astonishing story of a water well named Umm Al Abel.

In 2001, a 40-year-old bachelor from a Saudi Arabian town decided it was time to marry and start a family. After all, family is everything and he was getting older. Who would take care of him in his twilight years? And so it was that he found a suitable wife.

Things did not go as hoped. Twelve years of marriage later, there were no offspring. The couple consulted specialists and tried every possible method of conception. Nothing worked. The doctors told him, “You will never have children – you are infertile.” He gave up.

In 2013, troubled and disappointed, he left home to spend some time alone in the desert.

He traveled deep into the Rub Al Khali. 400 km southwest of Haradh and 240 km from where the black top ends, he found himself at Umm Al Abel. It was springtime, and winter rains had made the surrounding desert green with abal shrubs and grasses. He set up his tent a short distance from the water well and spent his days enjoying the fresh air and hunting for houbara bustard and hare. The hunting was good.

Each day he would visit the water well to drink and bathe. The water was sweet and clear. He became acquainted with the friendly Bedouins who visited the well regularly as they migrated with their camels. After six weeks he returned home to his wife.

During my visit to Saudi Arabia in November 2021, Quriyan Al Hajri, the famed desert legend and Aramco retiree, invited me to accompany him to the Rub Al Khali to visit a mutual friend. At Al Khinn Junction, 100 km south of Haradh, we met our friend’s sons, Muteb and Abdullah. Abdullah rigged up a two-way radio communication system on our Toyota Landcruiser. We paused at a petrol station and Muteb filled three 200-liter barrels with gasoline for the journey. With the full barrels securely tied down in the bed of Muteb’s Toyota Landcruiser pick-up, we then headed south.

Soon we came to the end of the paved roadway and continued onward, following Muteb along wide, well-traveled, soft-sand tracks. Abdullah rode with Quriyan and me in case we became separated from Muteb. The radio would crackle to life when Muteb announced a turn to the west or pointed out a particular landmark. 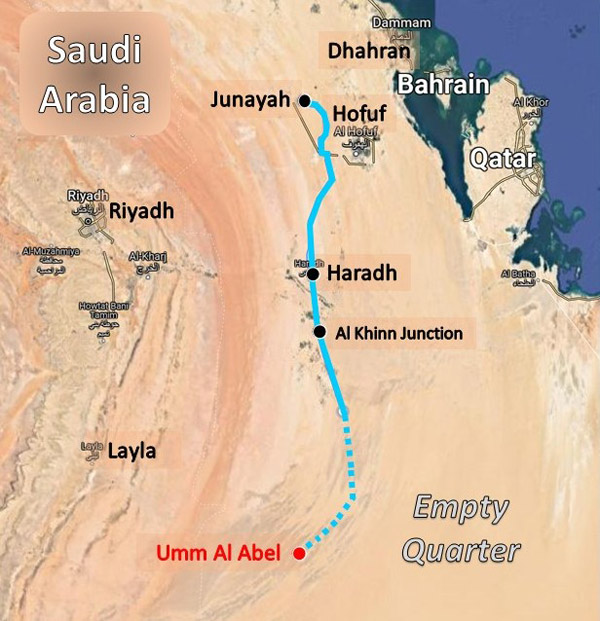 The route from Quriyan's farm in Junayah, 600 kilometers to Umm Al Abel.

After four hours of chasing the speedy Muteb, gliding over and around low dunes and trundling across hard gravel patches and sabkha, we arrived at Umm Al Abel. It was a welcome break. I tasted its water for the first time. It was delicious. 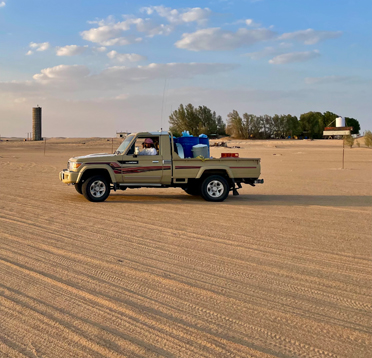 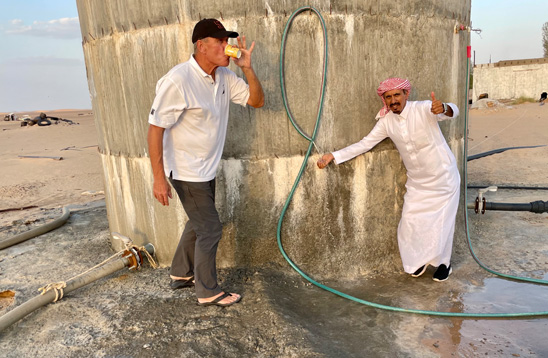 After our break, we drove on, and Abdullah took this opportunity to tell us the incredible story of the man who visited Umm Al Abel. Below is the translation. 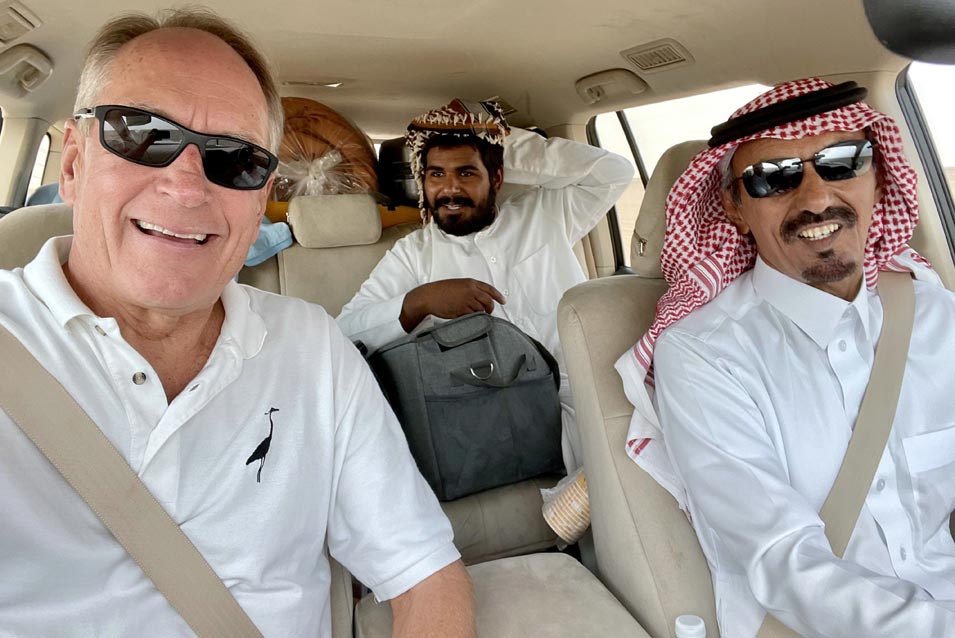 “Refreshed from his holiday at Umm Al Abel, he returned to his wife. Incredibly, after twenty-five days, the doctor told him your wife is pregnant. It was a big shock for him, you know. He felt like he could fly from happiness when he heard the news.”

“The doctor asked him, ‘Where did you go? What did you do?’ ‘I went to the desert. I drank water from Umm Al-Abel,’ he explained. The doctor was surprised and soon came to Umm Al Abel himself. He took samples of the water and brought them to a laboratory for analysis. Healthful minerals such as iron and iodide were found. The doctor concluded that the water, while beneficial, contained no magical ingredient that would cure infertility.”

“Alhamdullilah, thanks to God, this is the life.”

Abdullah went on, “He was overjoyed when his wife gave birth to a son. Two years later they had a second son. Now a father of two, he returned to Umm Al Abel in 2019. He greeted the local Bedouins with his good news. He arranged for the construction of a 16-meter-high cylindrical concrete water storage tower and other improvements to the well. In gratitude, he built it for the people, for us, for the Bedouins.”

“Now he comes to visit one month a year – to meet his friends, see the tower, drink the water, pray here, and raise his hands to God.”

“Alhamdullilah, Abu Jack, we are here,” said Abdullah. Having quenched our thirst at Umm Al Abel, we pondered this miracle of the desert as we continued our journey. 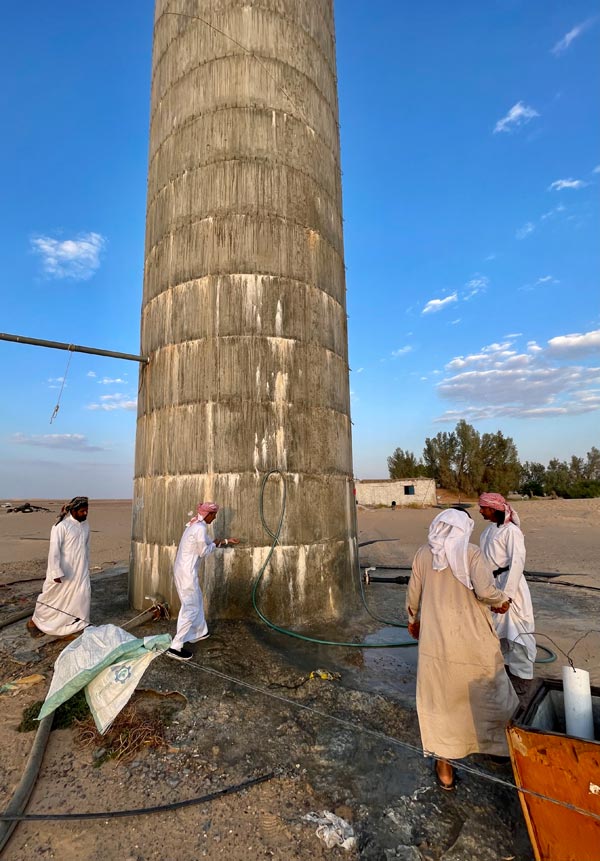 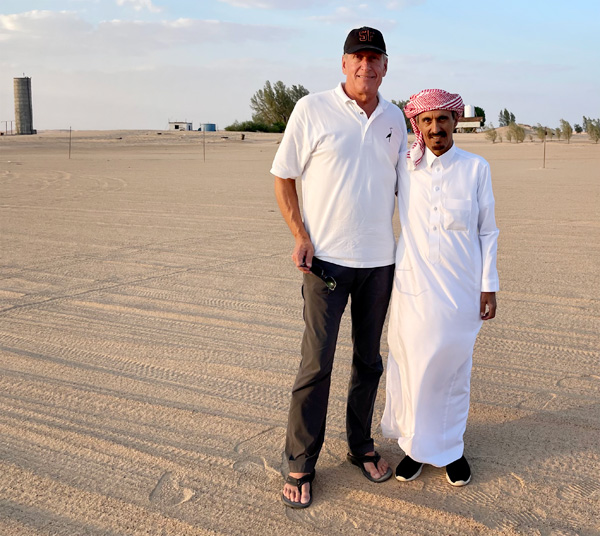