Taking to the Water: Vignette from 'Tales from the Desert: An Arabian Memoir' 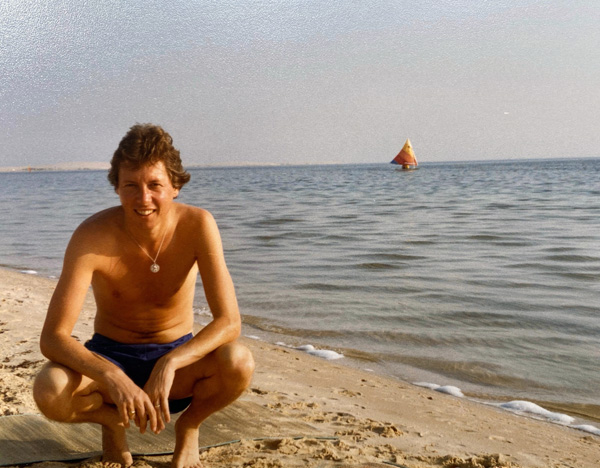 With its headquarters in Dhahran, close to the shores of the Arabian Gulf, the company had its own private beach and yacht club at Half Moon Bay. Entry to the beach was restricted to employees and their families, while membership of the yacht club was dependent upon owning a registered boat. Many employees had boats, some were power boats, but most were typically catamarans, small mono-hulled yachts, or windsurfers.

The beach was the place to head at the weekends, either for walks along the sand, or to splash around in the crystal clear and usually very warm waters of the bay. The bay was virtually landlocked and stretched almost thirty miles to the opposite shore and the incredibly saline water was rarely rough. In true Saudi style there were many rules; all craft had to be removed from the water by sundown and each vessel, including windsurfers, was required to have a name and a coastguard registration number. 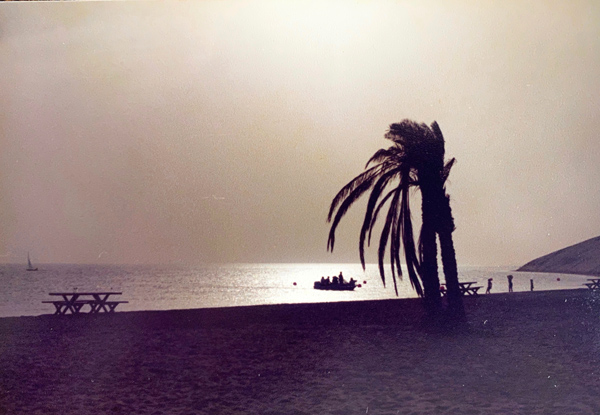 Sundown at Half Moon Bay

The Arabian Gulf is a very shallow sea, at its deepest point it is only three hundred feet deep and within the confines of Half Moon Bay it was no deeper than fifty feet. Despite the sandy bottom and virtual lack of coral, or marine vegetation, a surprising variety of marine life existed. Crustaceans, fish, dolphins and even the occasional dugong called this place home.

It was an ideal place to learn to sail, or scuba dive. I decided to do both. The notice board in the mail centre was the place to look for anyone wishing to buy just about anything, so when I saw an advertisement for a fairly antique windsurfer, it seemed the ideal craft on which to learn. 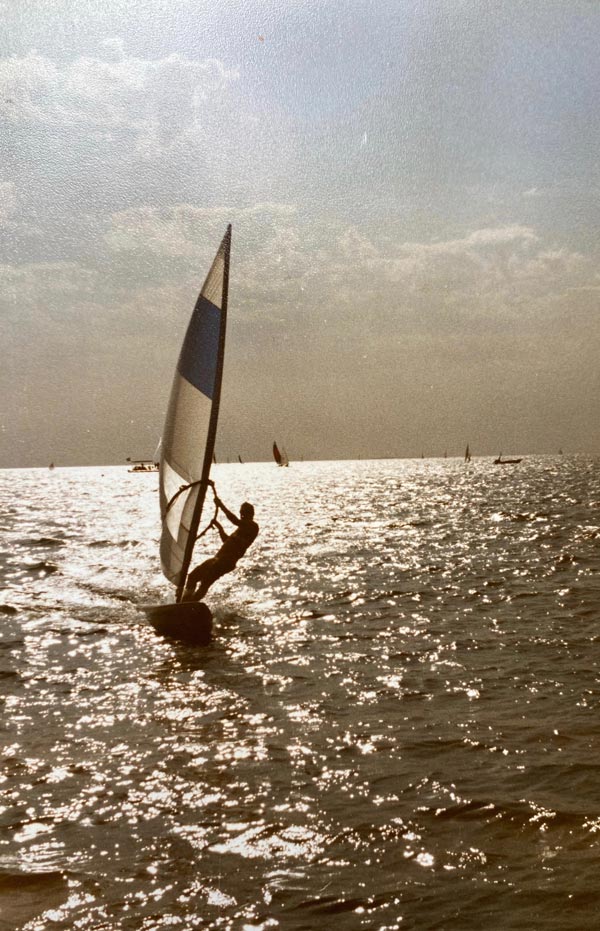 I duly bought it and then, with the assistance of the secretary of the yacht club, began the process of registering it with the appropriate authorities. This involved choosing a new name for it and so my new ‘vessel’ was given the unimaginative name of ‘Waverider’.

A couple of weeks later the paperwork duly arrived which included a registration certificate which must be kept on board at all times the craft was in the water. Clearly the coastguards were not familiar with the complete lack of any watertight space on a windsurfer. 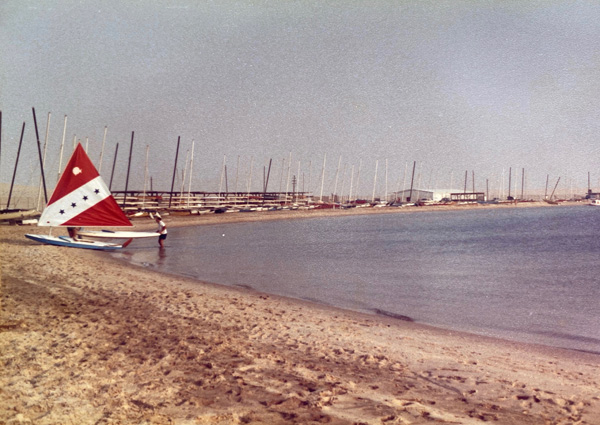 The yacht club secretary assured me that as as long as the registration certificate was kept in my car when I was using the windsurfer, then it wouldn’t be a problem. As a fit and healthy thirty two year old, I found windsurfing to be more strenuous than I had anticipated. The windsurfer was an old model and fairly large and cumbersome, but it was far more stable than some of the later models. Though ideal for learning, the size and weight of the sail made it very difficult to manoeuvre and should the sail fall in the water, it was extremely difficult to pull it back to the upright position.

Needless to say, I spent a great of time falling into the water, but the sea was like a lukewarm bath during the summer months, so it was no great hardship. After a few weekends when I spent more or less all the daylight hours at the beach, I gradually mastered the art of gybing and tacking and felt reasonably confident enough to venture further away from the beach. It was an exhilarating experience to catch the wind and pull on the bar, leaning backwards to gain maximum speed over the crystal waters of the Gulf and the antique surfboard began to live up to its name.