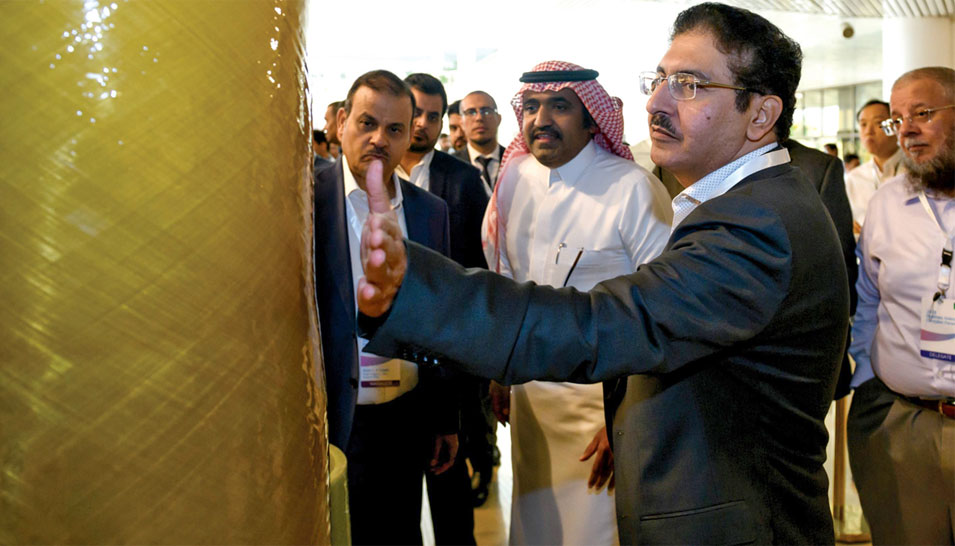 Mohammed A. Al Hatlani is joined by other Saudi Aramco management in reviewing anti-corrosion activities on display by vendors at the recent Internal Corrosion Forum held in Dammam. Al Hatlani, who was the event’s keynote speaker, highlighted that internal corrosion mitigation is a key factor in pipeline integrity specifically, and the company’s integrity programs in general.

Internal corrosion in pipelines is one of the most significant challenges facing Saudi Aramco on a daily basis, more than 200 attendees from Saudi Aramco organizations were told recently at a forum and exhibition.

Mohammad A. Al Hatlani, general manager of Pipelines, opened the Internal Corrosion Forum, noting the cost of corrosion globally is approximately $2.5 trillion. Saudi Aramco, he added, recognizes that effective corrosion management — in conjunction with other ongoing nonmetallic materials development, deployment of new technologies, as well as best practices in inspection, detection, correction, and prevention — can significantly reduce such risks and costs.

Al Hatlani said the forum provided an opportunity to enrich knowledge and exchange ideas and best practices with a variety of organizations and subject matter experts — both within Saudi Aramco and externally. “I have seen an increase in participation in these types of events across different organizations. We can see the high level of interest among all of the participants,” said Al Hatlani. A series of presentations explored in detail some of the most pressing areas of pipeline integrity.

The Continuing Fight to Cut the Costs of Corrosion

Effective management of corrosion is critical to the health of the oil and gas industry. According to the National Association of Corrosion Engineers, the total annual cost of corrosion in the oil and gas production industry is estimated to be $1.372 billion — including $589 million in surface pipeline and facility costs, $463 million annually in downhole tubing expenses, and another $320 million in capital expenditures related to corrosion.

A number of presentations were given on key topics, including:

Pipeline Integrity Critical Across the Board

Praising the forum’s ability to effectively engage participants, Al Hatlani highlighted the importance of the event. “It really focuses on one of the most important aspects of our business, which is pipeline integrity. We really pay a lot of attention to that because it is essential for safe, reliable, environmentally friendly, and cost-effective operations,” he said.

Al Hatlani added that internal corrosion mitigation is a key factor in pipeline integrity specifically, and the company’s integrity programs in general. He further added that interaction and engagement on the topic would continue beyond the event itself.

“We will get feedback from the participants so that we can improve the forum. Also, we will summarize the content and the issues we have discussed and the solutions proposed,” Al Hatlani added.

“Pipelines, Distribution, and Terminals (PD&T) is playing a very important role because we cover everything across the Kingdom and all of the way to the terminals where we distribute the company’s products to the rest of the world,” he said.