In Parts 1, 2, and 3, the party of four toured Syria’s capital, Damascus, the ancient Roman city of Palmyra, and Krak des Chevaliers castle.

On our last evening in the village beside the Krak des Chevaliers castle, three of us ordered pizza at a small café. Unfortunately, the food was tainted, and the next 48 hours was living hell.

I had only eaten a bite or two of the pizza, and I felt OK the next morning. With two unwell travelers horizontal and trying to sleep in the back of the van, I took the wheel and we departed for Aleppo, a three-hour drive. My wife, Ann, who had not eaten the pizza, served as the navigator that day, tracking our progress on the Bustin’s trusty iPad tablet, watching the GPS on the screen as the blue dot inched northward, a remarkable feature considering the general lack of internet service. 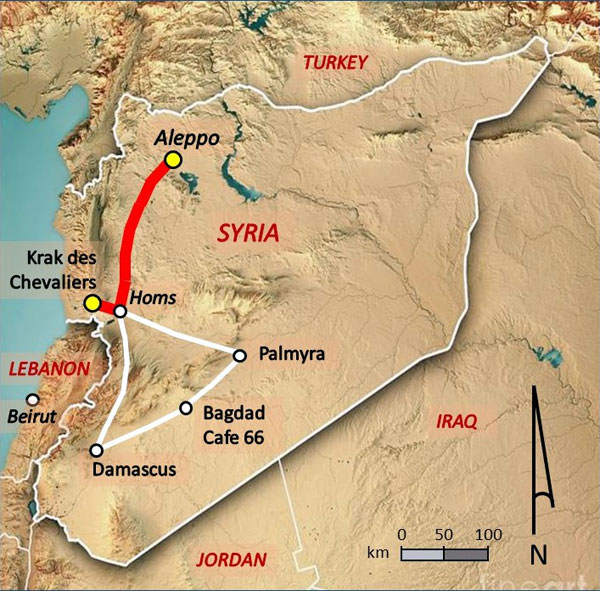 The Route from Krak des Chevaliers to Aleppo. 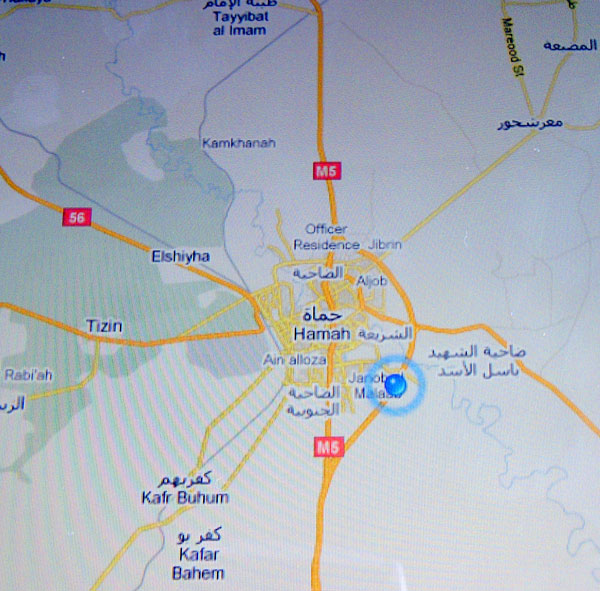 Tracking our position on the ring road around Hamah, north of Homs. 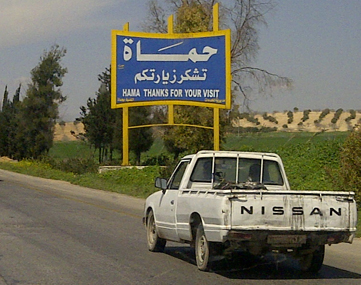 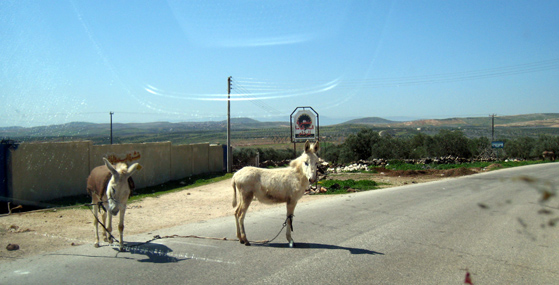 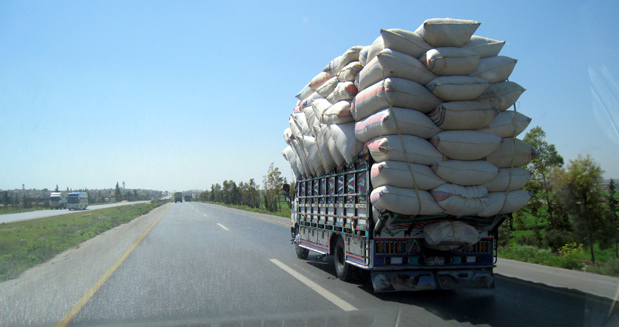 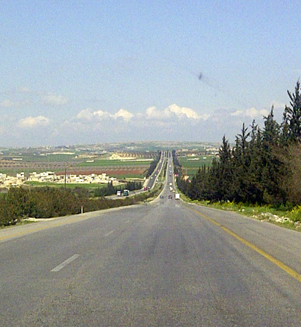 As I was driving, I started to feel a little uncomfortable. My legs began to cramp, and I felt restless. I began perspiring. I, too, now had a mild case of tourista. Nevertheless, we persevered and finally reached the outskirts of Aleppo.

The traffic was heavy, and the streets of Aleppo were crowded. From a distance, we could see the main landmark near our destination, the famous Citadel, a large medieval fortified palace on a prominent hill in the center of town.

As previously instructed by the hotel, I parked the van near a petrol station and set off on foot down alleys too narrow for vehicles to find our hotel, the Beit Salahieh. Two hotel employees accompanied me back to the van and helped transfer our luggage to the hotel.

After checking in we stumbled to our rooms to sleep and relax for what seemed like days. 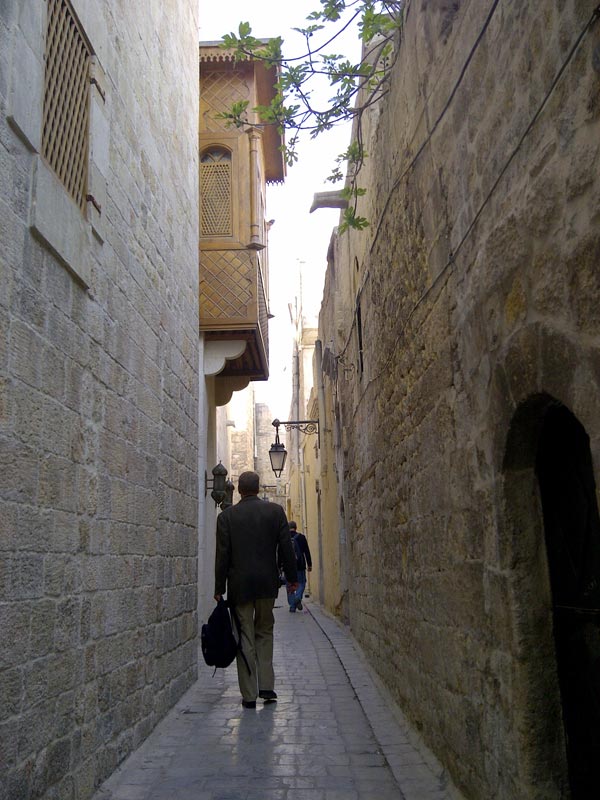 Named after the Salahieh family, once the most prosperous merchants in Aleppo, Beit Salahieh, is a beautiful traditional courtyard home – now converted to a hotel – located within the heart of the Old City of Aleppo. The property opened in August 2010 following a four-year restoration project to return the buildings to their former glory. Beit Salahieh’s 42 ensuite rooms and suites are arranged around three attractive courtyards and have been designed to the best international standards. Deluxe rooms have views over Aleppo’s magnificent medieval Citadel, while the spacious suites are situated in a separate courtyard. The beautiful oriental Damask silks, marble hammams, and traditional 18th century style mother of pearl and walnut inlayed furniture are used throughout the property and enable guests to experience the authentic comfort and tranquility of a traditional Aleppine house. [1] 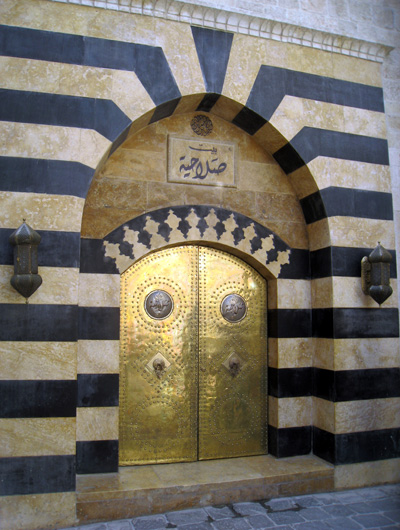 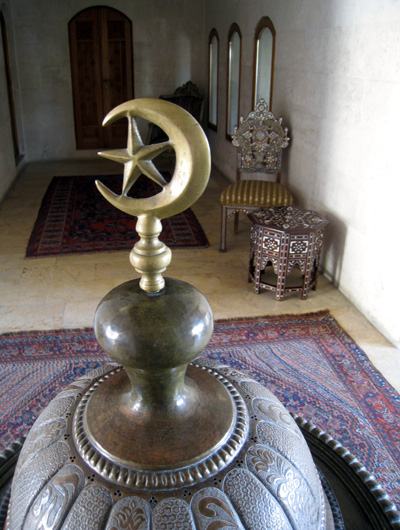 Our room had a private sunny courtyard outside the window with a view of one of the skylight domes that provide natural light to the hammams (steam baths) below. 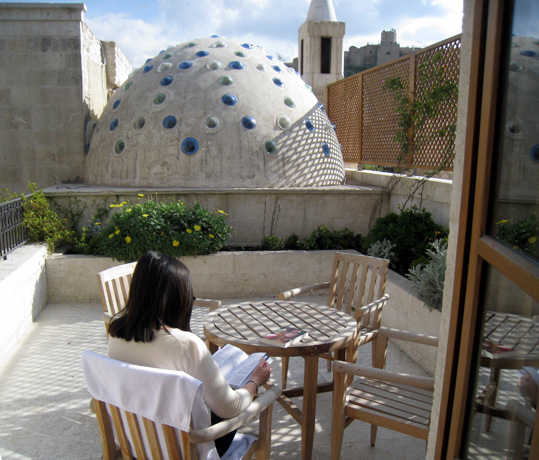 The private courtyard outside our window. 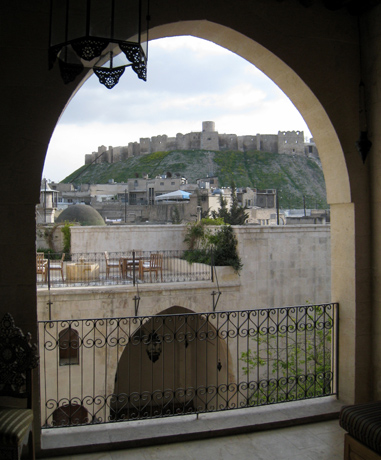 The view of the Citadel from our hotel.

At last, we felt well enough to venture out of the hotel. We strolled slowly through lively Old City neighborhoods, where children played and cars were squeezed into impossible parking spots. 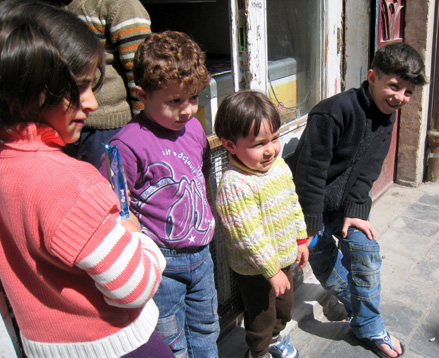 Aleppine children in the alleys of the Old City. 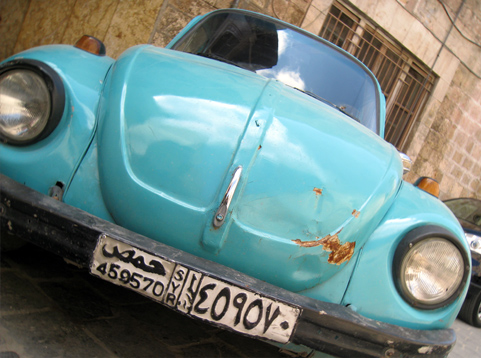 Suddenly, we emerged from the Old City’s byzantine tangle of alleys and into the bright sunlight. There was the magnificent Citadel! Sadly, we had neither the time nor the energy to explore the Citadel – only to walk around it. After all, we had toured the mediaeval Krak des Chevaliers castle just two days before. Now our main priority was to see the famous Aleppo Souk. 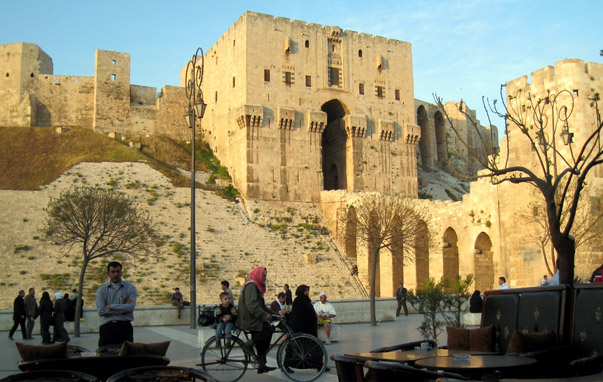 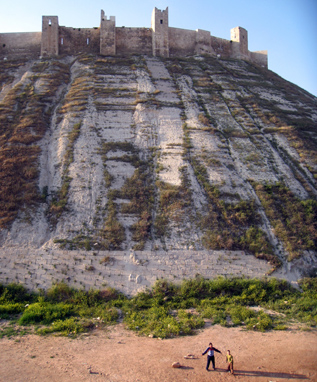 Children play in the Citadel‘s moat.

One of the oldest continuously inhabited cities in the world, Aleppo preserves remnants of more than four millennia of Near Eastern history. The Citadel of Aleppo is a densely layered microcosm of this long and complex history. Most of the structures on the citadel were erected by the Ayyubids in the twelfth and thirteenth centuries, but substantial structures are also preserved from the Ottoman period (beginning in the sixteenth century). The citadel was built on a natural limestone outcropping rising some 30 meters above the level of the surrounding plain. (Until 2012,) its high walls, imposing entry bridge, and great gateway remained largely intact and dominated the skyline of the city. [2]

We finally mustered the energy to venture to the incredible Aleppo Souk, the largest covered market in the world. It did not disappoint. We explored the seemingly endless maze of shops offering everything from the famed handmade olive and laurel soaps of Aleppo to leather goods and textiles to spices. 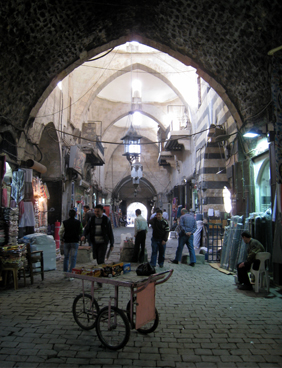 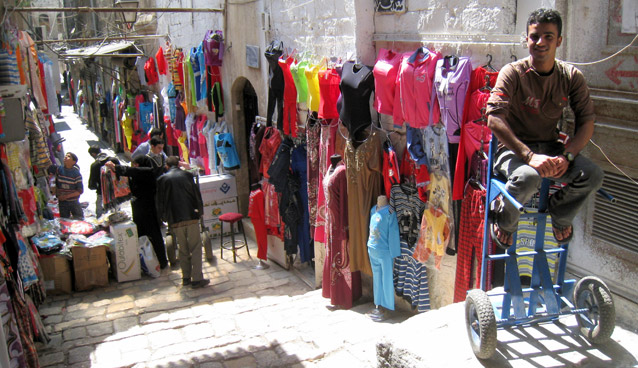 A porter relaxes on his hand-truck at the Aleppo Souk. 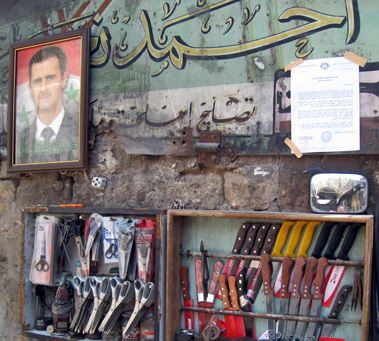 Scissors and knives for sale at the Aleppo Souk. 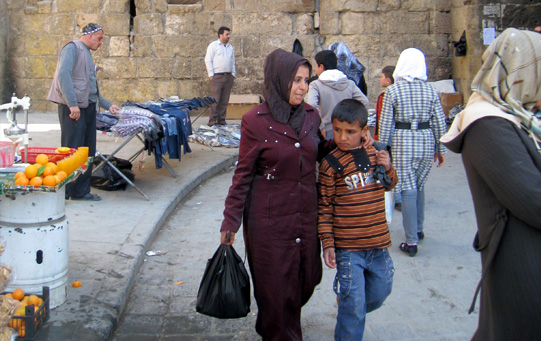 Fruit and clothing hawkers outside the souk’s main entrance.

The first visit to Aleppo Souk was a brief one. We searched for a well-known elixir of our childhoods – ginger ale or 7 Up – that might soothe an upset stomach. 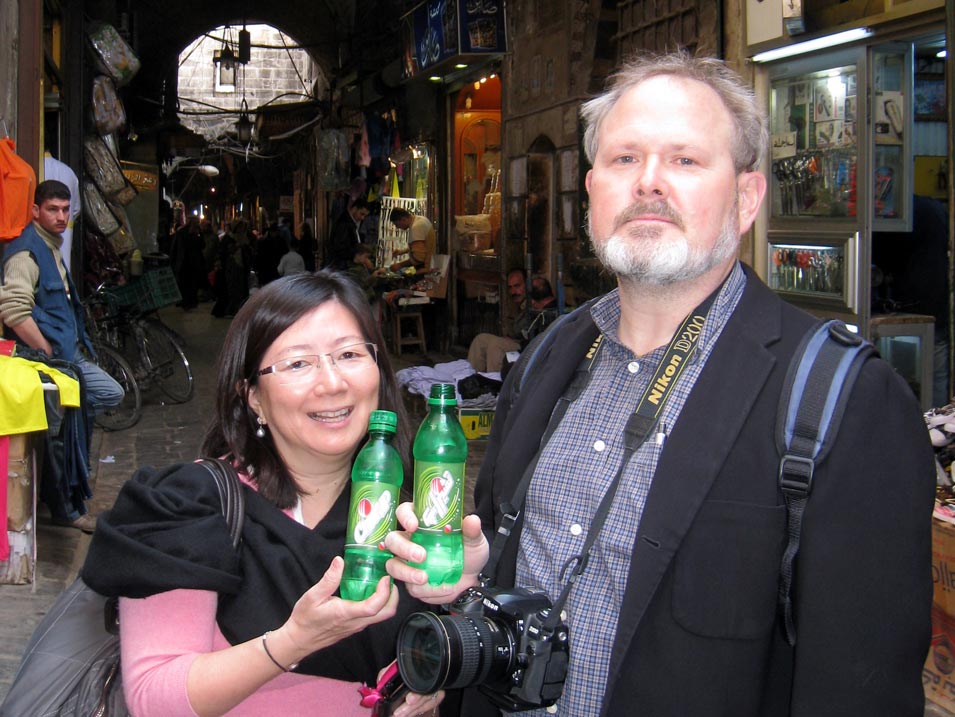 A refreshing 7 Up substitute found in the Aleppo Souk.

We passed by the souk’s jewelry section and shopped for ornate rings and bracelets and good luck, “evil-eye” pendants. 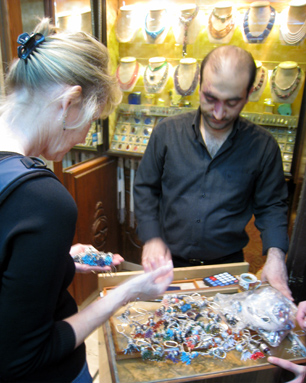 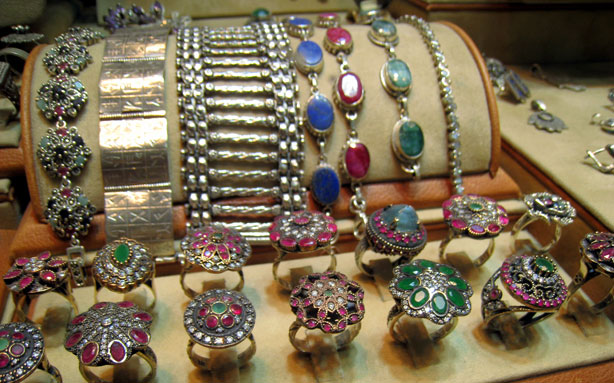 Anywhere you travel in this world you will find locals playing football. Aleppo is no different. Teenaged chums, Mohammed and Mohammed, paused their game to chat with me and pose for a photo in front of one of the entrances to the Aleppo Souk. 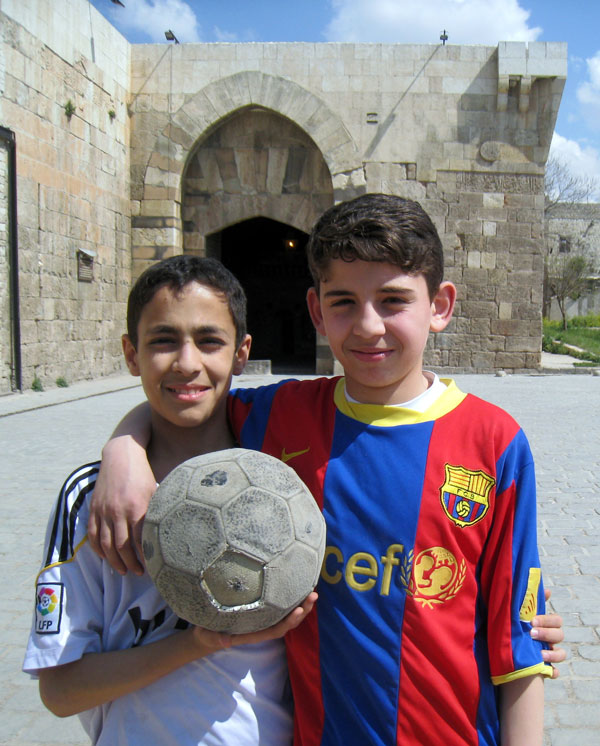 A few miles from Aleppo are the hills where human beings first domesticated wild grasses. All the wheat we eat originates from those plants and the first farmers. Once those hunter gatherers settled, they set in motion developments that led to towns and then markets. Aleppo was one such place and its souk lay on the first great trade routes, becoming part of an economic engine that made astonishing new products available to more and more people. The warehouses filled up with soaps, silks, spices, precious metals, ceramics and textiles, especially the colourful and diaphanous type favoured by harem-dwellers. Eventually all this mercantile activity focused into one particular area and a fabulous bazaar was built, mostly in the Ottoman heyday of the 15th and 16th centuries. It was a honeycomb of surprises and flavours, a tribute to the best aspects of human society.

It’s a place that so effortlessly encapsulated everything that was light, vivacious, sociable and friendly. Architecturally the bazaar was not unique. What it had was tradition, heritage, and incredible diversity. Five hundred years after Shakespeare made Aleppo souk the epitome of a distant cornucopia, you could still buy almost anything here, eat and drink a vast range of dishes, and even bathe in the traditional Hammam Nahasin. There were eight miles of lanes linking a range of khans or caravanserai – the British Consul held court in one of them well into the 20th century. When I first wandered in via the gate near the Citadel, I discovered that there was only one thing I could not find in there: the desire to leave. It was just too diverting and fascinating. Every shopkeeper seemed to want to have a chat over a glass of red tea. [3]

Our appetites had returned! The day before departing Aleppo we spent a late afternoon and evening at an outdoor restaurant in the lovely plaza across from the entrance to the Citadel. We ordered a mezze (appetizer) platter accompanied by lime-mint drinks. There was no need to order a main course. 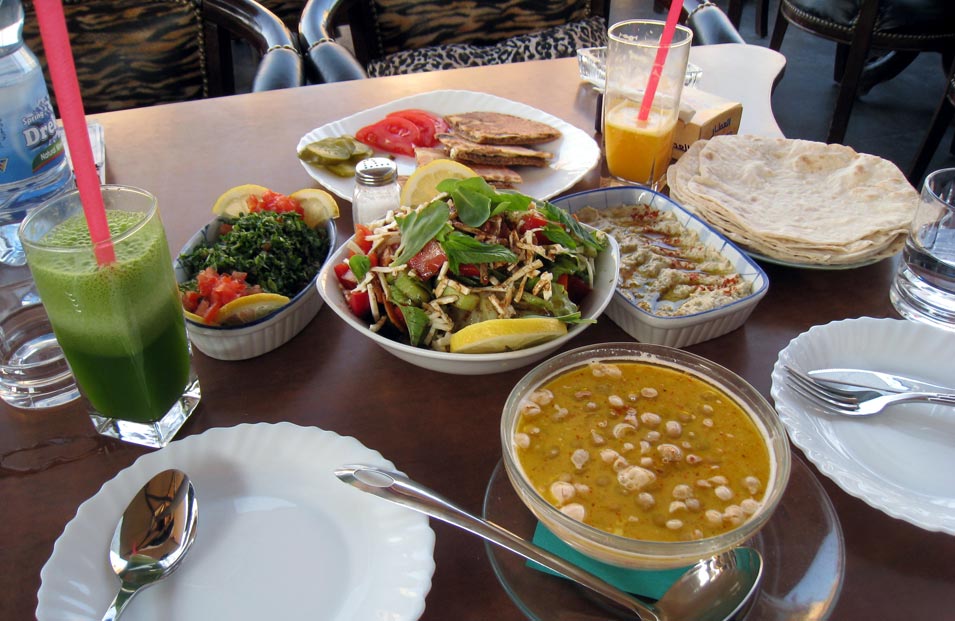 As the light faded and floodlights illuminated the Citadel, the plaza came to life with locals, young and old, strolling and meeting friends on their evening constitutionals. 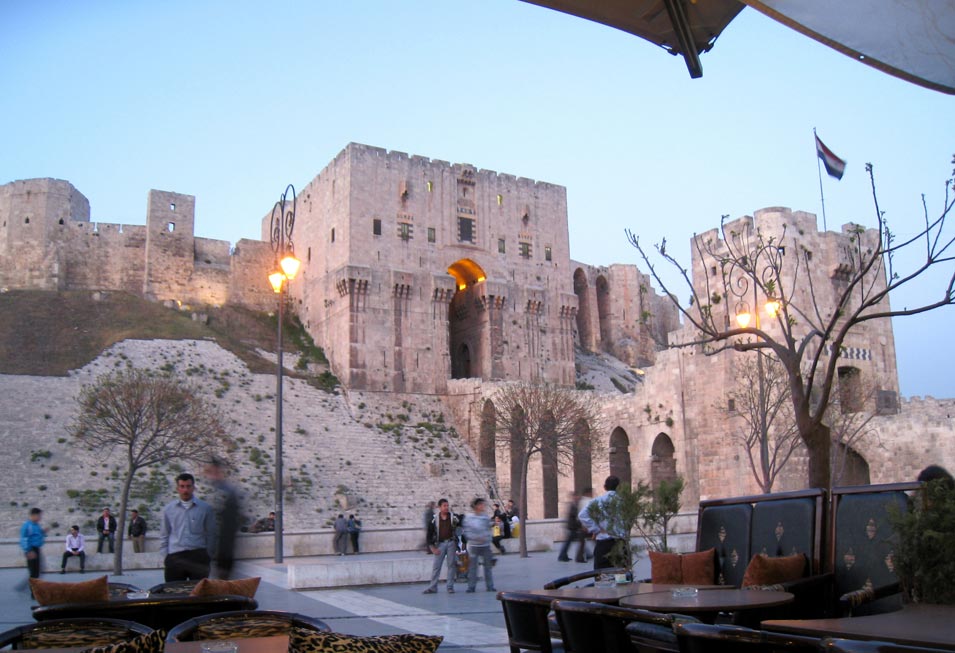 The Citadel as evening approached.

The next morning, we had to keep to our itinerary and return to Damascus. It would be a five- or six-hour drive. Our luggage was loaded onto a cart to take to our van. We bid a fond farewell to the staff at Beit Salahieh who had taken such good care of us.

Regretful that we had not been able to see more of Aleppo, we were grateful for what little of this breathtaking city we were able to experience. 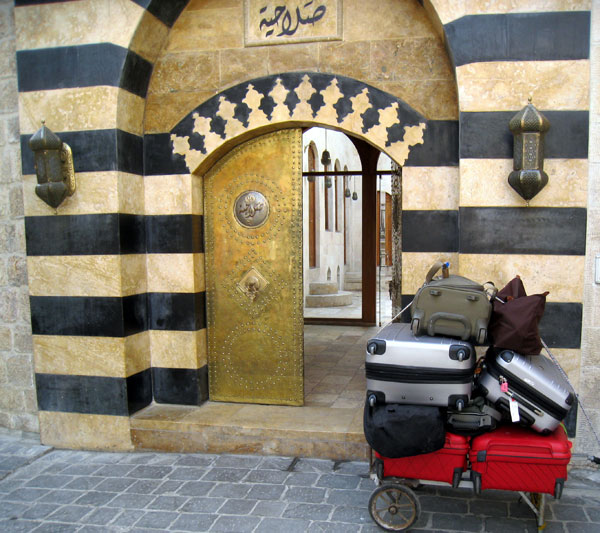 Checking out: our luggage in front of Beit Salahieh.

During the conflict, the Syrian Army used the Citadel as a military base, and according to the opposition fighters, with the walls acting as cover while shelling surrounding areas and ancient arrow slits in walls being used by snipers to target rebels. As a result of this contemporary usage, the Citadel received significant damage. [4]

Fire swept through the old central souk, or marketplace, of Aleppo, Syria, damaging a vast and well-preserved labyrinth of medieval storehouses, shops, schools and ornate courtyards as fierce clashes between security forces and insurgents vowing to carry out a “decisive battle” for the city continued.

For many residents, the old city, with the souk at its center, is the soul of Aleppo, one of the world’s oldest continuously inhabited cities and Syria’s largest. Aleppo has been staggering for months under a bloody battle that has reduced some residential areas to rubble.

Serious damage to an area that Syrians widely consider one of their greatest treasures is likely to stir anger at both sides — each of which blames the other for the destruction in the city — in a conflict that seems mired in stalemate.

“Our hearts and minds have been burned in this fire,” said a doctor in Aleppo who gave her name only as Dima. “It’s not just a souk and shops, but it’s our soul, too.” [5] 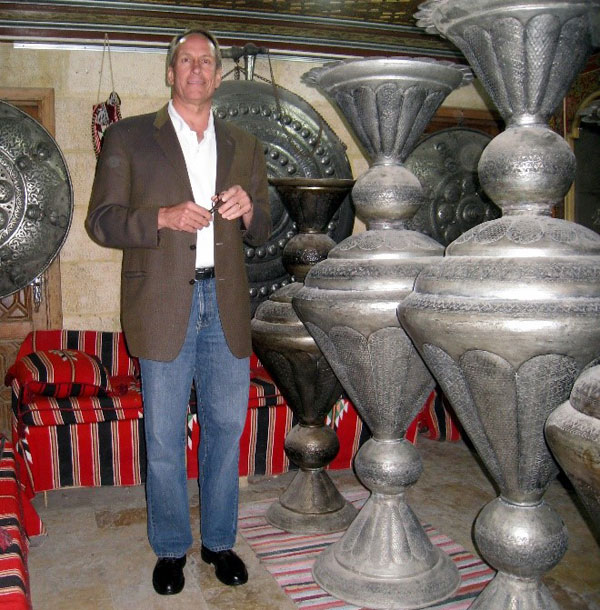 The author in the Aleppo Souk.