Students Get a Lesson on Renewables in Visit to Company 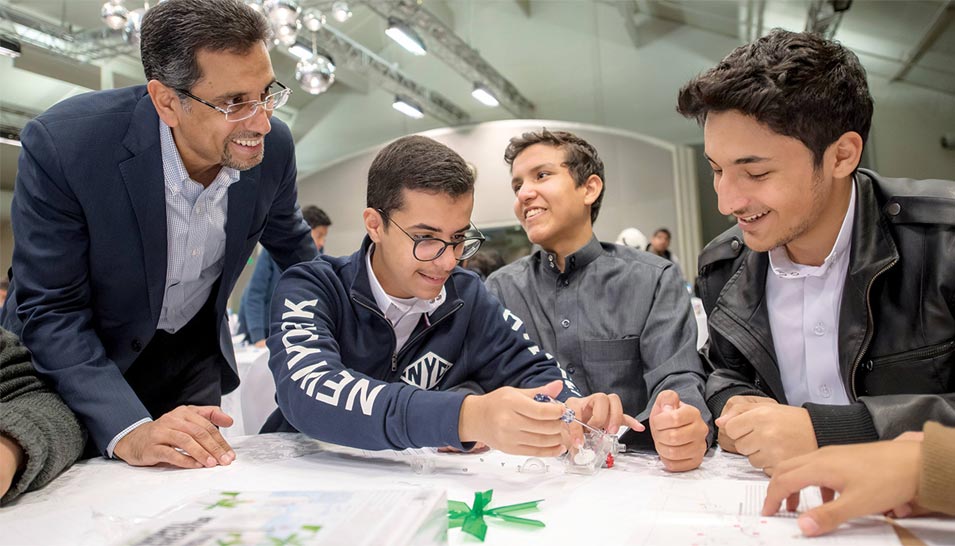 The goal of the meeting was to introduce renewable energy to inspire the students who have a desire to work in this field. Approximately 100 students attended the meeting, which included a number of presentations to introduce renewable energy, its sources, and the means of exploiting it. A pair of interactive activities were held that allowed the students to assemble and operate a wind powered turbine. They also participated in a workshop in which they expressed their opinions regarding renewable energy sources applications in the world. The students then toured the Energy Exhibit at King Abdulaziz Center for World Culture (Ithra) and got acquainted with the history and details of the energy industry in the Kingdom.

Abdulkarim A. Al-Ghamdi, vice president of Power Systems, welcomed the students, describing them as makers of the future and stressing that the renewable energy program is the first-of-its-kind, and is part of Saudi Aramco’s contributions to serving society. He said Saudi Aramco’s initiatives in renewable energy are key enablers for the Saudi Vision 2030, and are aligned to support the Kingdom’s strategic transformation. In 2023, the Kingdom is expected to produce 23 gigawatts (GW) of power from renewable energy sources, and 60 GW by 2030. The Kingdom also plans to invest in manufacturing solar panels, wind turbines, and geothermal energy from deep underground.

“Saudi Aramco is a pioneer investor in renewable energy inside the Kingdom of Saudi Arabia,” Al-Ghamdi said. He noted that the company’s Al-Midra building in Dhahran is supplied with energy through solar panels — the largest building supplied by renewable energy in the Kingdom of Saudi Arabia. In addition, Saudi Aramco is among the first to invest in wind turbines in the Turaif Governorate that produces around 2 GW, supplying 2,000 houses with energy.

Waleed S. Al-Qahtani, head of the Project Engineering Division, said the program will continue to attract other schools from various cities in the Kingdom as the company seeks to introduce students to renewable energy.

Students at the Prince Sa’ud Educational Complex said the meeting was a rich experience that they will relay to their families and friends as it answered many of their questions about this topic. One student said: “The meeting had an impact on my choices regarding university study. Now I am determined to pursue my study in this vital field.” Ahmad Al-Zahrani from King Fahd University of Petroleum and Minerals (KFUPM) said he thought that renewable energy was used on a limited basis and that he had never seen a turbine, other than the miniature turbine on display at KFUPM. “Only today have I known that in the Kingdom, specifically in Turaif, there is a turbine facing the wind to produce energy to provide homes with electricity.”