A lone airport runway deep in the heart of the Rub’ al-Khali is no small undertaking, even when it comes to an upgrade of facilities. The Shaybah airstrip refurbishment was recently completed, allowing uninterrupted service at the company facilities in the remote location.

These are just some of the impressive statistics Saudi Aramco generated to achieve the ahead of schedule upgrade of the Shaybah airport runway, which welcomed its first touchdown on April 9, with the formal reopening celebrated on April 16. But statistics only tell half the story. The Shaybah airport runway upgrade shows the deep commitment and ability of Saudi Aramco’s people to come together to deliver exceptional outcomes, drawing on skill sets from across the company.

The project implemented all the recommended Value Improving Practices, and fully leveraged the recommendations that resulted from workshops, including Constructibility, Risk Management Project Planning and Team Alignment, and Project Definition Rating Index. The application of these practices enabled the project team to proactively establish mitigation measures for potential project execution challenges. The full commitment to corporate values were the seeds for meeting project objectives with safe and early completion.

Fahd H. Cynndy, manager of Saudi Aramco’s Aviation Department, praised the whole team, and captured the mood of the project when he said that it was a real testament to the commitment and care for fellow colleagues that saw the project through to a timely and safe completion.

Surrounded by sand dunes (with heights in excess of 175 meters) and embedded on two connected salt flats, the Shaybah airport is nestled in the awe-inspiring landscape of the Rub’ al-Khali (the Empty Quarter). It is also one of the harshest environments on Earth, which takes a serious toll on infrastructure.

The Shaybah airport’s runway is no exception, exposed to blistering conditions and pounded by the corrosive sands of the Empty Quarter. After many years of service, it was time for a refurbishment of the airstrip itself, which handles aircraft from across the Saudi Aramco fleet, and also aircraft up to the size of a Boeing B767.

Removing from service the main transport artery for the natural gas liquids plant, gas-oil separation plants, and related infrastructure that delivers millions of barrels of oil and liquids every day was a serious undertaking, not to mention the demands placed on employees and contractors. This was because rather than landing in the center of Shaybah, a new way in — and out — needed to be found during refurbishment, which was a government airbase 90 minutes away, through a challenging, winding, one track road. 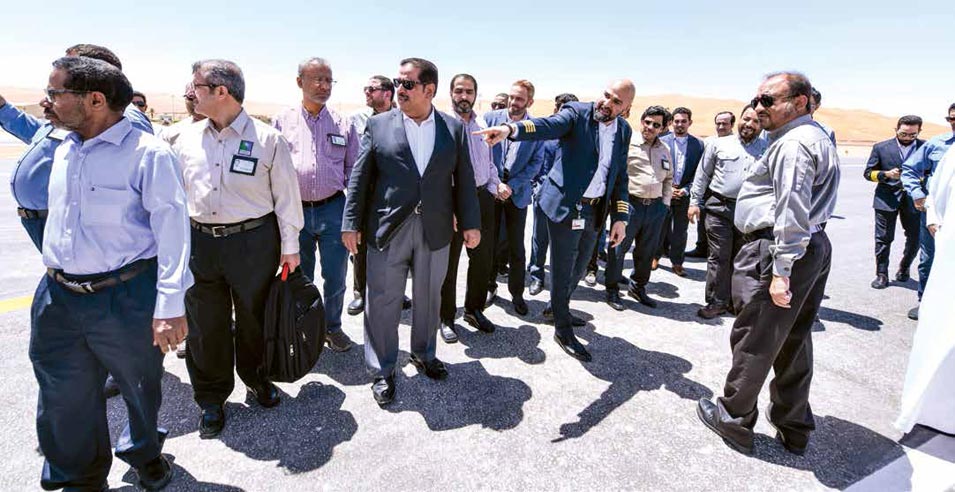 Fahd H. Cynndy, Aviation Department manager, (pointing) discusses the improvements made to the Shaybah airstrip with Sultan Al-Ghadery, manager of Transportation and Equipment Services, (in suit jacket and sunglasses) and members of the project team, during its opening ceremony on April 16. The Shaybah airport runway upgrade shows the deep commitment and ability of Saudi Aramco’s people to come together to deliver exceptional outcomes, drawing on skill sets from across the company. (Photos: Moayed Al Qattan/MPD)

Plans for the refurbishment started with several studies led by both the Aviation Department and the Facilities Planning Department, also working in conjunction with King Fahd University of Petroleum and Minerals. A decision was made to resurface the 10,000-foot runway using the rubblization method, which includes using the concrete already in place as the base layer. This meant that rather than disposing of it as waste, the concrete is chopped and broken up by specialist equipment to form a base layer for asphalting. This method was used once before in the Kingdom, at Jiddah’s King Abdulaziz International Airport, but this was a first for Saudi Aramco.

A Study in Time and Motion

With so many people and business processes reliant on the Shaybah airport, meeting the twin goals of speed and safety were paramount in the project. Everyone played a unique role in achieving them.

“When every day counts, completing the refurbishment of the landing strip in only 77 days was a remarkable achievement, significantly ahead of schedule,” said Nezar H. Al-Khalifah, division head of the Shaybah Crude Increment Projects Division.

This is particularly true when you consider the logistics required to support the shutdown of the landing strip while the refurbishment was underway. Getting people in and out of Shaybah securely and safely was a logistical challenge that the Shaybah Aviation Group and the Shaybah Transportation Division tackled together.

“The team made zero mistakes and we had zero delays,” said Shaybah Terminal group leader Faleh H. Al Subaie, with Aviation facilities engineer Mohammed S. Almaqbal in firm agreement. “This included coordinating fleets of buses to collect passengers at Shaybah, who were checked onto the buses using the same method as if they were checking onto a plane, to ensure all security protocols were met.”

In a convoy, and with the assistance of outriders ensuring a clear path through the winding, single road to the nearest government airbase, fleets of buses made 1,800 trips back and forth across the challenging Empty Quarter landscape over the 77 days of refurbishment. Doing this without incident was indeed a remarkable achievement.

“Working daily extended hours, the commitment of our people to ensure the safe and secure transport of over 40,000 personnel during the refurbishment was an inspiring site to behold, and brought us all even closer together,” said Al Subaie.

“Every day of the refurbishment, Shaybah personnel were keen to get an update. It was understandable, because with the airstrip out of action, many more hours were added to their commute to and from home, so the team obviously wanted to complete the project as quickly as possible,” said project engineer Helder Martins.

“This reveals one of the key factors for the project’s success: unprecedented project stakeholder engagement, where all the stakeholders were pushing in one direction to deliver the project in the shortest time possible. This meant we worked around the clock, seven days a week, including Saudi Aramco organizations and personnel, and with the firm support from our contractor Sinohydro Corporation, and their project manager, Rami Al-Hassan, and construction manager, Esam Omran.”