Although retired only three short years, my wife and I jumped at the chance to return to Saudi Arabia to attend the KSA ExPats Reunion in March 2019. Saudi visitor visas were rare and difficult to obtain at that time, but Aramco seamlessly arranged visas for the reunion attendees.

Reunion planners, led by Ali Baluchi, Chairman of the 2019 KSA Reunion, came up with a wonderful array of organized activities spread over the two-week reunion period. There were guided tours of the Center for World Culture (Al Ithra), a trivia night, walking tours, and desert excursions. There were shopping trips, visits to local museums, luncheons and dinners, and an afternoon at Half Moon beach. Further afield, attendees could sign up for multi-day outings to Mada’in Saleh, Riyadh, and Shaybah.

One such destination was entitled, “Adventures in Abha, Asir Region.” A close friend assigned to Aramco’s Jazan refinery and terminal project had told us how much he had liked his visits to neighboring Asir. We thought that the three-day, two-night trip to Asir might be the highlight of our fortnight in the Kingdom. We were right.

The Asir is located in the extreme southwest of the kingdom and shares a border with Yemen. Due to its temperate climate and abundant seasonal rainfall, Asir has long been a prosperous agricultural region. The economy also benefits from the raising of cattle, sheep, goats, and camels. Ruled and protected for centuries by Baghdad and Yemen, Asir enjoyed 150 years of independence before being occupied again, this time by the Ottomans, in the late 1800s. Soon after World War I and under pressure from Yemen, the sheikhdom joined forces with King Ibn Saud in 1926 and was assimilated into the kingdom soon thereafter.

Today, Asir is a unique corner of the kingdom, famous for its lush greenery and mountainous terrain. Nearly every winter, followers of social media will see beautiful videos from Asir. “Snow is falling in Saudi Arabia? Unbelievable!” To escape the heat of summer, Asir is a popular holiday destination. In 2020, with the travel restrictions, many residents around the kingdom–Saudis and foreigners alike–made their way to Asir, usually by car.

At the time of the 2019 reunion, Saudi Tourism was preparing to open the kingdom to tourism and streamline the process of obtaining a visitor visa. Our Asir excursion was viewed as a sort of dry-run to test how a large tour group would fare and to prepare the Asiri locals for future tourism. 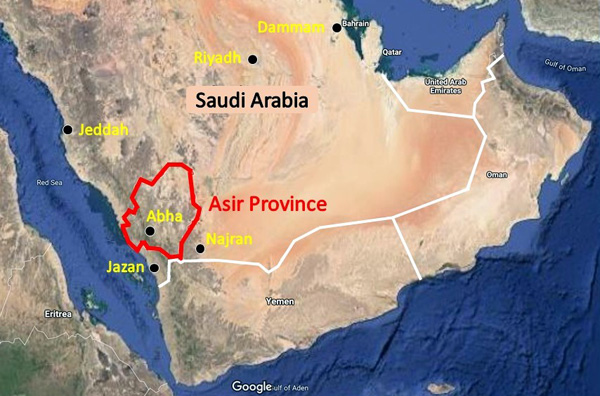 From their hotels near the Mall of Dhahran, fifty annuitants, spouses, and dependents boarded Aramco coaches in the early afternoon and headed to the Aramco airport for the flight to Abha city airport.

Mingling and getting to know one another swiftly commenced. Some old-timers shared stories of having been to Asir before on scouting trips when they were teenaged Aramco brats. The flight on our own 737-800 was flawless and the hospitality onboard did not disappoint.

Upon arrival at Abha’s tiny airport, the well-traveled group deftly negotiated the usual chaos of baggage claim and boarded two luxury coaches. Already this place felt different from the Eastern Province. Local men in colorful traditional dress with flower garlands in their hair appeared here and there.

After checking into comfortable rooms at the Blue Inn Hotel, Abha, the group assembled for a late dinner in the hotel’s restaurant. 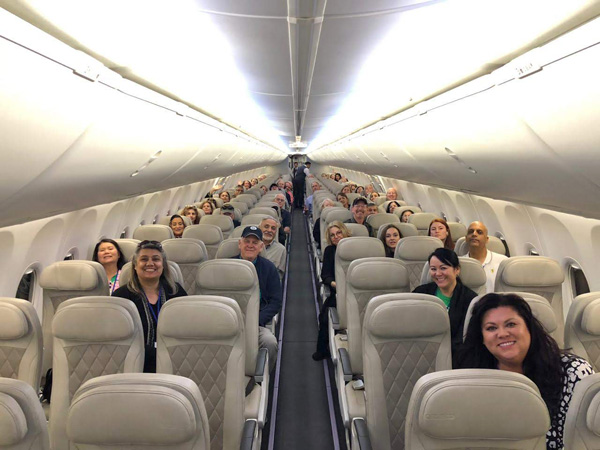 Aboard the Aramco jet enroute to Abha, Asir.

Quite unlike the Eastern Province, Asir is known for its breathtaking mountainous landscape. On the 30-minute drive up to the summit of Souda Mountain, the two-lane switchback road from Abha city gave way to terraced wheat and barley fields surrounded by low stone walls and very few trees. At the top, the air felt thinner and there was a chill in the breeze.

The buses parked in a large dirt lot where a fleet of SUVs was waiting to take us down the steep incline to the stone village of Al Rijal Alma’a. But first, we were given time to explore the ridge overlooking the valleys that lead to the Red Sea. The view was impressive.

Large troops of Hamadryas baboons, young and old, kept a careful distance but watched us intently, perhaps hoping for something to eat. The white, fluffy fur around their shoulders and faces belied what appeared to be very long, sharp teeth.

Sparse juniper trees, gnarled by the constant winds, lined the ridge’s edge. The first of several group photos was arranged here. Part of the group had wandered a short distance down the ridge and assembling everyone took some doing. Mission accomplished, we then were instructed to board awaiting SUVs, mostly Explorers or Suburbans. We hopped in, introduced ourselves to the local driver, and were off down the mountain. 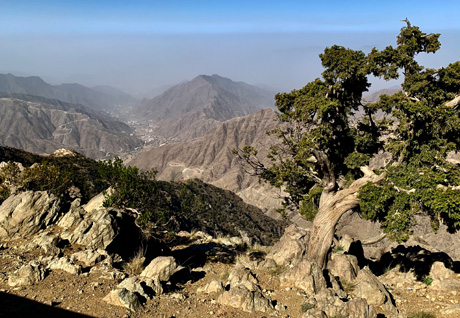 View from Souda Mountain. The valleys below lead to the Red Sea. © Mark Lowey. 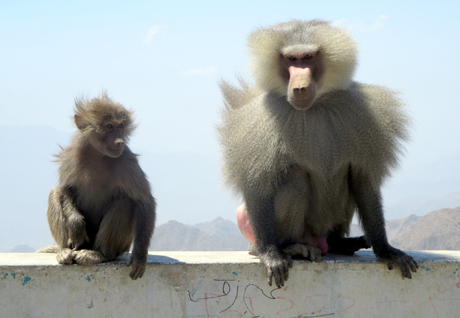 Famous for its multi-story stone buildings built into the mountainside, Al Rijal Alma’a is one of the highlights of the Asir Province. The village is built from natural stones, clay, and wood. Its windows and doors are accented with bright white quartz.

For centuries, Al Rijal Alma’a played an important role in trade between Yemen and the Hejaz Region and was an important route from the Red Sea to Mecca and Medina. The local people were notoriously independent and famous for their successes in battles against the Ottoman occupiers who managed to occupy some parts of the Asir but were repelled from Al Rijal Alma’a.

We were welcomed into a large majlis, where we were sat in typical long sofas lining the walls. Soon, we were served sweet tea, dates, and a local porridge dish. The village head invited us to visit the museum shop and to freely explore the rooms and terraces that have been restored to their original condition. 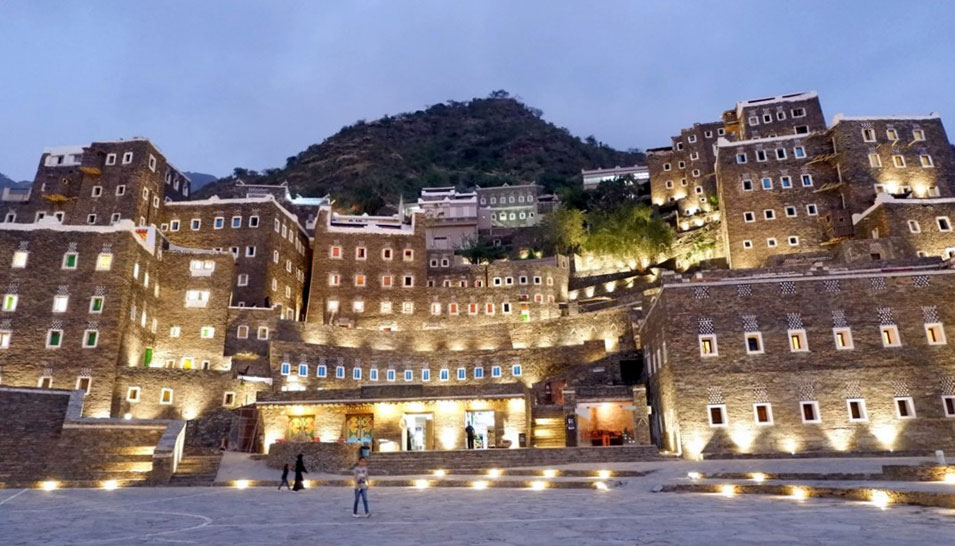 Originating in the Asir Region is a traditional style of Arabic art, typically painted by women in the entrance to a home. Al-Qatt Al-Asiri painting (also called nagash painting or majlis painting) is wall paintings in the form of a mural or fresco featuring bold geometric designs in bright colors on what would otherwise be monotonous white walls. The wall designs are often considered a mark of pride for the woman of the house, reflecting her artistic sensibilities.

Fatima Abou Qahas, who passed away in the early 2000s, was one of the most famous wall painters in Asir. Because she had been widowed at an early age with four children to support, she had to paint for a living.

Fatima Abou Qahas’ protégés include Fatima Al-Almaai, who was inspired to preserve this valuable tradition. The founder of the Fatima Museum, Al-Almaai and her husband Ali Moghawi run workshops and informative lectures at their facility that includes exhibits of Al-Qatt Al-Asiri painting and a gift shop. 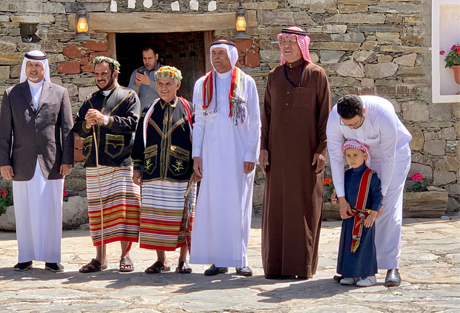 Ali Moghawi, head of the Fatimah Museum (center, in white) and his staff welcomed us. © Mark Lowey. 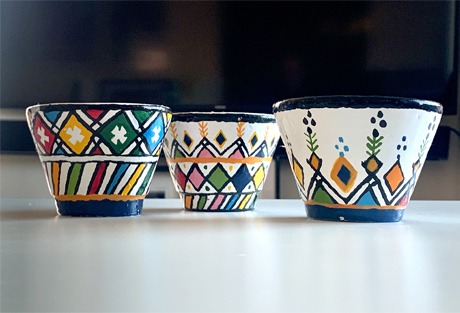 On the western edge of Abha city is the quiet neighborhood of Al Muftaha, where you can find the Art Village and the Tuesday Souq. The Art Village was founded by the government in 1989 to promote local artisans. Featuring displays of the artistic culture of the Asir region, the interiors of the shops and galleries reflect the local style, and many include the Al-Qatt Al-Asiri art form. Small museums on either side of the mosque tell the story of Abha’s artistic heritage, including how local families achieved status by the quality of the murals in their homes. Other shops offer locally made handicrafts and antiques.

A short stroll from the Art Village is the expansive Tuesday Souq. Different sections of the souq offer honey, fruit and vegetables, spices, birds, potted plants, clothing, and handicrafts. 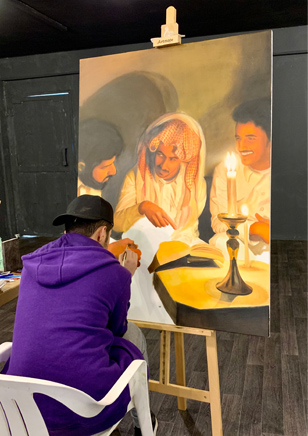 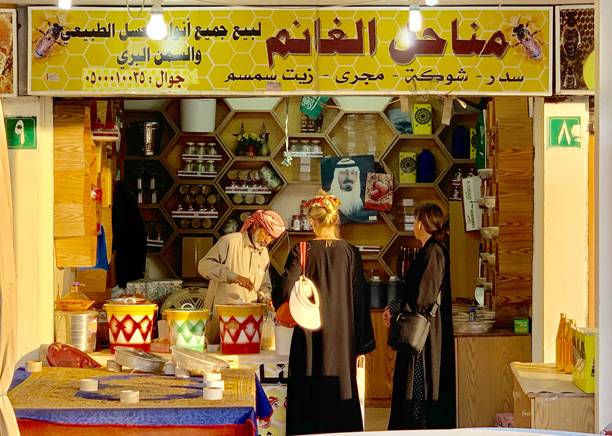 A unique touristic landmark, Jebel Thera, or Green Mountain is a modest hill in the south of Abha city. At night it is illuminated by neon green lights that emit a warm glow. There is a Lebanese restaurant and cafe with a terrace and panoramic views. 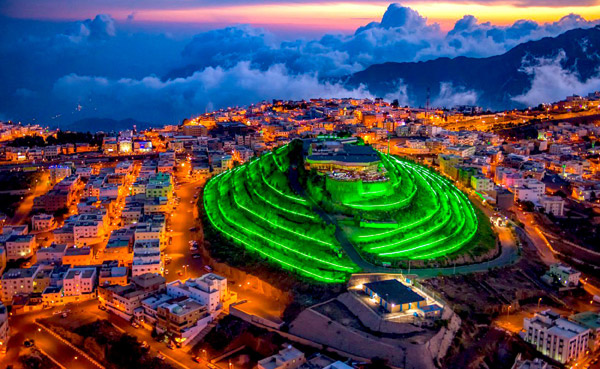 The Hanging Village of Al Habala

Also known as the Rope Village, Habala (rope, in Arabic) was inhabited by refugees of the Qahtani tribe who fled the Ottoman Empire some 400 years ago. The village was accessible only by rope ladders. A series of sandstone dwellings are perched part way down a sheer cliff. Residents grew their food on small, terraced plots and lived there until the 1980s.

It can now be accessed by a cable car that reportedly operates from May to October. We enjoyed the awe-inspiring views from the top. 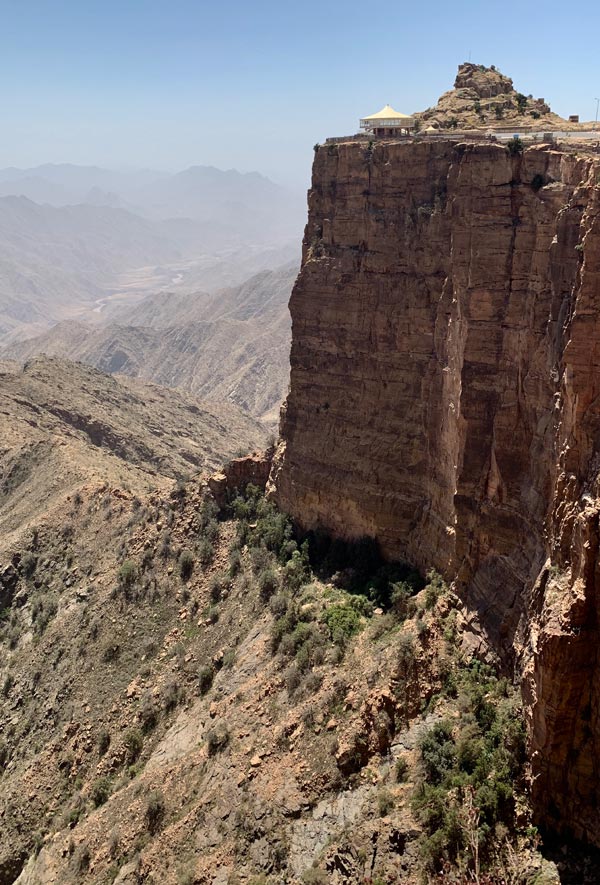 One of the most fascinating museums in Asir, Tamniah is surrounded by an abandoned neighborhood of stone and mud-brick buildings. Inside is a maze of exhibits and displays of antiques, artifacts, and artwork. There are three stories of beautiful rooms to explore, many decorated with the local Al-Qatt Al-Asiri style. 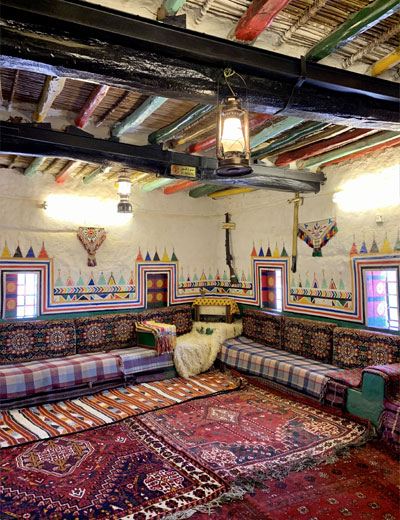 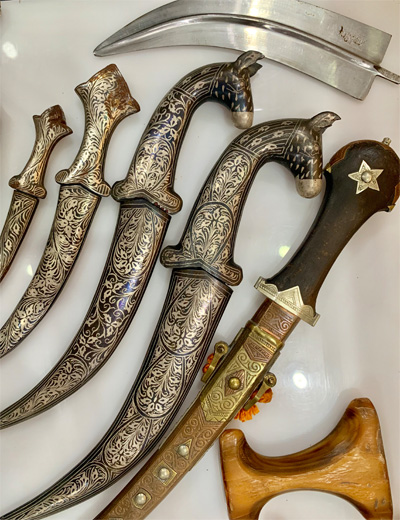 Some of the antiques on display at Tamniah Museum. © Mark Lowey.

It was lunchtime, and we were shuttled up the mountain from the Tamniah Museum to Al Jarah Park. Previously a private refuge for the Royal Family and government officials, the forested area has been opened to visitors.

We were greeted by a band of traditional dancers and musicians and we were served sweet tea and dates in the majlis tent. The dancers invited some of the tourists to join in the sword dance. Later a sumptuous meal was served including barbequed meat and local delicacies. 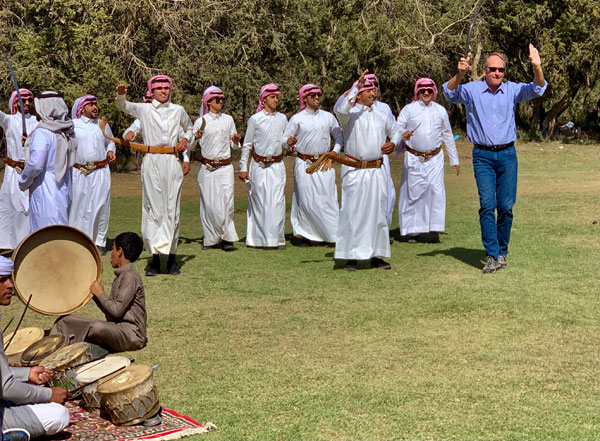 Al Yanfa is an exceptional example of a well-preserved Asiri village. The early residents created a network of tunnels and passageways beneath their elevated houses. Visitors can wander under the low timber ceilings and past tiny wooden entrance doors and then emerge into a small central plaza next to the main mosque.

Like many old structures throughout the region, Al Yanfa’s multistory mud buildings are embedded with horizontal rows of overlapping slate slabs that prevent erosion of the exterior walls by deflecting rainwater. Roofs are protected from the elements by steel covers. 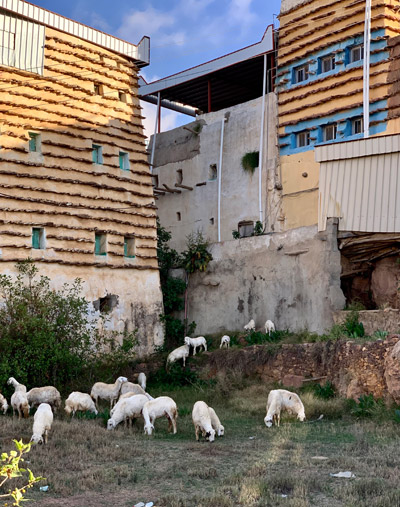 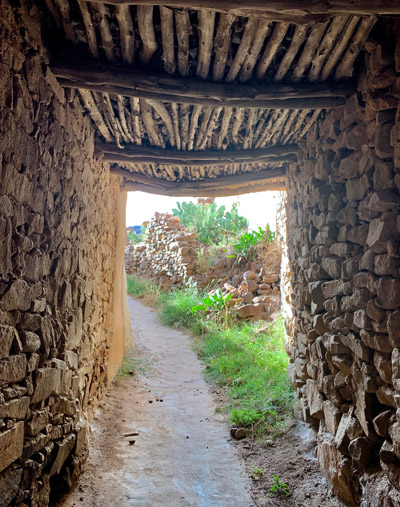 Passageways below the houses of Al Yanfa. © Mark Lowey.

After two days full of the astonishing sights, tastes, and sounds of Asir, the trip culminated with a final celebratory feast at the extraordinary Bin Hamsen Village restaurant-museum in the city of Khamis Mushayt, east of Abha.

Before dinner, we explored the labyrinth of decorated rooms and historical exhibits. Many of us were now familiar with, and able to identify, the distinctive patterns and icons of Asiri culture.

At large round tables laden with local dishes, glasses were raised in gratitude to our guides and volunteer organizers. Over a long, leisurely dinner, lively conversations could be overheard about growing up in Saudi Arabia, about memories and friends old and new, and about this remarkable trip of a lifetime. 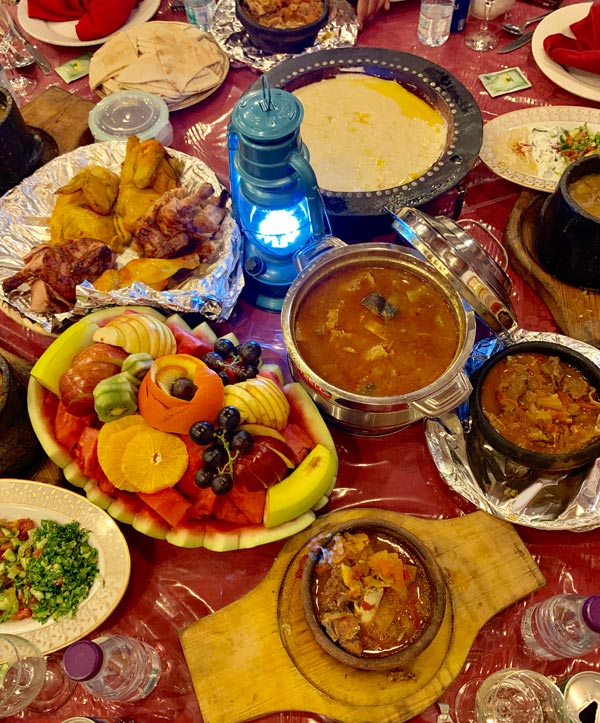 Before heading to the airport, the group enjoys a delicious feast in Asir. © Mark Lowey. 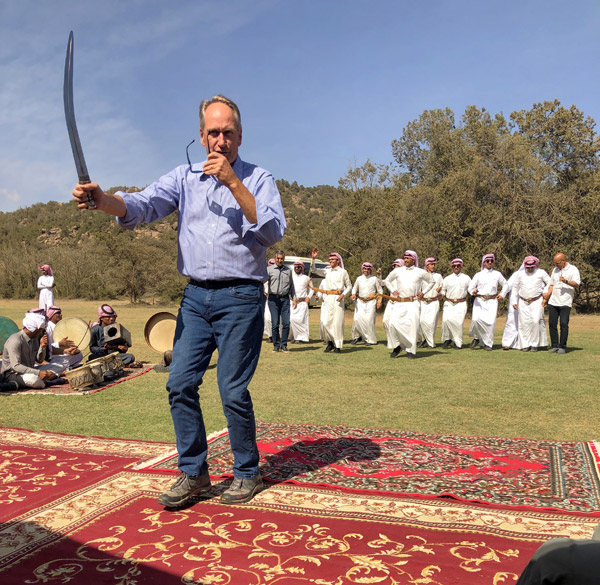 Mark Lowey was invited to the sword dance during the Asir tour.