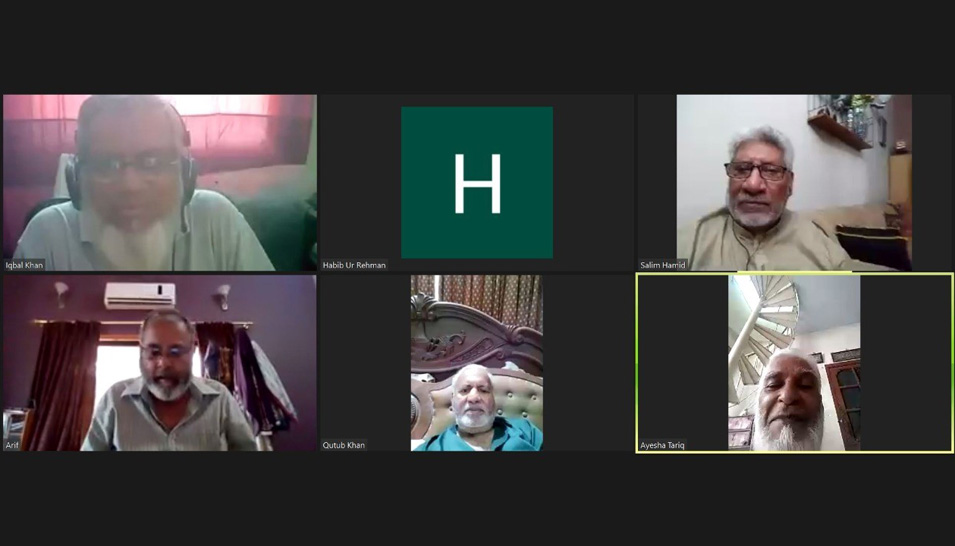 SAEEA first Online Progress Meeting held under Zoom on June 28, 2020. This is because of prevailing viral disease all over the World. The last meeting of SAEEA was held on March 14, 2020 and now the main purpose of the meeting was to minimize the gap between office bearers, update activities of SAEEA and get welfare of all SAEEA members. The meeting started at 2:00 pm the following managed on line connections. Matin and Shafiq could not be connected because of some technical problems.

The meeting was started by the recitation of few verses from Holy Quran by KAF. The president indicated few of his close friends and relatives who left us during last few months period. Latest was Syed Munawwar Hussain. He prayed for all of them for their forgiveness.

The president got the welfare of all the attendees about their families and other relatives. He advised all office bearers to follow the required.

IAK-explained that the primary amount purchasing the domain and launching for the development of SAEEA New Website was transferred to the CEO of the company. Right after that the Covit-19 started and the progress was delayed.

GQK-explained that he is in contact with the website developer and as per his discussion he stated that their three web developers Covit-19 were affective and were all positive so there was a delay in response. A promise was made by CEO to send us a demo of the website in few days. KAF also stated that he will also follow from his side as well.

MSH-Stated about the details of SAEEA Accounts. He further stated that it will be not possible to collect the annual subscription for 2020-2021. It was decided to collect the subscription once all is normal and we will review that how many events can be done in the remaining period of the year.

AQ-Stated that because of current viral situation it looks that in near future it will be very difficult arranging any event. Once all is normal then we will work on the 22nd Reunion of SAEEA.