The Nile, forever new and old, Among the living and the dead, Its mighty, mystic stream has rolled.
(Henry Wadsworth Longfellow) 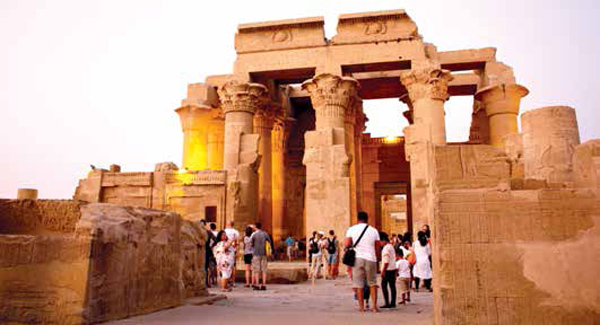 After four long months of planning and organization, the Saudi Aramco Employees Association was able to offer a fascinating Egyptian itinerary, including a cruise along the Nile from Aswan to Luxor.

The journey started in Aswan, where a group of traditional instrument players and a dervish dancer warmly welcomed us. From there, we visited the Aswan High Dam. It lies just north of the border between Egypt and Sudan. It is a huge rock-filled dam that holds back the world’s longest river, the Nile, creating the world’s third-largest reservoir — Lake Nasser. The dam was completed in 1970, after 10 years of work to avoid annual floods.

Soon after we visited the unfinished Obelisk, laying as a sleeping giant in a bed of granite; it is an incredible look at the building methods of these monolithic monuments. Archaeologists are unsure which pharaoh created this structure. It just so happened that perhaps the builders got a little greedy about their capabilities, as it would have been one-third larger than any previously erected obelisk had the work gone to completion. Instead, a huge crack appeared as it was being freed from the bedrock, causing it to lay abandoned.

In the evening, we were able to enjoy this special corner of the world in the most romantic way, on a traditional felucca carried by the current and gusts of wind, captured by a triangular sail hanging from a nine-meter high mast. We sailed along the shores of Elephantine Island, with the ever-changing hues of light over the river at sunset. We also visited the colorful Nubian Village, a place with a rhythm of life that is now beyond our time — a window on a world that seems frozen in time.

The day after, we woke up early in the morning to reach the Abu Simbel temples, which were built by the pharaoh to celebrate his victory against the Hittites in the battle of Kadesh in 1274 BCE and to intimidate his Nubian neighbors. These are now part of the UNESCO World Heritage Site. Built to withstand the test of time and to impress anyone who came to visit them, they pay homage to Ramses II as a god and his wife Nefertiti. The Abu Simbel temples, still today — 3,000 years after their construction — excellently continue to perform this task.

Once back on the cruise, we sailed to Kôm Ombo, which stands on the west bank of the Nile, 40 kilometers from Aswan, between the maize and sugar cane. Kôm Ombo was built where the ancient city of Pa-Sebek once stood — the heart of the cult of Sobek — the crocodile-god of water and floods. Located on a small hill, with a splendid view of the Nile and the island of El-Mansuriyah, the temple of Kôm Ombo stands on the remains of an ancient place of worship, commissioned by Thutmose III in the Ptolemaic period.

On Sunday, we reached Edfu and we visited its evocative temple. This Ptolemaic temple, built between 237 and 57 BCE, is one of the best-preserved ancient monuments in Egypt. Preserved by desert sand, the temple is dedicated to Horus, the avenging son of Isis and Osiris.

In the evening, we went to Karnak — an extraordinary complex of sanctuaries, kiosks, pylons, and obelisks dedicated to the Theban triad, but also to the greater glory of pharaohs.

In the night, through a magical festival of lights, we saw the Luxor Temple. Constructed over hundreds of years by Amenhotep III, Ramses II, Tutankhamun, and other pharaohs, Luxor Temple was the largest and most significant religious center in ancient Egypt.

Taking in The Real Luxor

In what was then Thebes, Luxor Temple was “the place of the First Occasion,” where Amon experienced rebirth during the pharaoh’s annually re-enacted coronation ceremony. Today, the remains of this vast complex include the colossal Great Colonnade Hall, 60 meters long, with 28 21-foot-high columns. Its decoration was largely undertaken by Tutankhamun around 1330 BCE.

The last day gave us an exciting experience of flying in a hot air balloon above the city of Luxor and the Kings’ Valley. The Kings’ Valley, also called Valley of the Tombs of the Kings, is a long narrow gorge just west of the Nile River in Upper Egypt. The valley itself does not appear particularly spectacular at first glance — nothing more than a ravine of reddish rock beaten by the sun — but below the ground level are the graves of about 70 pharaohs. The visit is worth it because of the precious wall decorations that cover every single centimeter of the walls of these tombs.

Nearby, we saw the Colossi of Memnon, a pair of gigantic statues that bear witness to the size of one of the greatest Egyptian temples. Each made from monolithic blocks; these giants are 18 meters high.

Our last visit was dedicated to another wonderful temple. Beneath the sheer, stark cliffs of Deir el Bahri, the mortuary Temple of Hatshepsut reveals one of the most extraordinary reigns in Egyptian history. Stepped platforms, pillared porticoes, and vibrant reliefs set against the desert backdrop make it one of the world’s most striking architectural masterpieces, but perhaps even more noteworthy is the woman who commissioned it. The eldest daughter of King Thutmose I, Hatshepsut first assumed the role of queen regent during the 18th dynasty after the death of her husband, Thutmose II.

Although her stepson, Thutmose III, eventually came of age, she adopted the title of pharaoh and ruled for more than two decades. She was one of ancient Egypt’s first female pharaohs.

We took home wonderful memories of our journey along the river cradle of an ancient civilization, full of ancient history, from the era of the Egyptian pharaohs to present-day. What an opportunity for great discoveries, adventures, explorations, and knowledge!