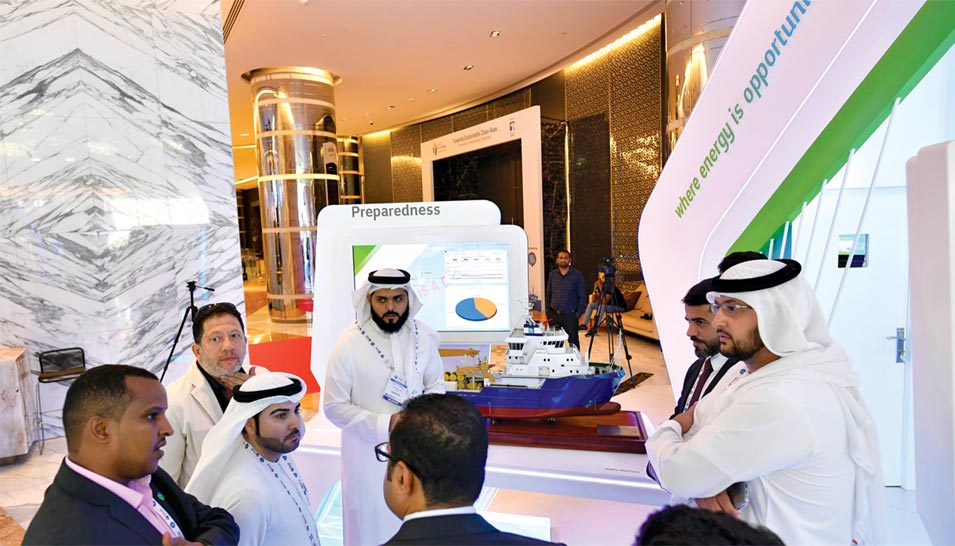 AbdulAziz Somali and Majed Saber from Saudi Aramco’s Marine Department brief visitors at our company’s booth in Abu Dhabi on the oil spill response capabilities of Midyan — a highly capable Marine Pollution Control Vessel that covers the company’s operations on the Red Sea coast. The vessel, which is 70 meters long and 15 meters wide, has two built-in skimming systems with the capability of recovering 100 cubic meters of oil per hour. The vessel also has 2,500 meters of oil booms and a recovery oil tank that can store 3,500 barrels on board.

At a regional meeting of oil companies to discuss methods for environmental stewardship last week, Saudi Aramco shared some of its best practices in the prevention of oil spills, and methods of environmental preservation.

The First RECSO Enviro Spill Conference and Exhibition was hosted by the Regional Clean Sea Organization — a 13-member oil industry co-operative organization formed in 1972 with the objective of accomplishing a cleaner and safer environment.

In delivering the keynote speech at the opening ceremony, Abdulhakim A. Al-Gouhi, vice president of Industrial Services with Saudi Aramco, called on members to collaborate to protect the pristine Gulf environment through prevention, preparedness, and response.

“We come together to demonstrate our unlimited commitment toward protecting the marine environment from any harmful effects of pollution, in general, and of oil spills in particular,” said Al-Gouhi.

He noted that Saudi Aramco demonstrated its expertise in oil spill mitigation at the height of the Gulf War in 1991, when an estimated 8 to 11 million barrels of oil were released in what is thought to be the largest oil spill in human history, and established oil spill contingency plans, response teams, training programs, and oil spill drills that put Saudi Aramco at the forefront of the industry.

But even so, added Al-Gouhi, “the need to pursue research and development in new technologies and more efficient oil spill combatting tools and equipment could not be emphasized more.”

Al-Gouhi additionally noted that a major element to test readiness is by conducting drills and exercises. One such exercise was successfully conducted at the south Red Sea this year that involved all stakeholders, including government, military, and civil authorities, as well as specialized international oil response, tanker, and shipping companies. Response operations included offshore containment and recovery, shoreline cleanup, and aerial dispersant spray by Saudi Aramco.

The conference included 65 speakers, and 30 exhibiting companies representing more than 20 countries. Workshops provided an opportunity for interactive discussions between presenters and delegates on key topics and new technologies for oil spill prevention, mitigation, and response.

Among the Saudi Aramco presentations was one by Andrew Regan, the Marine Department’s engineer, who delivered a presentation titled “Oil Spill — The Impact on the Sea Environment and Waste Management.”

Abdullah O. Tewairqi, manager of the Marine Department, presented recognition plaques to partners and committees. Tewairqi commended members of the team, who presented papers, participated in panel discussions, and manned the booth in the exhibit area.